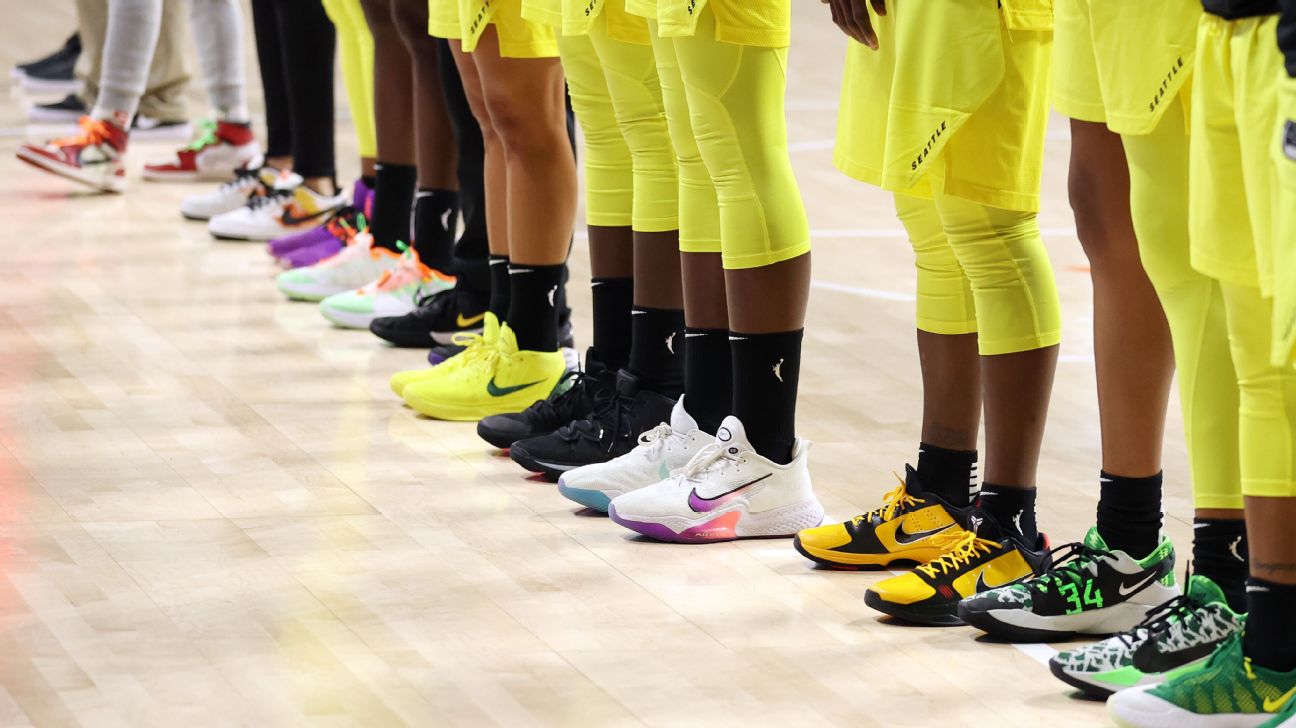 As the WNBA descended upon Bradenton, Florida, for the 2020 season earlier this summer, several faces of the league, including Sue Bird, Diana Taurasi and Breanna Stewart, were looking to showcase their styles in more meaningful ways than ever before. The faces of the league were planning to highlight messages promoting social justice and voter registration not only through a rotation of T-shirts and jerseys but also atop their colorful kicks.


With the regular season wrapped up and the playoffs in full swing, ESPN names the All-Sneaker First and Second Teams from the WNBA's 24th annual campaign, along with a handful of individual awards for the players who made the most of their time in the Wubble.

With Maya Moore on a two-year hiatus from basketball and Asia Durr out for the 2020 season because of medical reasons, Nurse has held it down as the Jordan Brand's lead ambassador in the WNBA. After the league returned in late July, the Liberty guard unveiled vibrant pairs of Air Jordan 34 PEs on a nightly basis before giving the upcoming Air Jordan 35 an on-court WNBA debut at the end of the regular season -- just as she scored her 1,000th career point. -- Aaron Dodson

Although she missed half of her team's regular-season games because of a left knee injury, the blend of hardwood hooping and bench appearances allowed for Bird to flex perhaps the best sneaker rotation of the season. From Off-White Jordans along the sideline to exclusive Kyrie 6 colorways in every game, Sue stayed fresh for yet another season while celebrating the best of Nike's on- and off-court looks. -- Nick DePaula

It's only right that Loyd, whom the late Kobe Bryant dubbed the "Gold Mamba," has extended her mentor's sneaker legacy in the Wubble. Loyd -- the WNBA face of Bryant's Nike signature line -- has primarily laced up both "EYBL" colorways of the Kobe 5 Protro this season, with a mix of six editions of the model. Her most impressive pair was a white, black, green and yellow Kobe 5 PE --made exclusively for her -- that she wore for the Storm's team photo day. Fingers crossed that Loyd's PE makes an on-court appearance in the playoffs. -- Aaron Dodson

Candace Parker, Los Angeles Sparks
One of the few faces of Adidas playing in Orlando, with fellow headliners Chiney Ogwumike and Liz Cambage opting out of the season, the decorated Parker turned back the clock throughout the Sparks' season, breaking out a variety of patent-leather looks of the brand's Pro Model 2G Retro. An icon from the early 2000s that was originally released during Parker's high school days, the sneaker was a status symbol on the summer AAU circuit at the time, with exclusive colorways given to some teams and custom stitching added for the most elite teams.

Parker's player exclusive pairs featured her "Ace" logo along the tongue and a variety of patent shades, such as purple, yellow, pink and mint. She rocked a tribute pair honoring Kobe Bryant's storied Lakers career on what would have been his 42nd birthday and a white, black and gold custom in support of Adidas' "Ready For Change" campaign. -- Nick DePaula

Diana Taurasi, Phoenix Mercury
For more than a decade, the go-to on-court sneaker for Taurasi has come from fellow Nike athlete LeBron James' signature line. It's a trend Taurasi has continued in the Wubble while using her pairs of LeBron 17s as a canvas for social justice statements. Taurasi has worn two powerful pairs of custom 17s: one inscribed with the names of Black women who lost their lives to police brutality and another inspired by Nike's classic Air More Uptempo that replaces the iconic oversized "A-I-R" lettering with "B-L-M" on the upper. -- Aaron Dodson

Originally slated to be the face of Nike's Zoom NXT BB during the 2020 Olympic Games, Breanna Stewart utilized the summer's shifting calendar to break out a handful of colorways of the brand's new high-tech, position-less sneaker during the WNBA season. In addition to Storm-centric colors, Stewie closed out the month of August in a customized pair featuring a series of raised fist emojis in different skin tones alongside a charge to "Go Vote." -- Nick DePaula

When Samuelson signed with Puma a year ago after an impressive run at UConn, the No. 4 overall draft pick was part of a select trio of players headlining Puma's relaunch in the basketball space. Alongside longstanding star Skylar Diggins-Smith, Samuelson and Jackie Young were tasked with highlighting the brand's revitalized Clyde franchise and future models.

"I was really excited to work with Puma because they're really working on growing our game and merging basketball and lifestyle to elevate the women's game," Samuelson said upon signing.

Right away, she emerged as the most colorful of the bunch, wearing nearly every release and mismatching the blue and neon hues of her Dallas Wings unis on a nightly basis in Florida to let the Puma Sky Dreamer and RS Dreamer models stand out. -- Nick DePaula

Sugar Rodgers, Las Vegas Aces
Sugar? Yes, please, with all the sweet kicks! On the court, the Aces guard has shown off an impressive set of LeBron James' signature sneakers, from the China Moon 7s to the Superhero 10 Elites to the Hare Soldier 14s to the What The 17s. Off the court, Rodgers has basically rocked every pair from a sneakerhead's wish list, including the Strangelove and Chunky Dunky Nike SB Dunks, the Melody Ehsani and Solefly Air Jordan 1s and the Off-White Air Jordan 4s. Shout-out to Sug. -- Aaron Dodson

Gabby Williams, Chicago Sky
Gabby Williams didn't wait until Mamba Day on 8/24 to pay a heartfelt sneaker tribute to the "Mambacita." The Chicago forward started the season in a custom pair of the Nike Mamba Focus, featuring a portrait of the late Gianna Bryant done by artist JD the Painter along the left shoe, opposite the Mamba Academy's logo on the right shoe. Williams also teamed up with JD for a custom red, black and green pair of the Nike Mamba Fury adorned with "Black Lives Matter" and "Say Her Name" messages. -- Aaron Dodson

Although Jewell Loyd headlined the newest Kobe 5 Protro colorways throughout the season, Clark served up several looks at some of the more recent beloved Bryant models. From the high, high-top Kobe 9, worn by Bryant just as he was returning from his Achilles tear to player exclusive editions of the Kobe AD, his first post-retirement sneaker, Clark wore loud and lively colorways throughout the season to round out the Storm's impressive sneaker showing. -- Nick DePaula

In recent years, Bird has emerged as one of Nike's featured sneakerheads, receiving player-exclusive colorways of Kyrie Irving's signature line and helping debut some of the brand's upcoming designer collaborations. Nike even launched a "Keep Sue Fresh" campaign last year centered on loading her up with heat. Although she didn't have her extensive Seattle closet stash at her disposal in the bubble, the 19-year vet still packed a punch with her pairs. On top of the rare Jordans and hyped-up Dunk Lows, Bird looked to make a mark with her platform, including adding "VOTE" above her "Just Do It"-themed Kyries. -- Nick DePaula

With a 10-pair set of AJ 34 exclusives for the summer schedule, Nurse showcased the brand's latest game shoe in everything from bold team looks to touching tributes to family members and siblings. There was the black and seafoam edition with orange accents throughout and the seafoam-and-gold pair Nurse calls "Lady Liberty," dedicated to franchise great Teresa Weatherspoon.

The giraffe-textured pair is a nod to her fellow lanky-limbed siblings, and the "Think Pink" pair honored their late grandmother. Nurse also highlighted the key steps of her journey to the W throughout the season, wearing a simple black and gold pair featuring the 905 area code of her Hamilton, Ontario, hometown on the heel, opting for a clean grey, red and navy UConn-themed look and donning a pair honoring the Gold Medal that Canada won at the 2015 Pan-Am Games. -- Nick DePaula

Although Stewie was tasked with headlining Nike's new Zoom BB NXT sneaker for the summer, no colorway spoke more loudly than her custom-painted pair for the opening weekend of the season. Featuring a series of protest signs declaring phrases such as "Time For Change" and "Black Lives Matter," the inner side of the shoe highlighted a raised fist emoji. On the outside of the half-white, half-black pair, "Say Her Name" was boldly featured on the left shoe, and the names of 19 victims of police brutality were inscribed along the right shoe.

"Bigger than ball," she captioned on Instagram. -- Nick DePaula

Among her eight-pair rotation of Puma sneakers for the Wubble, the second-year forward helped debut the new RS Dreamer, the brand's first sneaker designed in tandem with rapper J Cole. Whether it was the multicolor launch edition, the all-red look or the brand's fun and faded midsole collaboration with Super Mario, Samuelson showcased the best of Puma Basketball's upcoming looks throughout the regular season. -- Nick DePaula

When Under Armour's newest trio of WNBA rookies took the floor in Florida, they did so in one of the industry's first women-specific hoops sneakers in years. Created by a trio of women at Under Armour -- designer Jessie Benjamin, product manager Sasha Chaplin and color director Shaneika Warden -- the brand crafted the new Breakthru sneaker with a slimmer heel, more flexible forefoot and other female-framed design insights marking a renewed investment in women's athletics.

"With the way the game continues to evolve [and] the things this next generation of players are doing on the court, we really challenged ourselves to lean in and understand what was most important to them, from performance to fit to look and feel," Chaplin said. -- Nick DePaula
Report a correction or typo
Related topics:
sportsespnchicago skywnbanew york libertylos angeles sparksphoenix mercurydallas wingsseattle stormlas vegas aces
Copyright © 2021 ESPN Internet Ventures. All rights reserved.
More Videos
From CNN Newsource affiliates
TOP STORIES