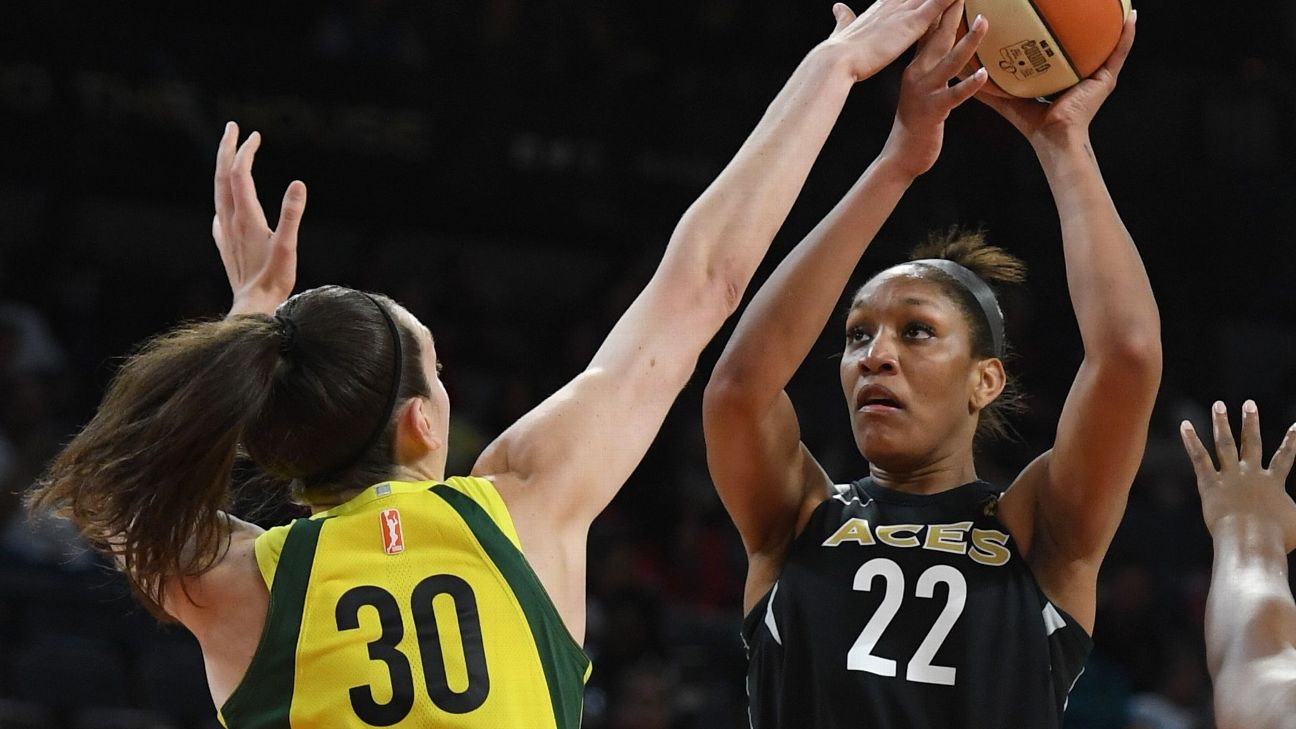 Los Angeles Sparks forward Nneka Ogwumike thought we might see big performances this year in the WNBA that were not just from well-known names.

"This season was a hard choice to decide whether to play," Ogwumike said of players opting to be in the WNBA's bubble in Bradenton, Florida. "But it provided an opportunity for players who otherwise maybe would not have been recognized to truly show their talents."


Several stars are shining brightly, such as the Seattle Storm's Breanna Stewart and the Las Vegas Aces' A'ja Wilson, but so are some less-heralded players. At the midway point of the 22-game regular season, we rank players on how they've performed so far in the bubble.

It's hard to find anything that Stewart and the Storm are not doing well. Seattle is 11-1 for the first time in franchise history and on a nine-game winning streak. Stewart is shooting 52% overall from the field and 46.3% from 3-point range. She is also good at finding her teammates when defenses try to blanket her, so her passing can harm opponents, too.

The centerpiece of the Aces, she responds positively to challenges from coach Bill Laimbeer. Her coach at South Carolina, Dawn Staley, says that Wilson's midrange game has improved, and that she is playing with a lot of confidence. Wilson has struggled some from the field in three of the past for games, but she will make some adjustments.

After an 0-5 start, things began to click for the Sun, who have won five of seven games since. Bonner attributes Connecticut's turnaround to new players on the team this season, including her, needing a little time to get used to one another. The Sun have done that, and Bonner has become their top scorer and clutch player.

Her rebounding average is the best it has been since she finished at 10.1 in 2015. Parker says the bubble has impacted her positively because not travelling takes away that toll on her body. She seems to be truly enjoying this season and finds ways to impact games whether she is scoring a lot or not. On Wednesday, she had her sixth double-double of the season.

The Mercury have had their ups and downs, but Griner for the most part has provided consistency. She still wants her rebounding numbers to be better, but she is leading the team in minutes played and is averaging a career high in assists. Of course, the Mercury want Griner to do a lot more shooting than passing. Sunday, she had a season-high 29 points.

The league's leading scorer, Ogunbowale had one of the best games of her young career Sunday with 33 points in a victory against Phoenix. Her field goal percentage has gone up to 42.3 from 38.8 last year. Her free throw percentage has dropped from her rookie season, although she's still at 73.9%.

She has built on her 2019 Rookie of the Year season and taken over a leadership role for the Lynx despite her youth. With Sylvia Fowles out injured, the Lynx needed someone else to have a bigger impact on the boards, and Collier did that with three consecutive double-digit rebound games.

The Aces signed her as a free agent to be a talented complementary player whose experience would help the team. She has been all that and more, and will be a key factor in how far the Aces go this season. She's shooting 55.8% from the field, which is by far a career high. Her best final shooting percentage for any previous season was 47.6% as a rookie in 2009.

This might be too low for the player many consider the GOAT. But we are taking into account the back injury that kept Taurasi out for three games. Will it impede her any more the rest of the way? Or will she be able to put together more stretches like the four-game run she had this season when she averaged 20.5 points? She has totaled 33 points, 15 rebounds and nine assists in two games since returning.

The WNBA's current assist queen, she has had five games this season with double-digit dimes. Her 15-point, 15-assist effort in a victory over Las Vegas on Tuesday is just the second time that double-double has happened in the WNBA (the first was also by Vandersloot). She is the perfect distributor for this team but is also averaging close to her career high in scoring, too.

It was hard to know where to rank Fowles because she is currently out because of a calf injury and it is uncertain when she will be back. But when in the lineup for the Lynx, Fowles has been her usual dominant self. She is shooting 60.9% from the field and continues to be one of the league's best interior defenders.

There are so many ways she impacts games, and that includes on the defensive end where her strength, versatility and hustle have been key to the Sun's turnaround from a rough start. With Jonquel Jones sitting out this season, the other Connecticut players have had to pick up the slack in rebounding, and Thomas currently has her career-high average on the boards.

Dealing with a hamstring issue, she has missed only one game, but she is grabbing 2.4 fewer boards than her previous lowest average in her career: 6.8 in 2018. The Sparks are averaging the fewest rebounds in the league at 30.6. Yet their team field goal percentage (48.0) is third best, and Ogwumike is excelling there at 59.8.

In her first year with Phoenix, she has been what the franchise hoped for: a good floor general who can also be a high-level scorer and shoot well from long range (40%). The Mercury have struggled with consistency thus far, although injuries to Taurasi and Bria Hartley have contributed to that. Diggins-Smith for the most part has been a steadying presence.

So far, she is having the best season of her three-year WNBA career and is now third in the league in scoring. Her 32 3-pointers are the most in the league thus far, and she is shooting 42.7% from beyond the arc. As the Fever's young inside game develops, Mitchell's ability to stretch the defense will help.

Sky coach James Wade said he always thought that Copper would blossom with more playing time, and she has. She has career-best numbers in scoring, rebounding and field goal percentage. She's currently leading Chicago in scoring, and in a season in which Diamond DeShields has been slowed by injury, Copper really has been key.

She missed five games because of a knee injury, and Jordin Canada is very good at point guard when Bird is not on the floor. But Bird still brings the experience and confidence that lifts everyone. And on a Storm team that is making a case as potentially the best 3-point shooting team in league history, she is shooting a career-best 54.8% (17 of 31) from beyond the arc.

The move to Phoenix has been good for Hartley, who spent her first three seasons with Washington and the next three with New York. She has come off the bench for the Mercury and been a big boost, with career-high averages in scoring and assists. She missed two games because of a foot injury but has scored 24 or more points in three games.

What a second-round gem Dangerfield is turning out to be; the No. 16 pick in April's WNBA draft has become the favorite for Rookie of the Year. Injuries to other players like Sabrina Ionescu and Chennedy Carter have impacted this, but Dangerfield is playing well enough to be leading the conversation regardless. She added another big game Wednesday with 21 points and six assists.

She suffered an ankle injury about three minutes into the Dream's loss on Aug. 10; it is hoped she will return next week. Before Carter was hurt, she had made a case as Rookie of the Year front-runner with some big scoring performances, including 35 points against Seattle. Like Ogunbowale, Carter can create shots out of nowhere and be very challenging to guard.

Her story this season is similar to Sky teammate Kahleah Copper: She has made the most of more playing time, and that has been essential to Chicago's success. Her scoring, rebounding, field goal and free throw percentages are all career bests, and also like Copper, she is confident being a go-to player now in the clutch.

It has been a tough season again for the Dream, but Laney has been a bright spot. Waived by Indiana just before the season started, she was picked up by Atlanta and has done far more than expected. She's having her best season with increased playing time. She added the 3-pointer to her repertoire last season, and had a career-high 35 points Wednesday.

With so many players from last year's WNBA title team not playing this season, it was clear -- despite Washington's good start -- that 2020 would be a challenge for the Mystics. It has been, but Hines-Allen has made the most of a bigger opportunity to play after averaging 3.8 and 2.3 points her first two seasons.

Clark doesn't have flashy numbers but stats don't tell all she does for the Storm as a glue player. She worked her way into the starting lineup in 2014 and has been there since. She is one of the league's toughest and most versatile defenders, and when the Storm need more scoring from her -- such as when Bird was out -- she can deliver that, too.
Report a correction or typo
Related topics:
sportsespnchicago skywnbanew york libertydallas wingsseattle stormlas vegas acesatlanta dreamindiana feverconnecticut sunespnwlos angeles sparksminnesota lynxphoenix mercurydailywashington mystics
Copyright © 2021 ESPN Internet Ventures. All rights reserved.
More Videos
From CNN Newsource affiliates
TOP STORIES