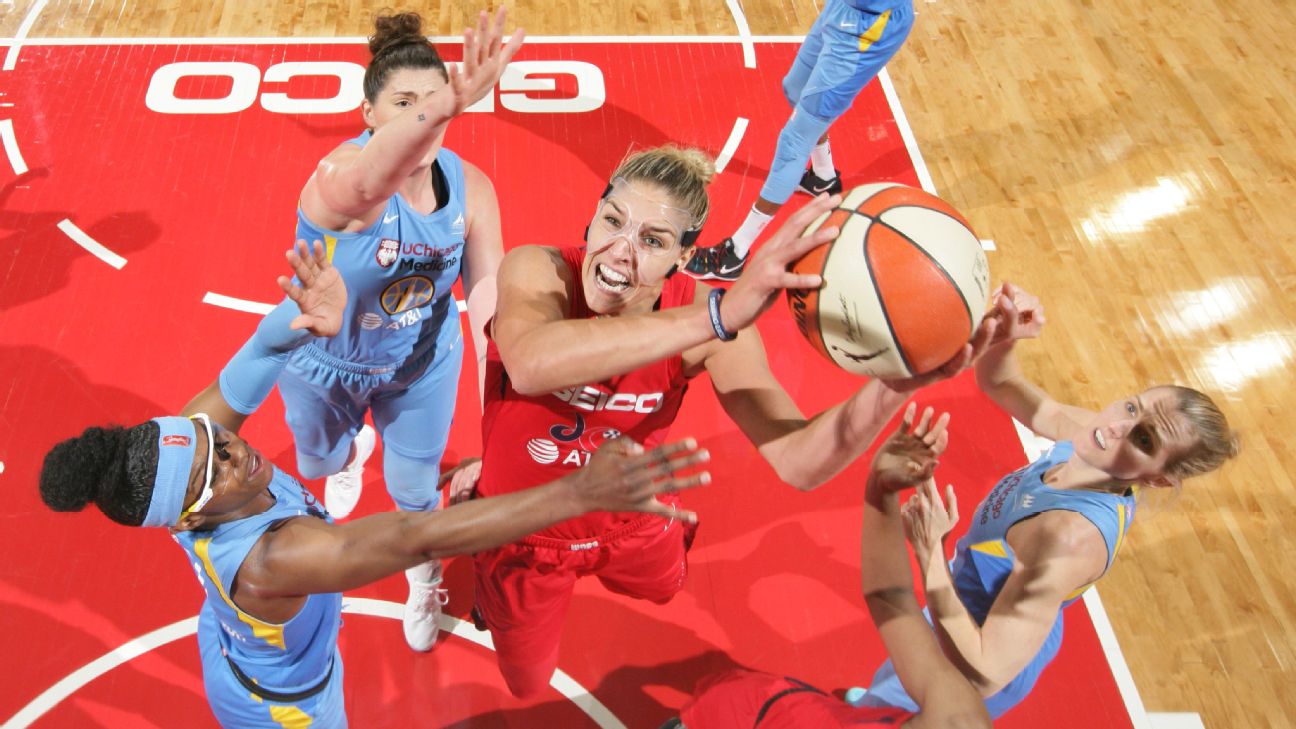 The WNBA playoffs continue Tuesday (ESPN2, 6:30 p.m. ET) as the top four seeds clash in the best-of-five semifinals. Can the Las Vegas Aces stop MVP front-runner Elena Delle Donne and the top-seeded Washington Mystics? Can the Los Angeles Sparks steal a game from the Connecticut Sun, who lost only two games at home this season? What are the X factors in both series?

How should the Aces try to defend Elena Delle Donne?

Voepel: The Aces will need to walk that line between being physical with Delle Donne and not sending her to the free throw line, where she's shooting 97.4 percent (114 of 117) this summer. The Sparks did the best job this season defending Delle Donne, holding her to nine points on 4-of-12 shooting on June 18. But the Mystics still won that game.

One of the biggest problems in facing Delle Donne is there is no place on the floor she's uncomfortable shooting. You can't force her away from her dominant hand because she's so good with both. She's going to hurt you driving to the basket, pulling up for jump shots, coming off screens, and scoring on putbacks -- name a way to score, and she's good at it. Ultimately, you try to deny her the ball, which sounds easier than it is because she's so good at handling the ball.

Pelton: I wouldn't be surprised if Sixth Woman award-winner Dearica Hamby presents Las Vegas' best option, which would create a dilemma for Aces coach Bill Laimbeer: Does he take one of his frontcourt stars (Liz Cambage and A'ja Wilson) off the court or try to play all three posts together, which would hamper spacing? Whatever the choice, I think Las Vegas has to play Delle Donne 1-on-1 and stay home on the Mystics' elite 3-point shooters.

Hurd: I think the Aces defend her by attempting to limit the production of everyone else. Make it harder for Natasha Cloud to kick the ball out in penetration. Eliminate second-chance opportunities by being efficient on the boards (the Aces average a league-leading 38.8 RPG). Try to condense Washington's spacing. And do your best to keep the Mystics off the perimeter. Easier said than done.

Las Vegas' lone win over Washington occurred when Delle Donne was out with her nasal fracture. What must the Aces do to beat the Mystics with her?

Maine: Pray? Eat a hearty breakfast? Hope she gets in foul trouble? It will be a tough task for the Aces to beat a Delle Donne-led Mystics, but it's not impossible. Las Vegas has been the best defensive team in the WNBA this season (with a league-leading 95.0 defensive rating), so the Aces will need to do what they do best and find a way to shut down the Mystics' versatile offense.

Of course, the Mystics have other scoring options, and the best offensive rating (112.7) in the league -- but off nights happen. And if all else fails, just give Hamby the ball and tell her time is expiring.

Hurd: Get Wilson and Cambage touches early because their success makes the offense go. In the first quarter against Chicago on Sunday, Cambage and Wilson went scoreless from the field while only attempting a combined five field goals. They finished the first half a combined 4-for-13, and Las Vegas trailed 51-45. With a Washington offense that can put up points in a hurry, the Aces could find themselves in a first-half hole they might not be able to recover from if that tandem can't get going.

Pelton: Few teams have been able to beat Washington with a healthy Delle Donne. The Mystics are 17-2 since the All-Star break, after all. Las Vegas has to beat up on a smaller Washington frontcourt on the glass, slowing down the game and creating second chances. The Aces must limit the Mystics' open looks from beyond the arc -- something Laimbeer doesn't generally prioritize -- and hope Kristi Toliver struggles if she returns.

Voepel: Delle Donne is going to get her points. But don't forget 6-4 Mystics forward Emma Meesseman (55.2 percent) has an even higher shooting percentage than Delle Donne's 51.5 percent. Meesseman gives the Mystics another dynamic weapon -- and that's one more big body that can score from all over whom the Aces have to defend.

That said, the Aces need to have confidence in their offense, too. Wilson didn't have a great game offensively against Chicago and at times seemed a bit uncharacteristically hesitant in what shots she took. Las Vegas will need Wilson and Cambage on top of their games offensively, and they also need to win the rebounding battle.

Both the Sun and Sparks have great frontcourts. So what's Connecticut's answer for L.A. guard Chelsea Gray?

Maine: On the plus side for the Sun, they held Chelsea Gray to just 12 points in their last meeting in August. On the not-so-great side, Connecticut lost the game, and three other Los Angeles players scored more points. Gray was the star in the Sparks' win over the Storm on Sunday with 21 points and eight assists, and she's more than capable of taking over a game when her team needs her to. Her former Duke teammate Jasmine Thomas is the Sun's equivalent. Averaging more than 11 points and five assists (and 1.4 steals) a game, she's the team's emotional leader and on-court general. Much like Gray can turn a game around for the Sparks, so can Thomas.

Pelton: The Sun's starting backcourt of Jasmine Thomas and Courtney Williams gives up size to the 5-11 Gray, who will probably get opportunities to run the offense through the post in addition to bombing away from the perimeter. Connecticut will want to make Gray work defensively and try to force her into turnovers -- she averaged 4.0 against the Sun during the regular season.

Voepel: Gray was the glue for the Sparks in the regular season, leading them in minutes played (32.6) and assists (5.9), and following leader Nneka Ogwumike in scoring (14.5). Gray's court vision is spectacular, her passing has a flare like the great Ticha Penicheiro's did, and her pull-up jump shot has been the dagger in the heart of many an opponent.

But as Kevin pointed out, sometimes turnovers can hurt Gray and the Sparks. Sun coach Curt Miller has been proud of how his team has improved on defense this season, and they'll need to channel that toward creating problems for Gray. Because if she's controlling the game, the Sun will be in trouble.

What or who is the other X factor for the Sparks against the Sun?

Pelton: Getting offensive production from wings Tierra Ruffin-Pratt and Alana Beard. L.A. coach Derek Fisher will want to use them to quiet Williams, and that becomes much easier when Ruffin-Pratt and Beard are providing something on offense -- particularly 3s from Ruffin-Pratt, who shot a career-best 34 percent from beyond the arc during the regular season.

Voepel: Candace Parker played in just 22 of the 34 games in the regular season due to injuries, and, yes, she's now 33 years old. But Parker has a long history of rising to the occasion when the stakes are at their highest. Plus, she impacts the game in so many ways. Sunday against Seattle, she had 11 points, 10 rebounds and six assists. In her past five games, she's shooting 50 percent (30 of 60) from the field.

Maine: Nneka Ogwumike. In the three meetings between the two teams this season, she averaged 18 points and 11 rebounds. Obviously she's one of the best players in the league and a former MVP for a reason, but expect her to bring her A-game in this series and be a factor every time she touches the ball.

How much does the storyline of Chiney Ogwumike facing her old team impact this semifinal series?

Voepel: The Sun have some of the best chemistry in the league, along with the Mystics. It's part of the reason they are the top two teams. Connecticut adjusted to playing without Chiney Ogwumike in 2015 and 2017, when she was out with injuries. And while they did well with her last season, they had an even better record this year.

Losing someone of her talent level isn't easy, but led by Jonquel Jones (14.6 PPG, 9.7 RPG), the Sun have been good all season, especially at home. Plus, animosity just isn't really a factor in this situation, even though the Sun essentially felt at least somewhat forced into trading Ogwumike to Los Angeles. This is still Chiney we're talking about. Holding a grudge against her would be like being mad at a ray of sunshine. It's pretty hard to do.

Maine: For fans and members of the media, this is a tantalizing storyline. But Ogwumike is such a pro, as are her former teammates, I don't think it will have too much of an impact on anything basketball-wise once the ball is tipped on Tuesday night. If anything, it just means she'll have to answer a few questions about it during her media availability, but mostly she'll just have the best recommendations for her Sparks' teammates about where to eat at Mohegan Sun.

Pelton: I think it's probably more of a pre-series talking point than something that will matter on the court. Bringing a 2018 All-Star off the bench will be a big boost for the Sparks, who were plus-29 in Ogwumike's 17 minutes of action on Sunday. But that would be true against any opponent, not just Connecticut.

Hurd: I'm not sure that storyline impacts the semifinal series, but it also might not be a coincidence that Chiney has played extremely well against her old team all season. In their three regular-season games, in which Ogwumike has averaged 24.6 minutes played, she's also averaging 14.6 points. Outside of the Liberty, that's her highest points per game average against a team in the regular season.

Do the Mystics and Sun need to worry about being rusty having not played since Sept. 8?

Pelton: The evidence generally suggests that the value of rest is stronger than the downside of rust in the playoffs, and the WNBA's double-byes seem to fit into that. Since the league went to the current playoff format in 2016, home teams are 5-1 in Game 1 of the semifinals, with an average margin of plus-12.0 PPG -- even better than their plus-9.3 average margin in sweeping six Game 2s of the semifinals.

Voepel: Let's go back to the chemistry thing. It was so obvious that the Mystics and the Sun clicked this year. Even in losses, these teams didn't fragment into five people on court doing their own thing, which their semifinal opponents, the Aces and the Sparks, sometimes did. The time off isn't likely to have created any rust at all; it has just given the top two teams more of chance to rest and prepare. Plus, they don't have to take cross-country flights the day before Game 1.

Maine: I'm not sure if rust is much of a concern, but I think the Mystics and the Sun should be slightly worried about the momentum of the teams they're facing. Winning an elimination game is a confidence-builder, and especially the types of games the Aces and Sparks won on Sunday. However, even if rust or momentum is a factor in Game 1, neither should be too consequential in a best-of-five series overall.
Report a correction or typo
Related topics:
sportsespnwnbalos angeles sparkswashington mysticslas vegas acesespnw sportsconnecticut sunespnw
Copyright © 2020 ESPN Internet Ventures. All rights reserved.
More Videos
From CNN Newsource affiliates
TOP STORIES