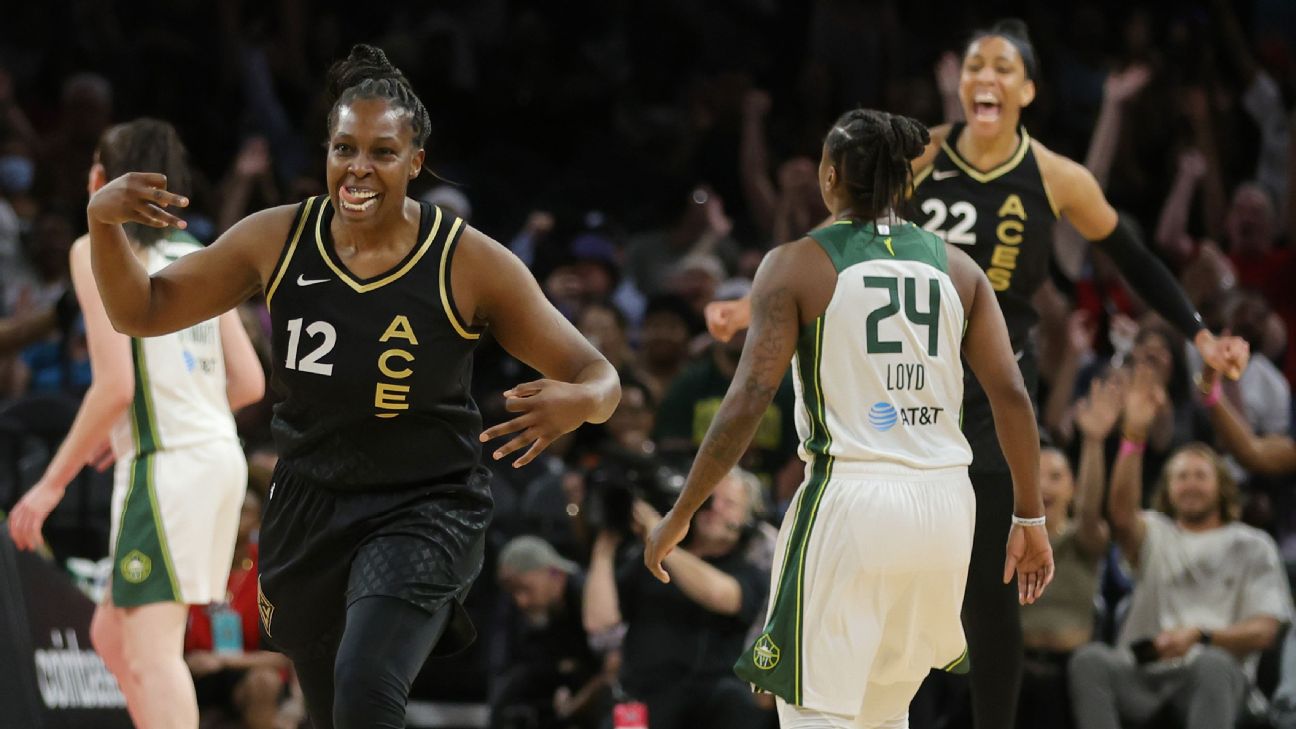 If ESPN's preseason rankings are determined a fair amount by educated guesswork, the Week 1 WNBA Power Rankings are based on a very small sample size. Still, getting off to a strong start is a good sign, and three teams are 2-0 after the WNBA's 2022 opening weekend. For the Los Angeles Sparks and Washington Mystics, that's especially heartening after both missed the playoffs last season. For the Las Vegas Aces, who had the second-best record in 2021 but were upset in the semifinals, it's a signal that things are clicking under new coach Becky Hammon.

The Sparks, because of expected NBA playoff games at Crypto.com Arena in Los Angeles that aren't actually happening, have 10 of their first 14 games away from home. Travel is not a favorite topic in the WNBA, but time on the road can serve as a bonding experience. After the Sparks' opening wins at Chicago and Indiana, that's a good way for them to look at the time away from L.A.


"I'm having a lot of fun with the girls; we're growing and learning on the road right now," said center Liz Cambage, in her first season with the Sparks. "It's not easy. We're taking the positive out of it. I love this group so much. I love working with them."

As usual for early-season games in the WNBA, there are some important players out because they're still playing overseas or haven't returned yet. Despite that, there were some entertaining opening-weekend battles and some big names such asElena Delle Donne and Angel McCoughtry, who missed most or all of last year due to injuries, back in action.

Here are the Week 1 Power Rankings as the season gets underway.

Hammon said after the opener she might need to get on the Aces about their defense, but they're going to be a reliably strong offensive team. That was the case in their two victories: 106-88 at Phoenix and 85-74 over visiting Seattle. Las Vegas shot 58.2% against the defense-challenged Mercury and 44.8% against a stronger Storm squad. In both games, all five Aces starters scored in double figures. Rebounding also has been impressive so far; Dearica Hamby had 19 boards against the Storm, while A'ja Wilson tallied 15. Those two had a combined 18 rebounds against the Mercury.

The Aces travel east this week, with Tuesday's contest against the Mystics looking like an early-season must-see game.

This week: at Washington (Tuesday), at Atlanta (Friday)

The Sparks made the most of getting a second life in their opener at Chicago, as guard Jordin Canada -- in her first game with Los Angeles -- hit three free throws with 1.5 seconds left to force overtime. They went on to win 98-91 on Friday. Then they made the short trip to Indiana for an 87-77 triumph on Sunday over the Fever. So far, Los Angeles has been led in scoring by two of their new additions this season: Canada had 21 points versus the Sky, and Cambage posted 22 against the Fever. Canada, who spent her first four seasons with Seattle, also led the Sparks in assists in both games, with eight and six.

Guards Chennedy Carter and Lexie Brown -- two other players new to L.A. -- combined for 24 points at Chicago and 17 at Indiana. Speaking of combos, sister post players Nneka Ogwumike and Chiney Ogwumike had 46 points and 30 rebounds on opening weekend. And one of the league's top defenders, guard Brittney Sykes, had nine steals over the two games. In all, a promising first weekend.

This week: at Atlanta (Wednesday), at Connecticut (Saturday)

On Friday, Elena Delle Donne played in her first game since August, leading the way with 21 points and nine rebounds in a win over Indiana. But she didn't travel to Minnesota for Sunday's game as originally planned; load management following Delle Donne's recovery from multiple back surgeries will be part of the Mystics' season. Natasha Cloud looks ready to pick up any slack. She had a combined 36 points, 10 rebounds and 12 assists in the two wins.

While the Mystics are used to seeing Cloud and fellow guard Ariel Atkins (a combined 35 points, six rebounds, eight assists) come up big, they had to be pleased with the debut of No. 3 draft pick Shakira Austin. The center had the first double-double of her WNBA career (13 points, 10 rebounds) versus the Lynx. Delle Donne is expected back in action this week, with two games at home.

This week: vs. Las Vegas (Tuesday), vs. Dallas (Friday)

So far, things have looked as expected: Breanna Stewart leading the way in scoring and rebounding for the Storm, and Sue Bird leading in assists. Seattle was very strong in its 97-74 opening win over Minnesota, but the Storm were outmatched offensively and on the boards in falling at Las Vegas. The return of center Mercedes Russell (out with a non-basketball-related injury) will help, as will finding a consistent third scorer behind Stewart and Jewell Loyd. This week the Storm have two matchups against longtime rival Phoenix, which means there will be a lot more speculation about veterans Bird and Diana Taurasi and how many matchups they might have left.

This week: at Phoenix (Wednesday), vs. Phoenix (Saturday)

Liberty fans have been waiting for a fully healthy Sabrina Ionescu since she suffered a severe ankle injury that limited her rookie season to three games in 2020. They might be able to see that this year. Ionescu looked like her old Oregon Ducks self in New York's opening 81-79 win over preseason WNBA favorite Connecticut on Saturday, as she registered 25 points and six assists.

The Liberty have three games this coming week, and they played just eight players against the Sun, one of them being guard AD Durr, back in action after missing the past two seasons due to the effects of COVID-19. So we'll see New York's depth tested early. But knocking off the Sun to get things going was a boost for New York and new coach Sandy Brondello.

This week: at Chicago (Wednesday), vs. Indiana (Friday), vs. Dallas (Sunday)

The external expectations for the Dream aren't high this season, but new coach Tanisha Wright and her team aren't worried about that. The Dream had a strong defensive effort in winning at Dallas in their opener, holding the Wings to 24.3% (17-of-70) shooting. They also outrebounded Dallas 47-39. No. 1 pick Rhyne Howard had 16 points, four assists and four blocked shots in her WNBA debut. The Dream will meet the Sparks and the Aces this week, which will be tough tests, but getting an opening win on the road was important for the new-look Dream.

This week: vs. Los Angeles (Wednesday), vs. Las Vegas (Friday), at Indiana (Sunday)

The Sun didn't play poorly in their first game, with all five starters scoring in double figures in a loss at New York. But they allowed 10 3-pointers while hitting just four themselves. Two key players were missing, as forward/guard DeWanna Bonner is still playing overseas, and guard Courtney Williams is suspended by the league for the season's first two games due to an altercation she was in last year while with Atlanta. The best news for Connecticut from its first game was forward Alyssa Thomas, who had 25 points, seven rebounds and four steals after missing most of last season with an Achilles tendon injury.

This week: vs. Los Angeles (Saturday)

It was an irritating way to start the season for the defending champion Sky. They looked like they had their opener in hand versus Los Angeles, but a late foul on Jordin Canada -- a call Chicago strongly disagreed with -- and her subsequent free throws sent the game into overtime, where the Sparks prevailed 98-91. The call went against guard Dana Evans, who otherwise had a strong opener with 24 points, five assists and four steals. Forward Emma Meesseman, who spent her first seven seasons with Washington, had 12 points, eight rebounds and five assists in her Sky debut. Candace Parker started her second season in Chicago with 21 points, six rebounds and six assists. And Chicago shot 51.4% from the field. Ultimately, the Sky's 25 turnovers hurt the most.

This week: vs. New York (Wednesday), at Minnesota (Saturday)

Phoenix looked compromised defensively in its opening 106-88 loss to Las Vegas, but that's understandable. With center Brittney Griner detained in Russia and out indefinitely, Phoenix will rely even more on forward Brianna Turner. But Turner and guard Diamond DeShields missed the Mercury's first game because of overseas commitments, and the Aces took advantage, shooting 58.2% from the field. Veteran center Tina Charles and guard Diana Taurasi were a combined 8-of-27 from the field, which put more of the load on guard Skylar Diggins-Smith, who had 25 points. This week brings back-to-back matchups with longtime rival Seattle, and Phoenix hopes to get new coach Vanessa Nygaard in the win column.

This week: vs. Seattle (Wednesday), at Seattle (Saturday)

The Lynx's offensive production is the biggest concern as the season begins, as they are missing guard Kayla McBride (playing overseas) and forwards Damiris Dantas (foot injury) and Napheesa Collier (pregnancy). The Lynx shot 39.2% from the field in their 97-74 loss at Seattle on Friday and 34.8% in falling 78-66 against Washington on Sunday. It puts a lot of pressure on Minnesota's defense, and the Lynx could take their lumps for the early part of the season.

This week: at Indiana (Tuesday), vs. Chicago (Saturday)

Two players who should have a big impact for Dallas -- forward Satou Sabally and center Teaira McCowan--are still overseas. That contributed to the Wings shooting just 24.3% in their season-opening 66-59 loss to visiting Atlanta. Guard Marina Mabrey, who had 20 points and made 8 of 16 shots, was the only Dallas player who really seemed "on" in Saturday's game. It was a disappointing 2022 beginning at home for Dallas, which now travels east this week to face two teams that have started well.

This week: at Washington (Friday), at New York (Sunday)

The Fever are last in the Power Rankings as they opened with two losses, but they saw some positive signs. The No. 2 draft pick, forward NaLyssa Smith, had a combined 26 points and 22 rebounds against Washington and Los Angeles. And guard Destanni Henderson, who slipped to the second round as the No. 20 pick, looked like the spark plug the Fever need, as she had 19 points and three assists against the Sparks. The Fever's season is going to be about the performance and growth of young players like Smith and Henderson. 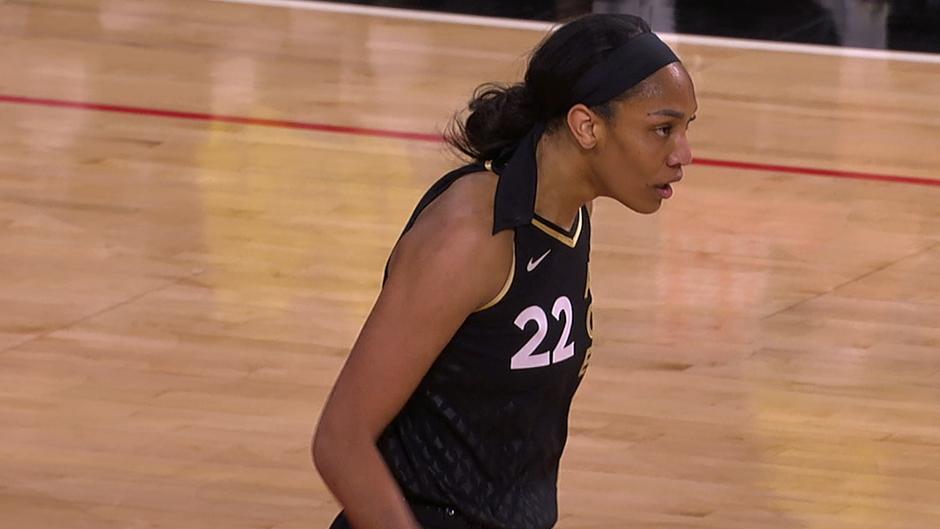 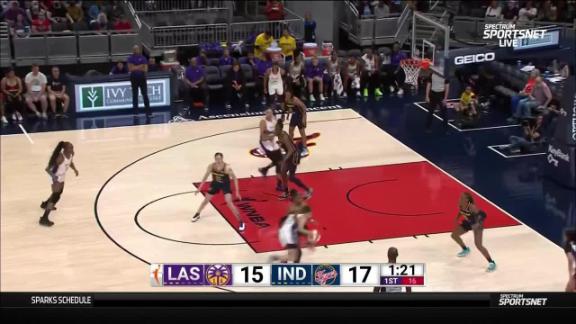 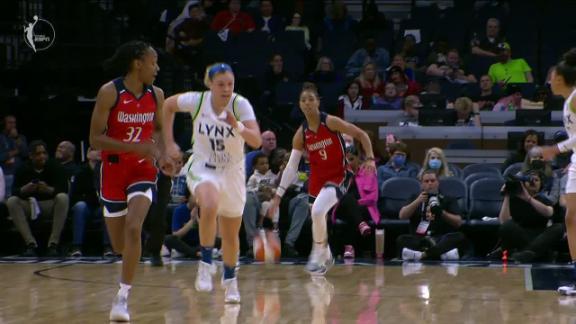 Natasha Cloud sends full-court dime for a Mystics and-1
Shatori Walker-Kimbrough gets an and-1 basket after Natasha Cloud's long pass. 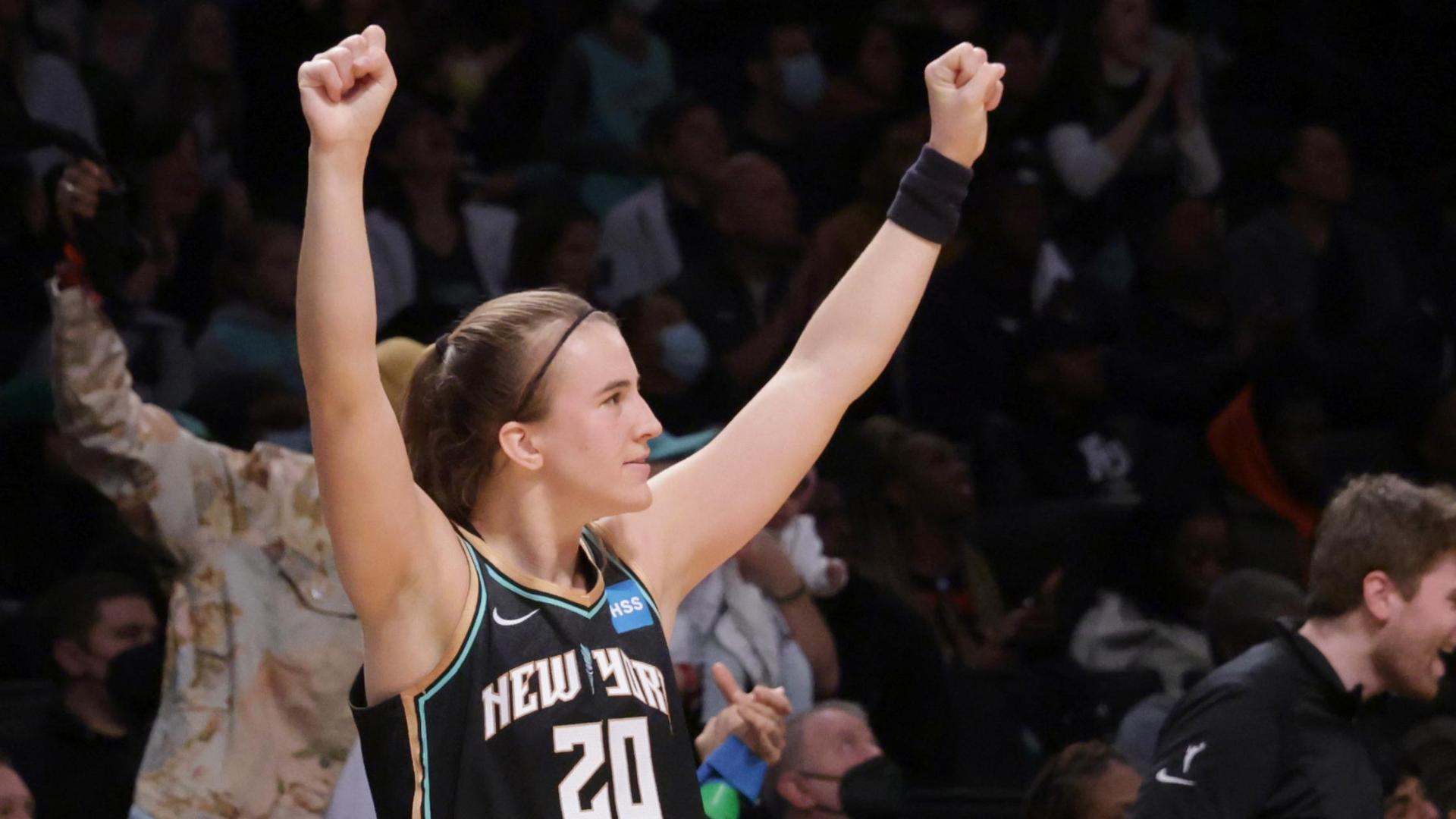 Ionescu pulls up and splashes a 3 from deep
Sabrina Ionescu shows off the range with a deep 3-pointer for the Liberty. 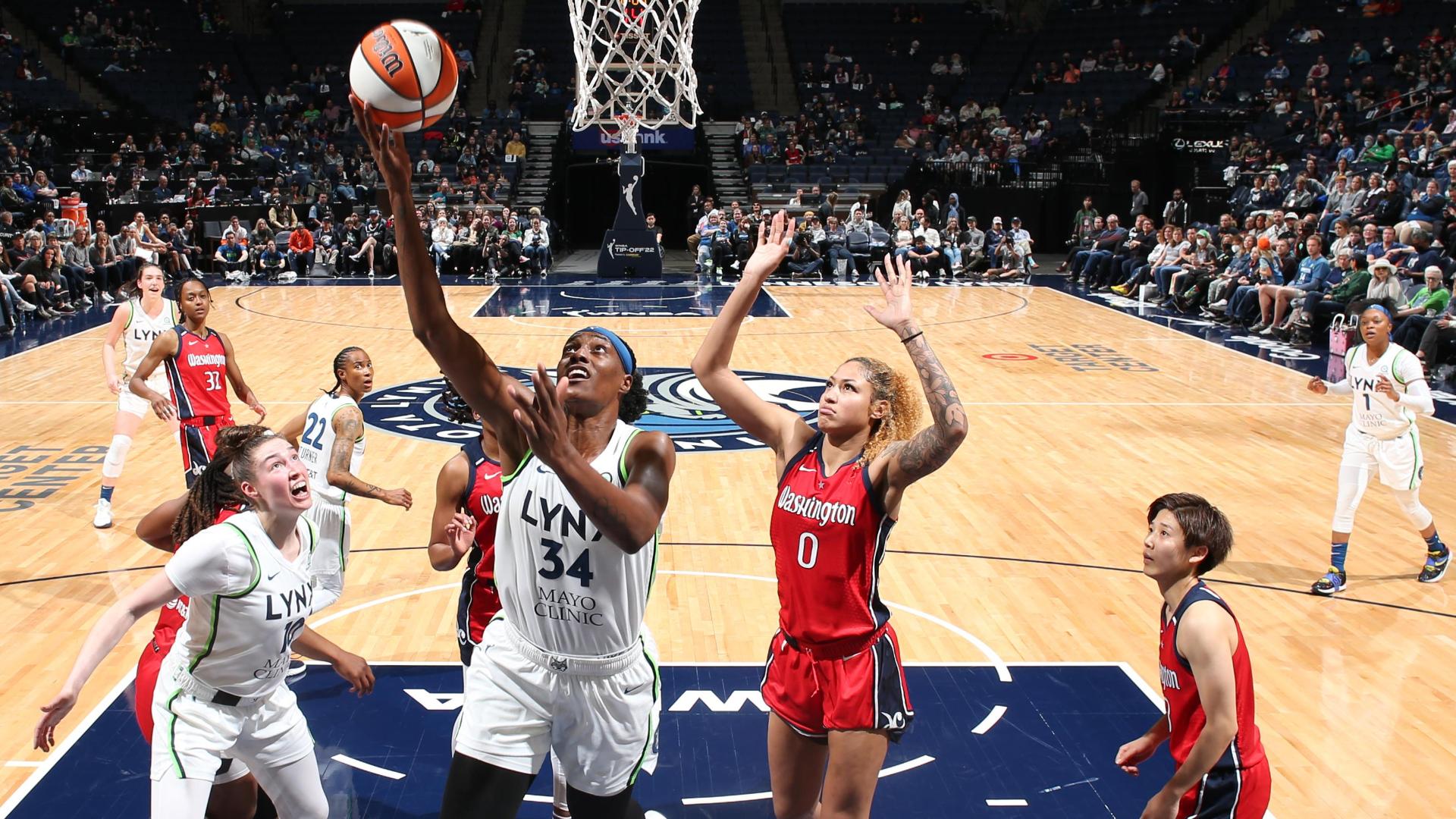