WNBA Power Rankings: Keys for each team in the second half of the season 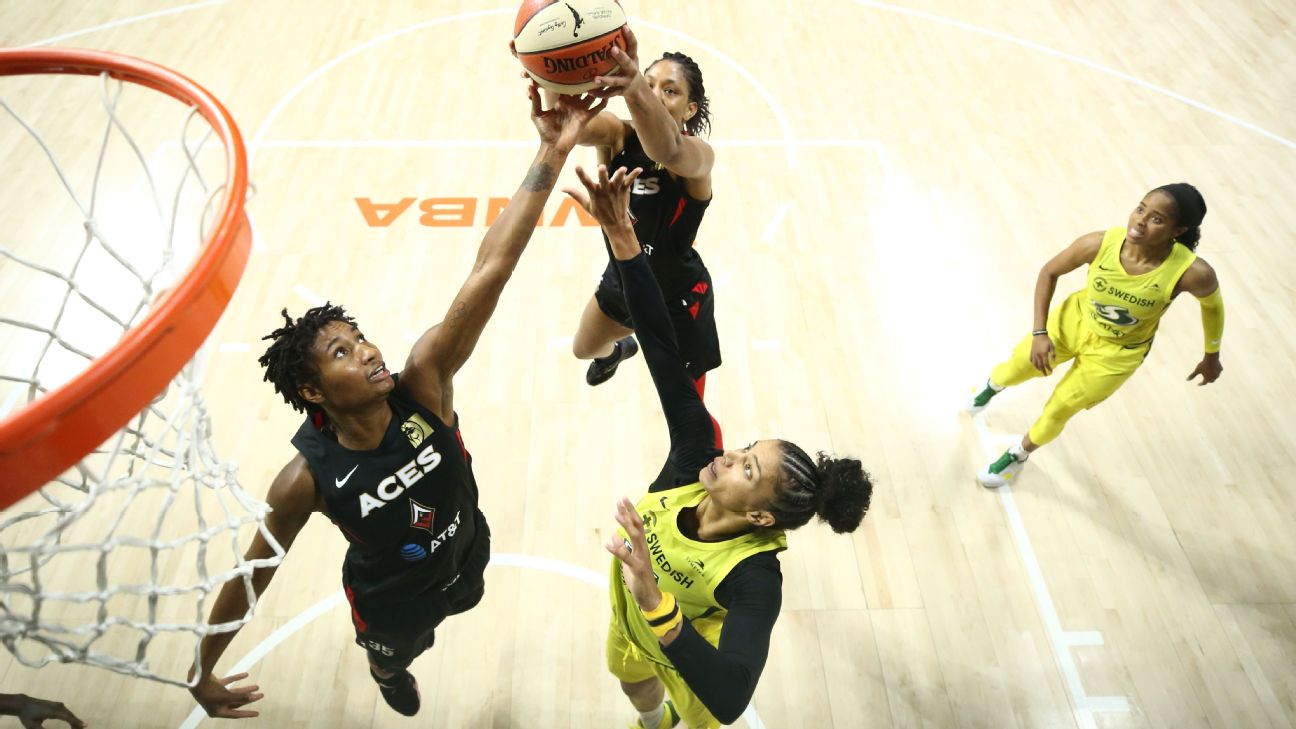 For the first time this season, there's a change at the top of the WNBA Power Rankings. The Seattle Storm's back-to-back losses opened the door, and both the Las Vegas Aces and Chicago Sky were ready to step in.

We went with the Aces, led by MVP candidate A'ja Wilson. Las Vegas lost an 84-82 nail-biter Tuesday to Chicago. But it's the Aces' only loss this month; they're 9-1 in August.


Just past the halfway point of the WNBA's 22-game season, what will each team need most down the stretch to finish as strong as possible?

The 82-74 victory Saturday over Seattle was big. The Aces held the Storm to 37.3% shooting from the field. Coach Bill Laimbeer praised his team's defense for most of the game, pointing out the energy in particular of Angel McCoughtry, Danielle Robinson, Dearica Hamby and Jackie Young.

But Laimbeer and Wilson were concerned about Las Vegas getting outscored 22-13 in the fourth quarter and the game getting close near the end. Wilson said she thinks closing out quarters is a key to the rest of the season for the Aces.

"I think that's something we need to get a better handle on," said Wilson, who had 23 points and 14 rebounds vs. Seattle. "Sometimes we let them get back in. It sometimes can bite you."

The Sparks have won seven games in a row, the longest current streak in the WNBA. Admittedly, the last two were close calls: They went to overtime to beat Atlanta 93-85 on Friday and rallied in the fourth quarter to defeat Dallas 84-81 Sunday.

Coach Derek Fisher has full faith in his team's talent, led by Candace Parker. She had her seventh double-double of the season Sunday (22 points, 14 rebounds, six assists), and leads the team in scoring (14.0) and rebounding (9.8). Her perfectly timed move and basket at the buzzer vs. the Dream sent the game to overtime.

What Fisher most wants to see the rest of the season is the Sparks giving all-out effort.

"We're continuing to connect with how hard you have to work to be great, and not just relying on the exceptional talent that we have," he said. "It's hard to describe how far you have to dig down inside of yourself to bring out the best competitiveness and mental and physical toughness that you have."

Are the Storm still the favorite to win the championship this season? Yes, but losing to Indiana and Las Vegas this past week has to be concerning. Laimbeer said the Storm looked weary, and they didn't have point guard Sue Bird (knee) in either of the losses. Having Bird healthy is key, as is running the offense more smoothly when she's not on the floor, getting more out of their bench and dealing better with physical play.

"We had a hard time with their physicality," coach Gary Kloppenburg said of the Aces. "They kind of disrupted us offensively. We haven't shot the ball well from the 3-point line in the last couple games, so that's a major factor for us."

Breanna Stewart, who had 29 points and 18 rebounds vs. Las Vegas, said it's also good that Seattle gets rematches against the Fever (ESPN2, 10 p.m. ET Tuesday) and the Aces (10 p.m. ET, Thursday) this week. It will be a chance right away to try to fix what went wrong in both those games.

The Sky could be -- maybe should be? -- higher in these rankings after going 3-0 last week, including the win over Las Vegas. They also beat the Aces in the season opener in July. But perhaps Chicago doesn't mind staying in a slight underdog role just a bit longer.


With Diamond DeShields dealing with injury all this season, the Sky have found different people to step forward. Kahleah Copper, a candidate for the WNBA's Most Improved Player award, leads the Sky at 15.1 PPG.

Chicago this week plays two of the teams it just beat, New York and Indiana, and then has a rematch with Seattle on Saturday (ABC, 1 p.m. ET). Chicago lost 89-71 to the Storm on Aug. 10, but the Sky have become a stronger team since.

Courtney Vandersloot, who is averaging 13.4 points and a league-high 8.7 assists, said the most important thing the Sky have to do is continue their steady improvement.

"Things are going well for us," she said, "but we need to lock in and continue to get better every game."

With center Sylvia Fowles out indefinitely with a calf injury, it's no surprise where the Lynx are hurting. Fowles is the WNBA's all-time leading rebounder and a three-time defensive player of the year. Those are two areas that cost Minnesota in its 78-75 loss to Atlanta on Sunday, and have to be points of emphasis going forward.

"We didn't defend; we had a season low in deflections," Lynx coach Cheryl Reeve said. "We only had two 'three-in-a-row' stops, which happened in the first quarter. We got none the rest of the way. We say this all the time: Rebounding tells the story. It told the entire story of the second half."

The Lynx were outrebounded by only one for the game, but really struggled in a third quarter in which they were outscored 27-16. Damiris Dantas and Napheesa Collier combined for 17 rebounds Sunday, but it will need to be more of a committee effort on the boards.

The Sun's 0-5 start gets further and further in the rearview mirror as they get closer to a .500 record. For the most part, coach Curt Miller is pleased with his team's defense, even without a rim protector like Jonquel Jones, who opted out this season. But the Sun are second-to-last in the league in 3-pointers made (82) and 3-point percentage (30.3).

"We have a lot of really high-quality WNBA defenders," Miller said, noting that Alyssa Thomas leads the way. "So we have a chance to be really disruptive.

"My concern is our offensive consistency. We just have not shot the ball well from the 3-point line. You would not know it by practice; our players are making a ton of shots in practice. It just hasn't translated to games."

The Mercury are facing something similar to Minnesota: They're without a star center in Brittney Griner, who has been defensive player of the year twice. Phoenix announced Saturday that Griner had left the WNBA's bubble for personal reasons. If she comes back, she'll need to quarantine at least seven days.

So the Mercury's challenge is figuring out the best way to play without Griner, who has been so big a part of the team since 2013. The offense becomes more guard-oriented, which is actually OK considering they have Diana Taurasi (coming off an emotional, Kobe Bryant-inspired 34-point game Sunday), Skylar Diggins-Smith and Bria Hartley.

Taurasi said rallying to salvage things even after an up-and-down season is kind of a Mercury trademark.

Said coach Sandy Brondello: "We've been exploring trying to play a little bit differently. We've got multiple pick-and-roll plays. Spreading the floor a little bit more if we can. You can't just change your whole style; we want to tweak our style."

Fever coach Marianne Stanley was irritated that Seattle guard Sue Bird didn't play in Thursday's game, and Indiana rode her indignation all the way to a victory. It seemed a bit strange -- Bird (knee) clearly wasn't sitting out to annoy the Fever; she missed Saturday's game against Las Vegas, too -- but Stanley has been a coach for a long time and maybe was just looking for a way to fire up her team.

It might be what they needed. Guard Kelsey Mitchell is averaging a team-high 18.8 points, and point guard Julie Allemand (8.2 PPG, 5.5 RPG ) is in the rookie of the year conversation. But the Fever have not been a playoff team the last three years, and perhaps mentally must clear the hurdle of believing they can do it this year. Right now, they're in the final playoff spot.

The Wings can feel pretty good about their past four games; they got victories over Phoenix and Washington, and had single-digit losses to Minnesota and Los Angeles. They had a fourth-quarter lead against the Sparks on Sunday before a cold spell hurt them, and they fell 84-81. They were outscored 25-15 in the final period, and it's a lesson as to what they need the rest of the way to climb into playoff contention.

"We have to put more stretches together," said guard Marina Mabrey, who has moved into the starting lineup to join her former Notre Dame teammate Arike Ogunbowale. "We can't have such scoring droughts, and having teams go on runs, and we can't control it."

On Wednesday, the Mystics got their first win in the month of August -- beating Atlanta -- thanks largely to rookie Stella Johnson's 25-point game. It was a cool moment for a player who was cut twice this year and now is getting a chance with Washington.

Johnson went 0-for-6 from the field on Friday, and the Mystics lost to Dallas. But then she bounced back with a strong game against Phoenix on Sunday, although Washington fell 88-87. Johnson had 12 points against the Mercury.

Coach/GM Mike Thibaut wants to give some time to youngsters like Johnson now, and it might pay off down the road. There's also the continued development of Myisha Hines-Allen, who in her third season is averaging 16.2 points and 8.4 rebounds, and has really made big steps forward.

It might not be hyperbole to say, "Look out for the Dream" even though they just snapped a 10-game losing streak by beating the Lynx on Sunday. The optimism is based on that win, plus them taking the Sparks to overtime Friday. And they might get back rookie of the year candidate Chennedy Carter from an ankle injury when they play Washington on Wednesday (ESPN2, 7 p.m. ET).

We might finally be seeing something closer to the team that the Dream can be. But they have to clean up unforced turnovers and make their offense run more smoothly. Carter will help a lot. She initiates offense well, and while she might turn over the ball, it's usually always because of aggressive mistakes, which the Dream can live with.

The fewest games any WNBA team has won in a season is three; that happened to Washington in 1998 (the Mystics' inaugural season) and Tulsa in 2011. This is a shorter season than any previous one (22 games), and the rookie-laden Liberty were expected to struggle. Coach Walt Hopkins thinks the hesitancy his team has on court in many areas is due to a lack of confidence. But how do the Liberty build that with just one victory?

"It can't come from wins and losses. It has to come from the ability to know that you put the work in in the gym," said Liberty guard Kia Nurse, who said she is seeing that effort in workouts from her teammates. "That's where you're going to find your confidence and your rhythm." 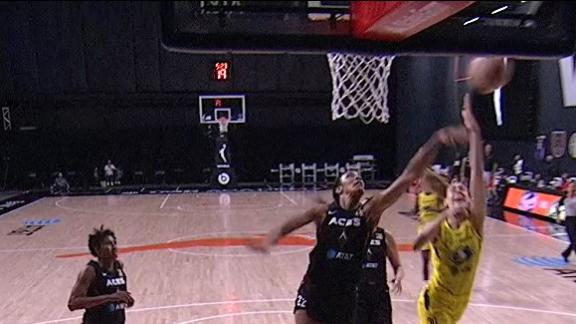 Wilson denies Stewart at the rim
Breanna Stewart tries to get the layup past A'ja Wilson, but she is denied as the ball is swatted out of bounds. 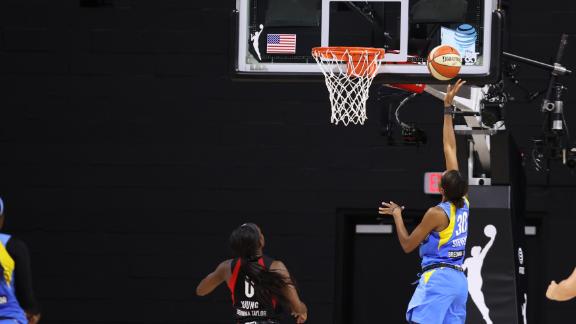 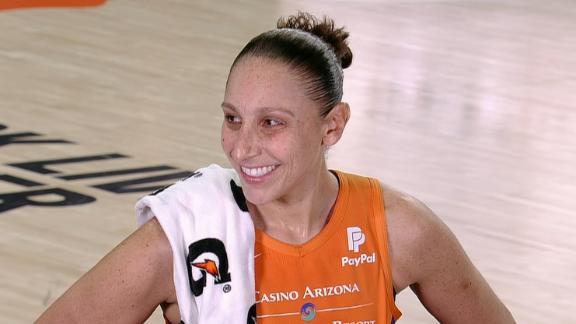 Taurasi admits she was 'hesitant' to wear Kobe's No. 8
Diana Taurasi talks about her decision to wear Kobe Bryant's No. 8 on her jersey and why she was nervous to do so, saying it was a "bittersweet moment."
Report a correction or typo
Related topics:
sportsespnchicago skywnbanew york libertydallas wingsseattle stormatlanta dreamlas vegas acesindiana feverconnecticut sunespnwlos angeles sparksminnesota lynxphoenix mercurydailywashington mystics
Copyright © 2021 ESPN Internet Ventures. All rights reserved.
More Videos
From CNN Newsource affiliates
TOP STORIES