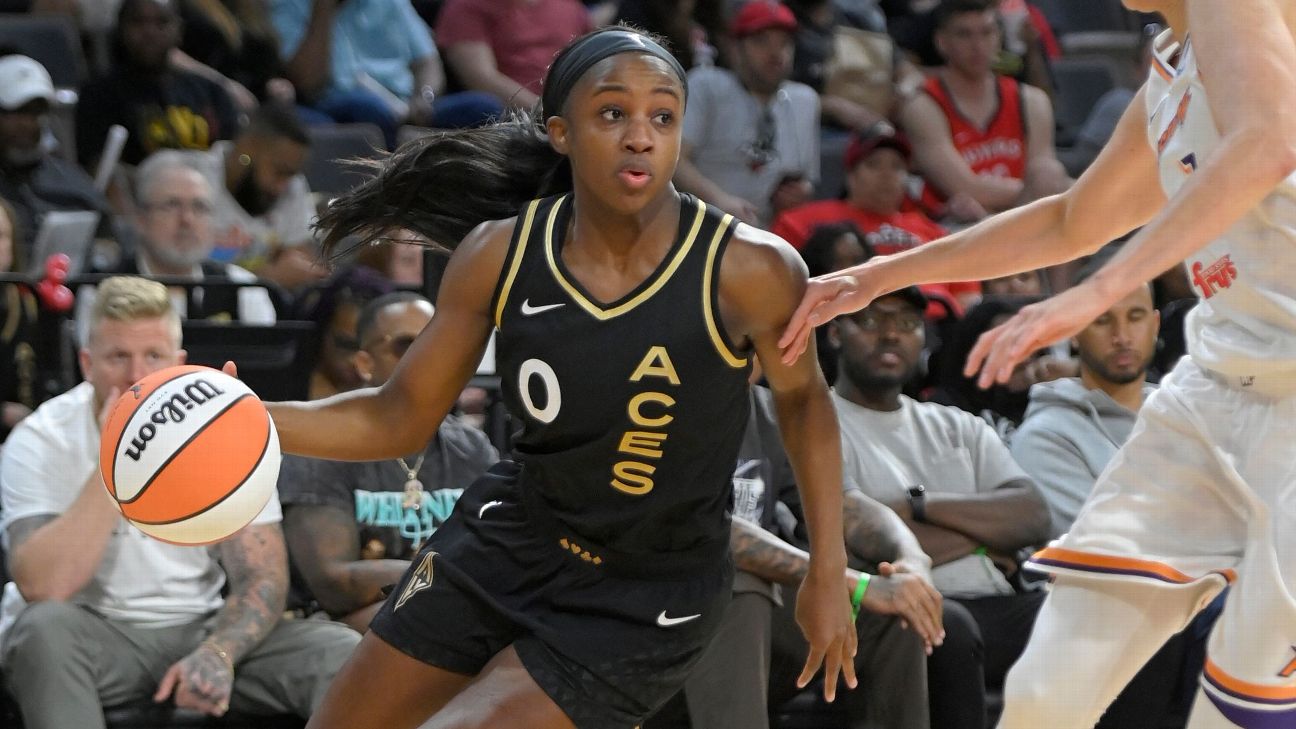 Former coach Bill Laimbeer was back in Las Vegas over the weekend and talked about how much he liked what he was seeing from the Aces. His successor, Becky Hammon, feels the same way. The Aces have looked pretty good to everyone -- except the Phoenix Mercury, to whom they've looked annoyingly good. Three wins already over the Mercury are part of Las Vegas' 6-1 start as the Aces return to the No. 1 spot in ESPN's Week 3 WNBA Power Rankings.

Phoenix, of course, broke the Aces' hearts last season with a 3-2 playoff semifinal series upset, which, as it turned out, were Laimbeer's final games as coach.


Laimbeer got a nice welcome back from the organization and explained to media that he felt he didn't have the energy anymore to keep coaching. Once Hammon was in the Aces' sights -- she was hired in late December -- Laimbeer was happy to hand off the baton. Hammon and the Aces are now running with it. While star forward/center A'ja Wilson has been her usual reliable self inside, Las Vegas' guards have been stealing the show thus far.

Not that Wilson minds; she wants only to win, and she knows that the way guards Jackie Young, Kelsey Plum and Chelsea Gray are playing is exactly what the Aces need to keep their mojo going. Young (2019) and Plum (2017) are former No. 1 draft picks who are currently the Aces' leading scorers at 19.3 and 18.3 points per game, respectively. Gray has championship experience, winning the WNBA title with the Los Angeles Sparks in 2016 and leads the team in assists (5.6). Wilson, Gray, Plum and Young were all gold medal-winning Olympians last year -- the first two in 5-on-5 and the other two in 3x3.

Laimbeer drafted Young as a junior out of Notre Dame because he knew the multidimensional threat she could be, and Hammon said she doesn't see a ceiling for the 6-foot guard, who is just 24.

"She literally does everything," Hammon said of Young. "She play makes, she scores, she rebounds, she always knows what we're doing defensively ... what we're doing offensively. She's cerebral; she's always prepared. I don't know how good she can be, honestly."

All five starters, which also includes forward Dearica Hamby, are averaging double figures in scoring. Hamby is doing the same in rebounding (10.0), while shooting a team-best 60.9% from the field. Plum points to Las Vegas' chemistry and how that hasn't been disrupted by the coaching change. The Aces played well for Laimbeer, and they are doing the same for Hammon.

"It's a comfortability thing. Becky has an environment set up where we're a team," Plum said. "She believes in all of us to make the right play."

Hammon continues to stress the Aces' defense: "It's demanding, what we're asking them to do defensively. But as long as their buy-in factor is high, I really believe in the defense that we can put out on the floor every night."

After two victories over Phoenix and one over Minnesota this past week, Gray said, "I think we're not even scratching the surface of where we can be. Any time somebody gets in the middle of your defense, you're in trouble. So when we can cut out those possessions when we have lulls or we are not on point, that's when you'll start to see another level."

This week: vs. Los Angeles (Monday), at Chicago (Saturday)

The Sun have DeWanna Bonner back from overseas, although she rested and didn't play in Sunday's victory at Indiana. She did play in the Sun's other two games last week, wins at New York and at home against the Fever. The Sun have won four in a row after falling in their opener at New York, and everything would seem fine -- except the injury bug has bit them again. Starting guard Jasmine Thomas played just eight minutes Sunday before leaving with a knee injury. Coach Curt Miller said Thomas would get an MRI and seemed obviously concerned about her after the game.

Still, he was pleased with the defense the Sun played -- a standard calling card for them -- especially holding Fever star Kelsey Mitchell to five points Sunday. Next up is another high-scoring guard, as the Sun face Dallas and Arike Ogunbowale in back-to-back games.

Sunday was big for the Sky: 2021 WNBA Finals MVP Kahleah Copper made her season debut (12 points) after tearing it up overseas as EuroLeague and Spanish League MVP. Candace Parker got the second triple-double of her career; at 36, she is the oldest WNBA player to accomplish that feat. And Emma Meesseman had a strong return to Washington, where she spent the first seven seasons of her WNBA career, with 11 points. The Sky's victory in D.C. was enough to bump them up in the Power Rankings despite their three-point loss Wednesday at Seattle.

Guard Rebekah Gardner, who turns 32 in July and is a WNBA rookie after a lengthy career overseas, continues to make an impact as well as having a heartwarming "underdog" story. She has scored in double figures in three of her four games for the Sky and is averaging 9.8 PPG.

This week: vs. Indiana (Tuesday), vs. Las Vegas (Saturday)


Previous ranking: 1
It's somewhat unusual that both of the Mystics' losses this season have been at home, including to Chicago on Sunday. Earlier in the week, Washington won at Dallas and Atlanta.

Veteran center Elizabeth Williams has joined the Mystics, which helps shore up their inside game, and rookie center Shakira Austin scored in double figures all three games this past week. Austin's 20 points on 9-of-11 shooting and eight rebounds in the win over the Wings was particularly impressive. The Mystics will continue to balance how much Elena Delle Donne and Alysha Clark play, and there are going to be times -- like against the Sky -- that the team doesn't look quite as sharp. But overall, it's a good start for Washington.

This week: vs. Atlanta (Tuesday), at Connecticut (Saturday)

The Storm were happy to have Breanna Stewart back after she missed Seattle's back-to-back losses against Phoenix because she tested positive for COVID-19. With Stewart, Seattle beat Chicago and Los Angeles this past week, both by three points. She particularly looked like her usual self with 28 points against the Sparks.

The Storm also got a lift from young center Ezi Magbegor, who tied a career high with 21 points against the Sky. With center Mercedes Russell not having played yet because of a non-basketball injury, Magbegor is getting a lot of court time. She averaged 13.3 minutes as a rookie and 15.2 last year, and now is at 28.8. That should serve the Storm well whenever Russell can return.

The Wings started the week with a loss to Washington but followed that with wins over Phoenix and Minnesota. The difference? Arike Ogunbowale was held to a season-low six points by the Mystics, then took out her frustration on the Mercury (37 points, five assists) and Lynx (20, seven). Marina Mabrey had 13 points and 10 assists against Phoenix and clearly enjoyed being booed by the Mercury crowd. She followed that up with a season-high 22 points against the Lynx.

Guards Ogunbowale, Mabrey and Allisha Gray are leading the way offensively for the Wings, who are still waiting for their interior game to really kick in. Forward Satou Sabally, who returned late from overseas, started her WNBA season with 11 points in the win against Minnesota. Center Teaira McCowan, in her first season in Dallas after being obtained in a trade from Indiana, has appeared in five games but hasn't played more than 10 minutes in any of them.

So far, so good for rookie Rhyne Howard and the Dream. They topped Indiana while hitting the century mark in points (101) last week and also gave Washington a run for its money before falling by five. Howard continues to impress, averaging 20.5 PPG and shooting 46.7% from 3-point range.

Veteran guard Tiffany Hayes is still resting after her return from overseas play. When she is back on the floor, that will be one more weapon for the Dream, who have to be pleased with their start.

This week: at Washington (Tuesday), vs. Phoenix (Sunday)

The Sparks got a new team president this past week, as longtime Los Angeles sports executive Vanessa Shay took over. She's eager to expand the footprint the team has in Southern California, an area she knows very well. It was exciting news for the franchise, but the Sparks would like to see better results on the court.

Los Angeles lost to Minnesota -- which was the Lynx's first victory this season -- and to Seattle, although each defeat was by just three points. Monday, center Liz Cambage will make her return to Las Vegas, where she played for two seasons before joining the Sparks this year. That's the start of a very busy week for Los Angeles, which has four games and a chance to either right the ship or really fall into a hole.

This week: at Las Vegas (Monday), vs. Phoenix (Wednesday), at Indiana (Friday), at Minnesota (Sunday)

As bad a week as it was for the Mercury, with two losses to Las Vegas and one to Dallas, they are still just out of what would be a playoff spot because the teams ranked below them also struggled. Guards Skylar Diggins-Smith and Diana Taurasi had words on the bench during Tuesday's loss to the Aces. Diggins-Smith subsequently missed games Thursday and Saturday with a non-COVID-19 illness. Coach Vanessa Nygaard isn't thrilled about the schedule, as Phoenix has faced league-leading Las Vegas three times in its first six games.

Center Tina Charles, in her first year in Phoenix, has been held to single-digit scoring twice already, something that happened just once all of last season.

This week: at Los Angeles (Wednesday), at Atlanta (Saturday)

Guard Kayla McBride's return from overseas was the best news for Minnesota. She had 24 points in her season debut at Los Angeles as the Lynx got their first win of the season. That was followed by losses at Las Vegas and Dallas, but at least there is starting to be a little more good news than bad for the Lynx.

Forward Natalie Achonwa (hamstring) has been cleared to return to play after missing five games, and that will help. So should the fact that the Lynx get to play at home twice this week. They will honor longtime Lynx star Seimone Augustus, now an assistant coach in Los Angeles, when the Sparks visit Sunday.

This week: vs. New York (Tuesday), vs. Los Angeles (Sunday)

The Fever have lost four in a row, although Indiana fans on Sunday got a nostalgic look back at the franchise's high point as the 2012 WNBA championship team was honored. Those players returned to celebrate their 10-year anniversary, but it didn't help the current Fever in their 92-70 loss to Connecticut.

Rookie standout NaLyssa Smith has missed the past three games with an ankle injury, which has been a big loss, as she is averaging 13 points and 10 rebounds. In her fifth WNBA season, Kelsey Mitchell crossed the career 2,000-point mark Sunday, but she has scored just five points in two of her past three games.

This week: at Chicago (Tuesday), vs. Los Angeles (Friday)

The promise the Liberty showed in beating Connecticut in their season opener has been followed by four consecutive losses, including by 27 points to the revenge-minded Sun last Tuesday. The Liberty will have had a week between games before a road trip starts Tuesday.

New York is the latest stop for guard Crystal Dangerfield, as the Liberty signed her to a hardship deal. Her first game for them is expected to be against her former team, Minnesota, which she has already faced this season during a brief stay as a hardship player with Indiana. The Liberty have lost forward/guard Jocelyn Willoughby for about six weeks after she tore her left quadriceps tendon. She was out all last season with an Achilles injury. 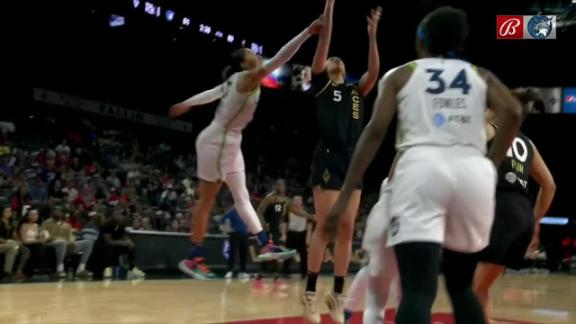 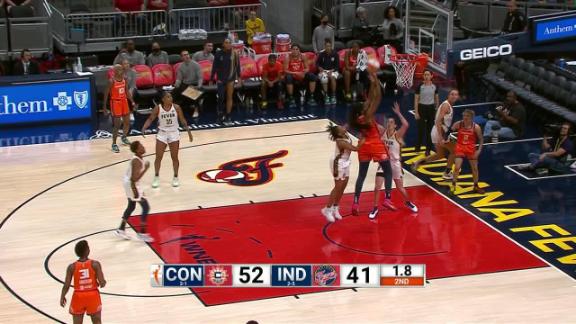 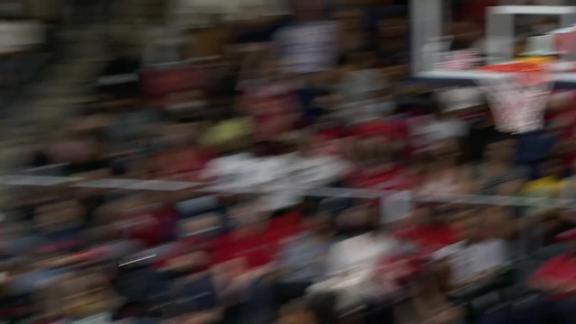 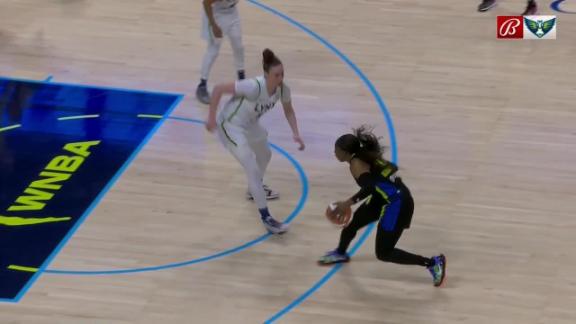 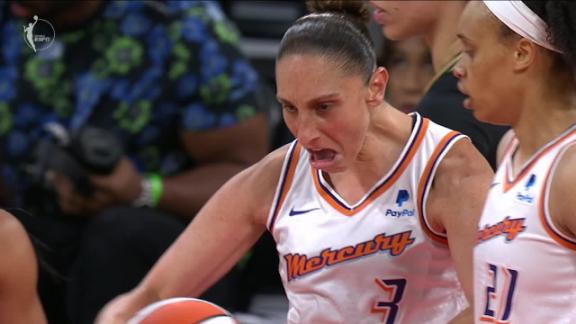