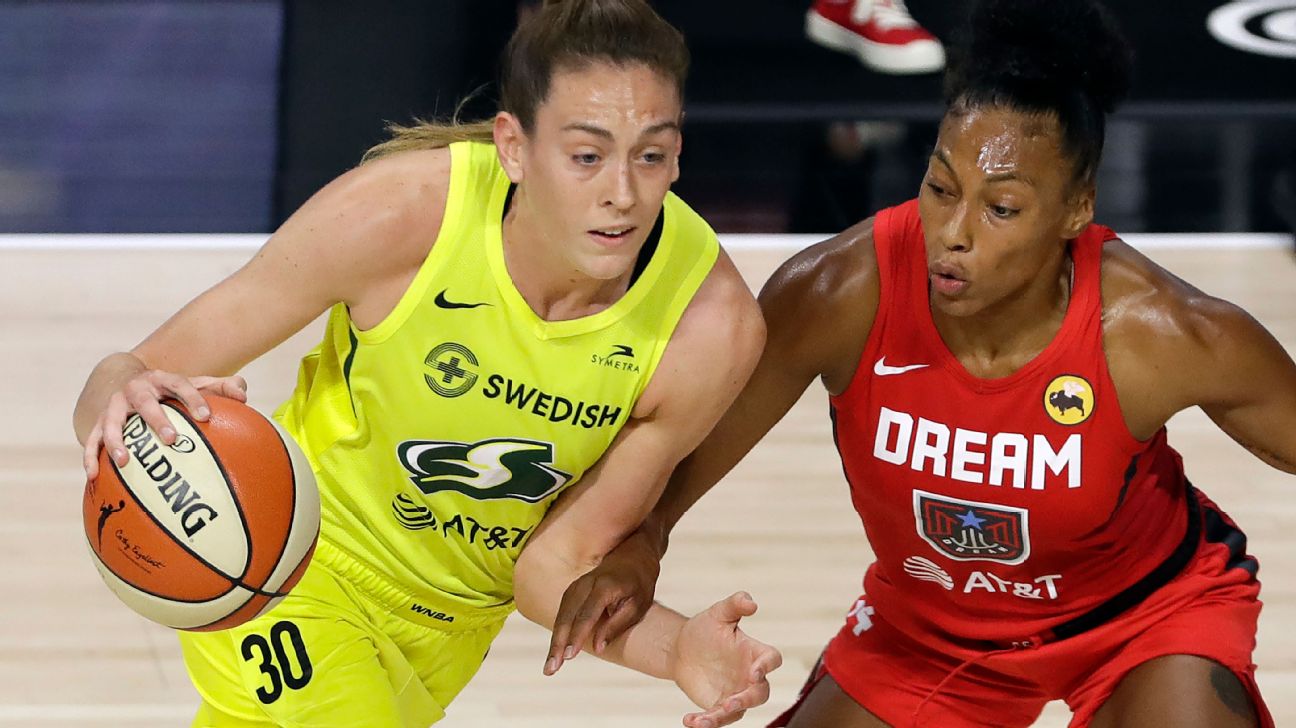 We've reached the halfway point of this shortened 22-game WNBA season in Bradenton, Florida, with all teams having played 10 or 11 games. It's time to look at who might be favored to win the league's biggest awards for 2020.

Is Breanna Stewart the favorite to win a second MVP trophy? Will the Rookie of the Year make history? Who has improved the most? And which player has been the MVP so far for every team in the WNBA bubble?


Jump to: MVP | Rookie of the Year

The Storm are off to a 10-1 start, and Stewart is leading the way averaging 18.9 points, 7.9 rebounds, 3.5 assists and 1.4 blocked shots. She was the 2018 MVP, missed last season because of an Achilles injury, and has looked better than ever so far.

"I've grown in some areas," Stewart said. "Taking my time, recognizing what the defense is doing. Also, it's interesting to see the different defensive schemes from 2018 until now ... teams are playing me a little bit differently."

But really, they're playing her no more successfully. Meanwhile, Las Vegas Aces forward A'ja Wilson is making this a very close race, averaging 20.3 points, 8.5 rebounds, 1.6 assists and 1.3 blocked shots. There have been some other strong performances, but these two young stars have been the league's best so far.

She would be the lowest draft pick -- by a lot -- to earn the honor. Dangerfield was the fourth pick in the second round, at No. 16 overall, in April. Tracy Reid, the inaugural winner of the rookie honor in 1998, was the No. 7 pick, and no one taken lower than that has ever won the award.

It was a bit of a surprise to see Dangerfield drop so low in the draft. But she was happy going to the Lynx, where she has been reunited with former UConn teammate Napheesa Collier, last year's Rookie of the Year.

Dangerfield (13.6 PPG, 3.2 APG) has ascended in the rookie race both because of how she has played and because of injuries to other candidates. Top pick Sabrina Ionescu of the New York Liberty has been out since July 31because of an ankle injury and seems unlikely to return. No. 4 pick Chennedy Carter (17.0 PPG) of the Atlanta Dream became the rookie award front-runner, and she still might win it. But she has been out because of an ankle injury since Monday, and was projected to miss two weeks. That would be six games, which is a little over a quarter of the season.

There are multiple candidates, but right now, we lean slightly toward Laney, a guard/forward who wasn't even sure she'd play this season after she was waived by Indiana. The Dream picked her up, and she has been a staple: starting every game, averaging the most minutes (31.2) and ranking second on the team in scoring and assists (15.4 PPG, 3.3 APG) behind Carter.

But you could toss a coin between Laney and Washington Mystics forward Myisha Hines-Allen (14.2 PPG, 8.0 RPG) for this award. Hines-Allen has responded to the big increase in playing time with the likes of Elena Delle Donne and LaToya Sanders out this season. The Chicago Sky's Kahleah Copper and the Connecticut Sun's Brionna Jones are among the other top candidates.

Breanna Stewart as a leading candidate for league MVP makes her the obvious MVP for the Storm, too. But what's scary for the rest of the league is how many weapons Seattle has. Consider that the only game this season in which Stewart didn't score in double figures -- she had seven points last Wednesday against Atlanta -- the Storm still won 100-63 and hit a WNBA record-tying 18 3-pointers.


A'ja Wilson just turned 24 earlier this month and has expanded on a game that was already exceptional. Her numbers are similar to her 2018 Rookie of the Year campaign. Last year, her stats were down some, but that was to be expected with her sharing the court with center Liz Cambage. Wilson has played her role extremely well in her Aces career, both with and without Cambage, who is not playing this season because of a medical exemption.

At 34, Candace Parker is looking very strong. She's second on the Sparks in scoring (12.7 PPG) and leads them in rebounding (9.2). She is also averaging 3.7 assists, and nearly had a triple-double on Aug. 9. She's used to helping set the pace for Los Angeles, and she has done that well this season.

Napheesa Collier has all the more on her shoulders with Sylvia Fowles out indefinitelybecause of a calf injury. And even though she's only in her second season, Collier is one of the team captains and ready to handle the responsibility. She's averaging 14.9 PPG, 9.0 RPG and 3.3 APG, and she's committed to being more vocal as well.

Forward Cheyenne Parker is having the best season of her six-year WNBA career, responding well to increased playing time. She's averaging 13.7 points and 6.2 rebounds, and shooting 54.2% from the field -- all career highs. The Sky's core is the backcourt of Allie Quigley and Courtney Vandersloot, but Parker has matured into someone comfortable being a go-to player whenever needed.

In her first season with the Sun, forward/guard DeWanna Bonner has been what Connecticut hoped for. The longtime Phoenix standout is averaging 18.2 PPG, 7.8 RPG, 3.2 APG and 2.4 SPG. Forward Alyssa Thomas (14.5 PPG, 9.2 RPG and 4.6 APG) isn't far behind, though. The Sun had the biggest jump in the power rankings after their best week of this season, going 3-1. After starting the season 0-5, the Sun have made real progress.


Brittney Griner came into this season as one of the players thought to be in contention for MVP. And while Stewart and Wilson are leading that discussion, Griner is in the next tier. She's averaging 18.1 PPG and 7.6 RPG, plus a career-best 3.2 assists. She had a season-high 29 points Sunday.

Arike Ogunbowale didn't win the rookie of the year honors last year despite being the third-leading scorer in the league. She wasn't discouraged. Now she's leading the league in scoring (21.5 PPG). Sunday, she had a spectacular game in beating Phoenix: 33 points on an efficient 13-for-19 shooting, including 6 of 7 from 3-point range. She also had five rebounds and a key steal near the end of the game to seal the victory. Dallas had losses on Monday, Wednesday and Friday, but Ogunbowale was determined to get a win Sunday.

Guard Kelsey Mitchell is having the best of her three seasons, averaging 19.6 points and shooting 48.6% overall and 45.5% (30 of 66) from beyond the arc. Her 3-point percentage is third best in the league. The Fever aren't quite there yet in being able to beat the league's best teams, but they have to like what they are seeing of Mitchell's development.

The Mystics got off to a good start at 3-0 in their July games, but they are 0-7 in August. Considering all the players they don't have this season, that's not really surprising. Some good news: Myisha Hines-Allen is having her best season in her third year. Her development in what is looking like a pretty tough 2020 season is going to help the Mystics in the future.

Layshia Clarendon, 29, is the Liberty's most experienced player, and she has had to be a mentor to a team that was expected to struggle to get wins this season. She has shown a lot of leadership while also having a 13.4 scoring average and 47.9 shooting percentage, both of which would be the best of her career.

Betnijah Laney has had to fill the MVP role of late. But rookie Chennedy Carter -- who has already had a 35-point game -- is the key to the Dream. Her injury took away Atlanta's best scorer and playmaker, and Atlanta now has lost eight in a row. If Carter can come back by next week, she might be able to salvage her Rookie of the Year hopes, if not the Dream's season. 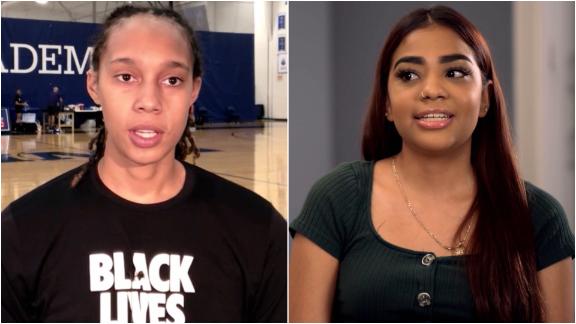