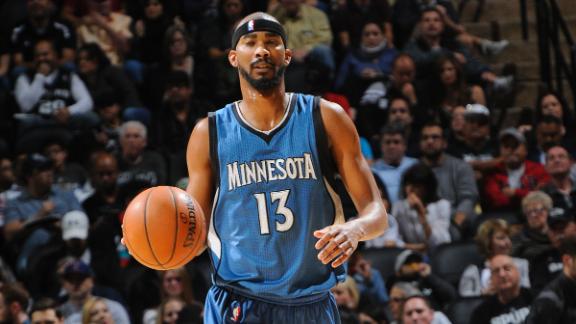 The Minnesota Timberwolves have put veteran swingman Corey Brewer back on the trading block, according to league sources.

Sources told ESPN.com that the Timberwolves, beset with injuries and mired at the foot of the Western Conference with a record of 5-19, are again engaging contending teams in trade discussions for Brewer after making him available in mid-November and then abruptly pulling him off the market.

The Houston Rockets and Cleveland Cavaliers, sources said, remain the most interested suitors for Brewer, but have also been joined by the Los Angeles Clippers.

ESPN.com reported last month that the Wolves were in active trade discussions with multiple contending teams that had interest in Brewer, most notably Cleveland and Houston.

But the Wolves pulled Brewer off the table soon thereafter, thanks largely to the loss of high-scoring swingman Kevin Martin to a broken wrist on top of the ankle injury that has sidelined point guard Ricky Rubio, feeling they were too shorthanded to part with Brewer.

But Wolves coach and team president Flip Saunders, after calling Brewer "too valuable to trade" on Nov. 20, publicly acknowledged last week that the Wolves' many injuries and subsequent struggles to compete in the difficult West have forced Minnesota to concede that the team is shifting from a "retool" mode to a "rebuild."

Houston and Cleveland remain the best positioned to make a deal because both teams possess an active trade exception large enough to absorb Brewer's $4.7 million salary. But sources say that the Wolves are seeking a future first-round pick in exchange for Brewer, something the Cavaliers are reluctant to surrender.

The Rockets, sources say, hope to sell Minnesota on going through with the swap in exchange for a 2015 second-rounder via New York that the Rockets possess. It's a pick with the potential to be attractive come June given the Knicks' ongoing struggles.

ESPN.com has learned the Wolves granted permission to the Rockets and Cavs last month to talk to Brewer's representatives when a trade appeared imminent, since both teams would hope to persuade Brewer to waive his $4.9 million option for next season to help facilitate the trade and lessen the long-term financial implications of acquiring him. It's believed that Brewer will consider doing so for the opportunity to join a title contender.

Houston and Cleveland have both coveted Brewer for some time and, thanks to their respective trade exceptions, have the means to acquire him without giving up any key players on top of the draft compensation Minnesota is seeking.

The Clippers, by contrast, are handcuffed in any efforts they make to improve their squad. By virtue of spending their full mid-level exception onSpencer Hawesover the summer, L.A. is now subject to the league's $80.8 million hard cap. Sitting less than $800,000beneath the hard cap, its options are very limited, as league rules preclude them from making any trade or using any exception (trade exception or otherwise) that increases their payroll beyond the hard cap.

To acquire Brewer, in other words, would require the Clippers to send out at least $4 million in salary, which makes finding a workable trade that's attractive for both teams difficult.

If Brewer were to wind up in Cleveland, he'd be reunited with Kevin Love, with whom he has a close relationship after their well-chronicled success on the fast break as teammates in Minnesota. Brewer ranked as one of the league's foremost scorers in transition last season on the end of Love's outlet passes.

It's known the Cavaliers are looking to get stronger at shooting guard as well as reduce LeBron James' minutes load, so Brewer would likely play multiple positions should the Cavs find a way to seal a deal for him.

The Rockets, meanwhile, have been known to covet Brewer since last season, with sources saying they registered trade interest in the 28-year-old even before Brewer uncorked a career-high 51 points against Houston late last season. Rockets coach Kevin McHale drafted Brewer in Minnesota when he was still the Wolves' general manager and, according to sources, spoke directly to Brewer last month when the Wolves gave Houston permission to do so.

Brewer was part of two NCAA title teams at Florida and, after going to Minnesota with the seventh overall pick in the 2007 draft, also played on a championship team in the NBA with Dallas in 2011.

"It's tough for me, I'm not going to lie," Brewer recently told the StarTribune of Minneapolis when asked about finding himself in the midst of a youth movement as a veteran. "When I came back here, I wasn't expecting this, to rebuild again. It comes with the territory. It's business. It's basketball. It's what I love to do. So I wake up every day and I come to work."