Woman hospitalized after being hit by foul ball at Wrigley Field 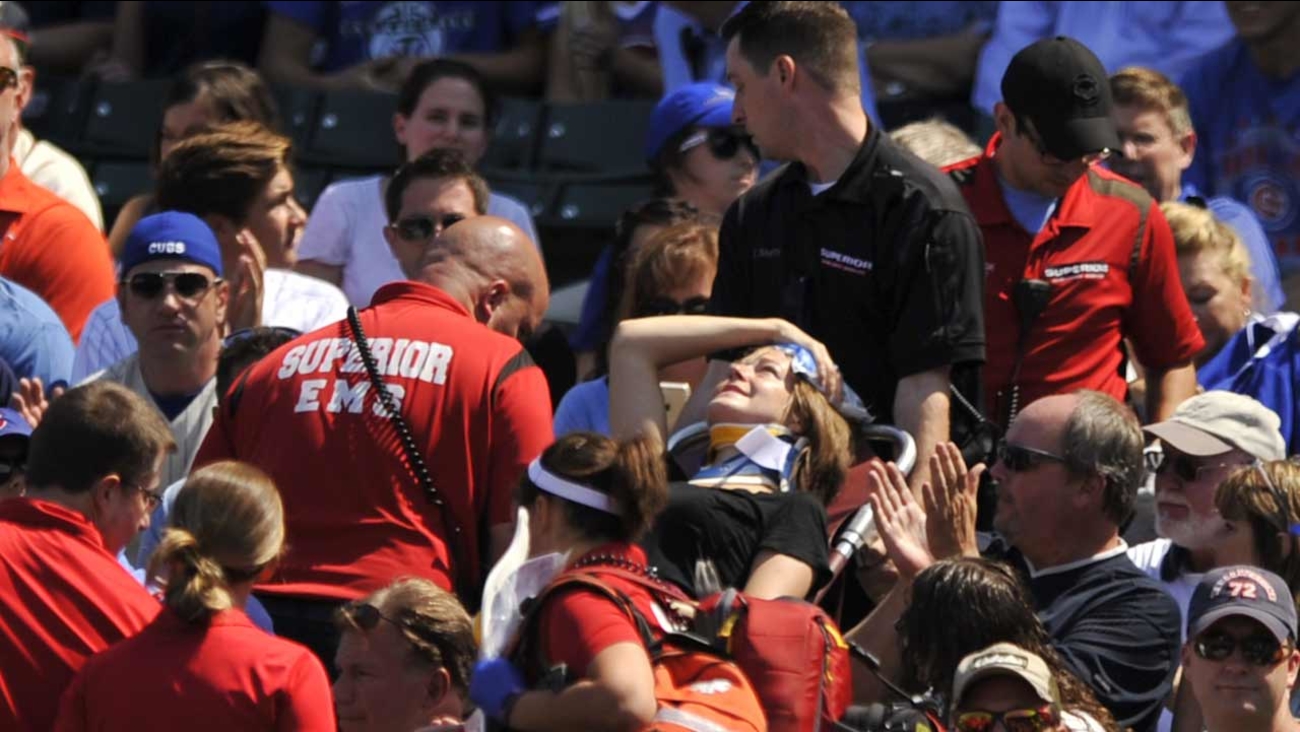 A fan is carried away after being hit a by a line-drive foul ball during the first inning of a baseball game between the Cubs and Braves at Wrigley Field. (AP Photo/Paul Beaty)

CHICAGO -- A fan at Sunday's Chicago Cubs game was rushed to a local hospital after being hit by a line drive foul ball at Wrigley Field.

The woman who was hit was sitting near the front row along the first base line. Fans sitting near her said it happened so quickly, she had almost no chance to get out of the way.

The ball came screaming off the bat of Kyle Schwarber toward the stands, behind first base. The ball hit the unidentified fan square in the head. It happened so hard, it bounced back onto the field.

Bly Balais would have been hit if she hadn't been sitting right in front of him.

"I don't know if she was paying attention or not, but she had no chance," Balais said.

Balais said the woman was conscious and talking when paramedics took her out of the stands for medical treatment.

"I knew whoever got hit was probably hurting pretty good," said Cubs manager Joe Maddon. "We're all very sensitive to that."

Schwarber tweeted after the game, "Thoughts and prayers go out to the woman who was struck by the baseball today."

It is the latest in what some believe is a growing number of injuries to fans at baseball parks around the country. A Detroit woman spent the night in the hospital Friday after being struck by a foul ball in the face, prompting a reaction from Tigers superstar Justin Verlander.

"It's something that needs to be addressed immediately," Verlander said.

The issue is not exclusive to baseball. The NHL has increased safety measures recently to try to prevent errant pucks from flying into the stands and injuring fans.

Several fans, including Patricia Higgins, have filed suit after being hit by a puck at a Chicago Blackhawks game. As for baseball, right now, the netting is typically just behind home plate.

"I'm always the one that tells people to pay attention," Balais said. "I saw it coming at me and I had my hand full of nachos and thought, 'Yeah, probably not the best thing.'"