According to Nielsen, Sunday night's prime-time telecast outperformed the NBA Finals and the Stanley Cup finals.

President Barack Obama pointed out this fact in a phone call to the team, which was tweeted out by the White House.

Watch @POTUS call the @USSoccer_WNT to congratulate them on their World Cup victory. #OneNationOneTeam https://t.co/uIty0Gu5Dg

"Next time I see the men's team, I need to remind them that you beat the men in viewership!" the President joked.

Even though the U.S. men's team never made it to their finals, they made much more money for simply competing.

Worldwide, FIFA's payout for the Men's World Cup was $576 million. Yet, it was only $15 million for the Women's World Cup.

"Our basic message is their basic discrimination against women needs to stop," said Shaunna Thomas, the co-founder of Ultraviolet.

The women's organization posted an online petition to the executive committee of FIFA demanding equal pay.

Jerome Valcke, secretary general of FIFA, was asked in 2014 if his organization had any plans to equalize pay.

"That's not even a question I will answer because it is nonsense! We played 30th (men's) World Cup in 2014 and we are playing the seventh women's World Cup, so things can grow step-by-step. We are still another 23 World Cups before potentially women should receive the same amount as men," Valcke said.

"One hundred years from now, women can expect pay equity with men? It's an absurd timeline," Thomas said.

Female tennis players do receive equal pay for the sport's four Grand Slam tournaments. That happened after years of activism from athletes like Billie Jean King.

Most other female sport leagues, including the WNBA and LPGA, suffer substantial pay gaps with their male counterparts.

Soccer fans rallying to celebrate the Women's World Cup team in downtown Los Angeles hope the team's win may be a turning point for the sport.

Goalkeeper Hope Solo tweeted out a photo including a sign "Equal Pay 4 Athletes."

Could not agree more! pic.twitter.com/tP9LT0IQGh

Forward Abby Wambach has long advocated for a change.

"Obviously, we're talking about wage gap difference, and, for me, the transcendence we can go from sport to cultural problems is huge. If we can impact on a positive way on any level, we've done a great job!" she said after the victory celebration.
Related topics:
sportsfifa world cupworld cupfifasocceru.s. & worldequal rights
Copyright © 2020 KABC-TV. All Rights Reserved.
RELATED 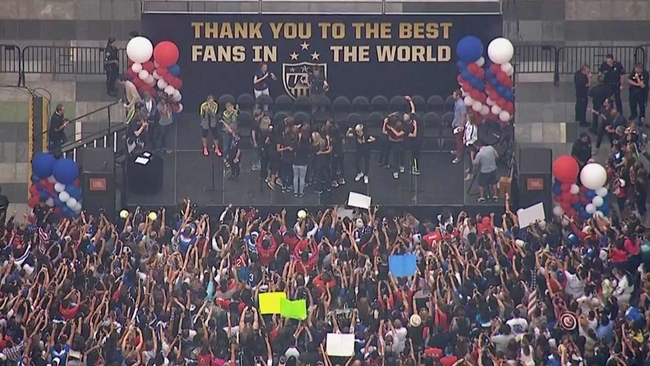 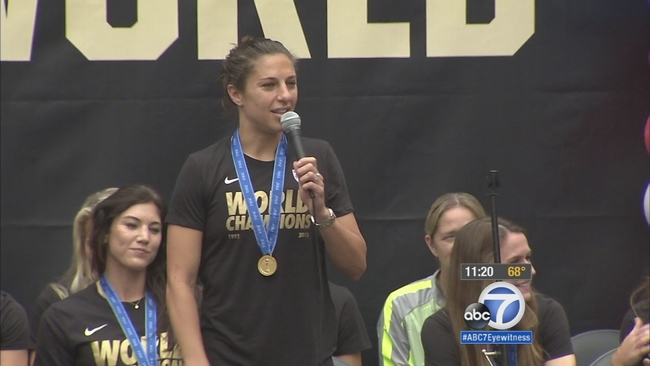 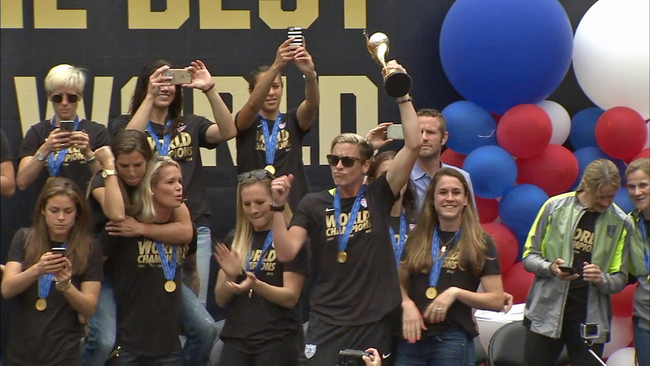 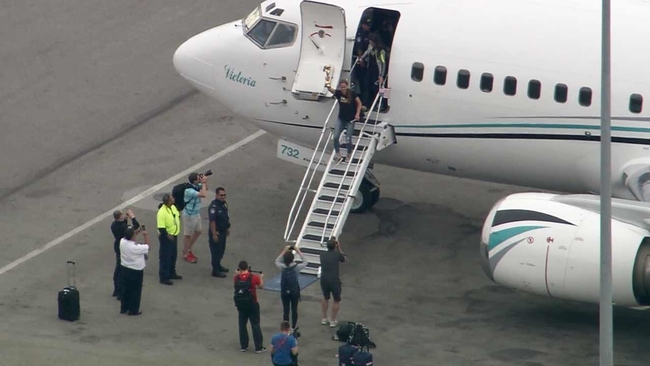