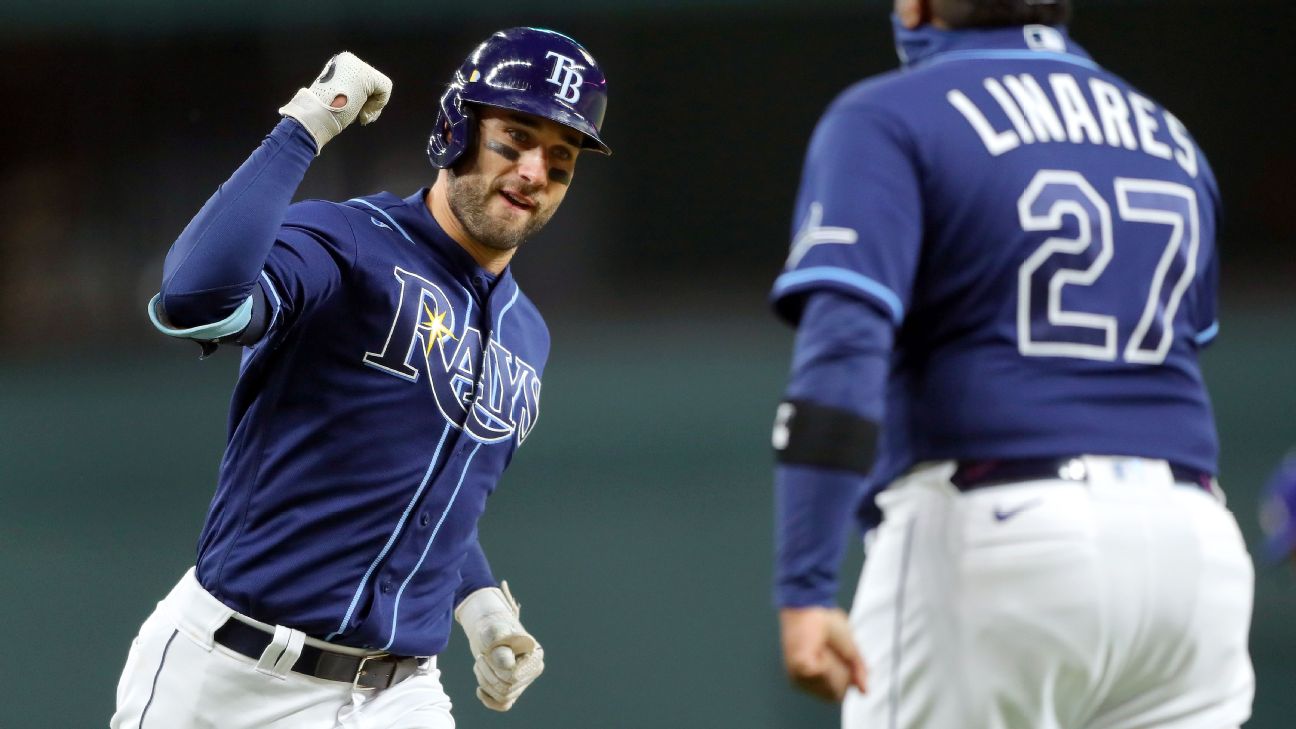 After all the oddities of the MLB regular season and postseason, the 2020 World Series pits baseball's top two teams against each other. While we've grown accustomed to seeing the Dodgers playing for the championship, this is the first Fall Classic for the Rays since 2008 and only the second in franchise history.

Here's what you need to know for Game 5 on Sunday, including a look at the pitching matchup, predictions, odds, other key numbers and more.

ARLINGTON, Texas -- Now that the series is tied 2-2, Clayton Kershaw won't get the chance to pitch the Los Angeles Dodgers to a World Series championship after his team's Game 4 collapse, but his importance in Game 5 on Sunday can't be overstated. He'll need to be the stopper the Dodgers always expect him to be -- because all of a sudden, the Rays have grabbed some momentum.

Kershaw has a career 4.68 ERA in the World Series, though he pitched well in Game 1. He'll take on Tyler Glasnow for a second time in this Series, and the wild and wacky finish to Game 4 will undoubtedly still be fresh on everyone's mind.

Meanwhile, Glasnow could use some redemption after a Game 1 collapse. He walked six batters in less than five innings pitched and hasn't completed a full six innings all season. After using their top relievers in Game 4, the Rays will take as many innings as they can get out of Glasnow in Game 5.

In a season that has been unexpectedly defined by a pandemic, followed by labor strife and a shortened, 60-game regular season, the World Series is down to a best-of-three. After the drama of Game 4, what kind of encore do the best two teams in baseball have in store? Stay tuned. -- Jesse Rogers

David Schoenfield:You want a prediction after THAT game? LOL. The Dodgers have been tested many times in the playoffs over the past eight years, but I don't know if they've ever faced a tougher mental test than coming back from maybe the most shocking, heartbreaking playoff defeat since the infamous Pedro game for the Red Sox in the 2003 ALCS. What will happen? I have no idea, but I really, really want Clayton Kershaw to pitch a good game. Rays 5, Dodgers 4.

Dan Mullen:Did you see what happened last night? How is anyone supposed to pick against the Rays after that display of just-won't-go-away magic? Throw in the fact that, as Dave writes today, the second time around in a postseason series has been the real issue for Clayton Kershaw in October, and I'm going to pick Tampa Bay to take a 3-2 series lead and send Dodgers fans into even more despair heading into another "travel" day.Rays 5, Dodgers 4.

Rogers:Kerhsaw will exorcise his World Series demons once and for all after throwing a solid effort in Game 1. We've seen him out-pitch Glasnow once, and he'll do it again in Game 5, knowing the Dodgers need to get their swagger back after their Game 4 ninth-inning collapse. The Rays got their dramatic win in the series, so it's the Dodgers' turn to pull off a close one. Glasnow will be better than he was in Game 1, but Los Angeles wins.Dodgers 5, Rays 4.

If you were watching Game 4, you just saw it, when Rays journeyman Brett Phillips' two-out hit off Dodgers closer Kenley Jansen -- Phillips' first hit since the regular season after Jansen walked Randy Arozarena-- in the ninth scoredKevin Kiermaier from second for a 7-7 tie and then, improbably, plated Arozarena as well when catcher Will Smith lost the ball at home plate for a Rays walk-off win. Just like that, the World Series was evened up, making it a best-of-three showdown between L.A. and Tampa Bay.

Randy Arozarena has gone from an unknown outfielder to this October's breakout star. Going into the playoffs, you might have been asking, "Who is this guy?" But the Rays' trade for him has been a huge factor in their postseason run. Arozarena is now a living, breathing postseason record book in cleats, having set MLB records for home runs (nine) and total bases (58), and he's tied for the all-time record for postseason hits (26). What's more, he has been flashing some leather in the outfield andsome sweet celebration dance moves on the field. 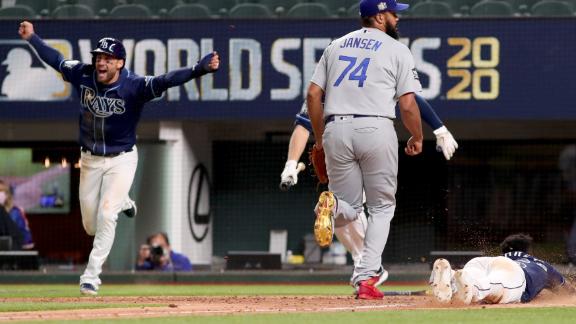 Rays come out victorious in Game 4 nail-biter against Dodgers
Brett Phillips' clutch single in the bottom of the ninth propels the Rays over the Dodgers in Game 4 of the World Series. 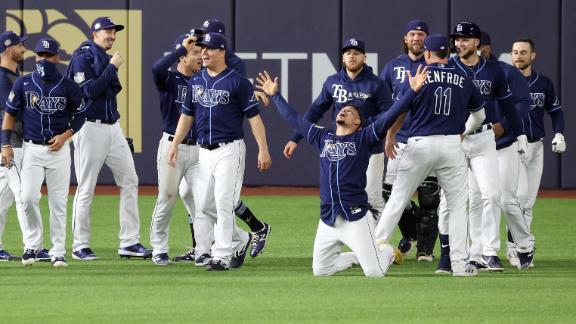