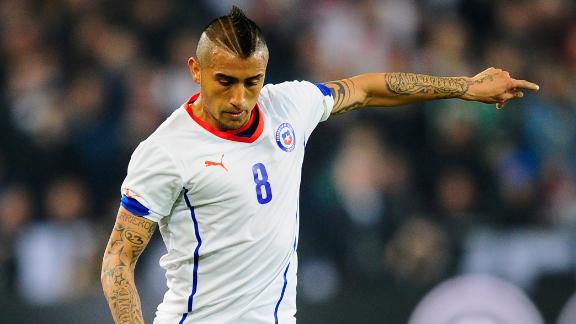 Why he's ranked: This dynamic midfielder has been the subject of much speculation in recent months, with Manchester United among the clubs reportedly keen to lure him away from Juventus, and starring displays at the World Cup will do his marketability no harm. A complete midfielder, he is as good a passer as he is a tackler, and Chile need him to confirm his A-list status is justified at Brazil 2014.

Key stat: Led Italian champions Juventus in goals scored (21), assists (13) and chances created (164) in Serie A over the past two seasons.

What the experts say: "More than a midfielder, he is an 'all-fielder.' Vigorous when defends, he always has an eye to score. He is essential in Juventus and Chile." - Leonardo Bertozzi, ESPN Brasil

"For Juventus, he is a midfielder that attacks a lot. For Chile, is the brain of the team. Defends, creates and attacks very, very well." - Gian Oddi, ESPN Brasil

"A very complete midfielder who contributes both in defense and attack, where he often appears in goal-scoring positions, Vidal has had an amazing season and looked in top form for the World Cup, but is now working against the clock to recover fully from knee surgery." - Vito De Palma, ESPN Argentina

No. 17 - Vidal is more than a midfielder, 'He is the brain' of the Chilean team #WorldCupRank http://t.co/Hj4wxliYjb