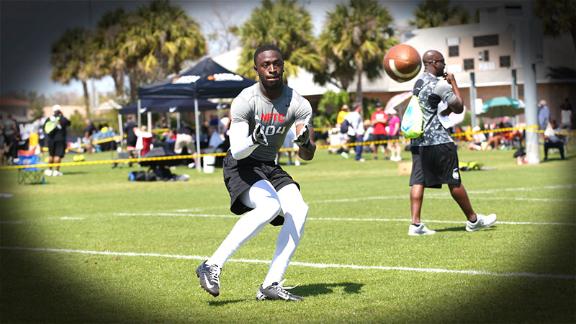 The No. 1-ranked wide receiver and the No. 6 player overall in the ESPN Junior 300, Nate Craig, verbally committed to Auburn on Monday evening. The 6-foot-2, 202-pound wide receiver chose the Tigers over USC, Alabama and Ohio State.

The athletic junior-to-be from Tampa Catholic High School in Florida announced his decision via Twitter and later confirmed with ESPN.

I will be taking my talents to Auburn University! #WDE pic.twitter.com/8lSreVGBJf

- NITRO (@NitroNate9) July 22, 2014The talented athlete, who spent all of last week at Alabama, said his relationship with the Auburn coaching staff is ultimately what won him over.

"I just thought Auburn was the best fit for me," Craig said. "I got to go up there this weekend and spend some time with coach [Dameyune] Craig and coach [Gus] Malzahn and that just sealed the deal for me. I was at Alabama for the whole week, but just building a relationship with the Auburn coaches and coach Craig was a big impact on my recruitment and did a great job. With coach Malzahn I got to spend some time with him and then I sat down with my mom and decided to make a decision."

Though college coaches are not permitted to talk about recruits publicly, the decision of Craig certainly made the Auburn coaching staff excited as evident by a few tweets that were sent out by co-offensive coordinators Dameyune Craig and Rhett Lashlee following Craig's decision.

- Rhett Lashlee (@rhettlashlee) July 21, 2014The athletic pass-catcher who totaled 37 receptions for 502 yards and 12 receiving touchdowns as a sophomore, said Auburn fans can expect to get a hard working player when he gets on campus.

"I'm a hard working - humble guy," he said. "A guy that is going to make his teammates better and keep my head on straight on and off the field and it's going to be a fun time playing in front of the War Eagle fans."

With the addition of Craig, the Tigers now have three 2016 commits, two of which are ranked in the ESPN Junior 300.