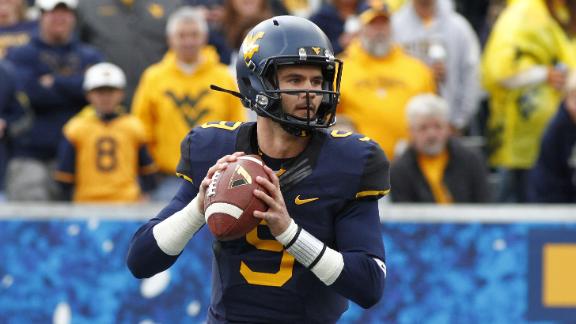 MORGANTOWN, W.Va. -- Morgantown authorities on Sunday assessed damage from riots that broke out following West Virginia's 41-27 win over No. 4 Baylor, while WVU president Gordon Gee warned students that he will not tolerate such behavior.

Crowds pushed over street lights and threw rocks, beer bottles and other items at public safety personnel and their vehicles. Numerous fires were set in the student-dominated Sunnyside area and other parts of the city.

"As a result of the dangerous behavior the events were declared riots,'' he said.

Law enforcement agencies from several jurisdictions responded to the riots. Police used pepper spray and chemical munitions to disperse groups of rioters after they ignored warnings to disperse. Preston did not say what type of chemical munitions was used but said the rioters were dispersed without any serious injuries.

"It is unfortunate that some fans, not all of whom were students, engaged in riotous behavior following the football team's outstanding victory over the 4th-ranked Baylor Bears. The focus should have been on celebrating our team, coaches and their achievement,'' WVU said Sunday in a statement.

Police and WVU officials are reviewing social media posts and videotapes regarding the incidents. Any student found to be involved will face sanctions, up to and including expulsion, the university said.

"This is not acceptable Mountaineer behavior,'' Gee said in the university's statement. "It is criminal and will be dealt with as such.''

The incidents began shortly before 10:30 p.m. Saturday in Sunnyside and spread to other parts of the city, including the central business district.

"The extent of damage throughout the city is currently unknown but will be assessed over the next couple of days,'' Preston said.

Morgantown and WVU have been trying for years to end the long-standing tradition of setting fires to celebrate athletic victories and other events.

In 2012, about 40 street and trash container fires were set following WVU's 48-45 win over Texas. During that post-game celebration, police officers wearing riot gear used pepper spray and CS gas to disperse an unruly crowd of about 1,000 people who gathered in the streets in Sunnyside.

West Virginia Uses Second-Half Surge To Upend Baylor
Clint Trickett threw for 322 yards and three touchdowns to lead West Virginia to a 41-27 victory over No. 4 Baylor.