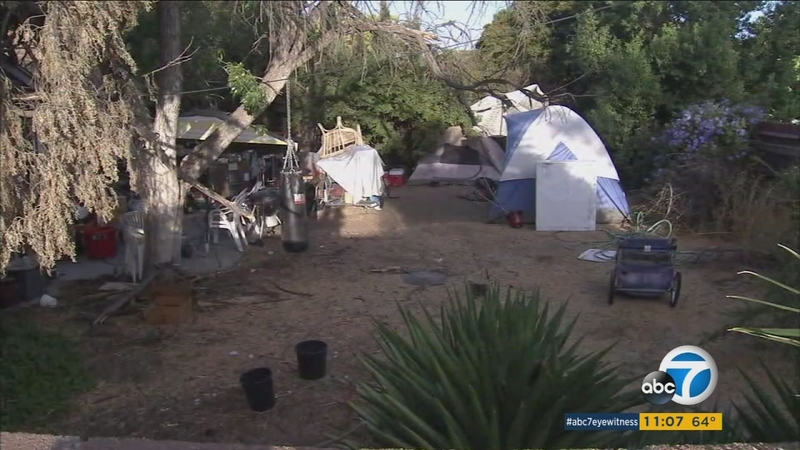 GRANADA HILLS, LOS ANGELES (KABC) -- A Granada Hills neighborhood is at odds over squatters who've moved into a neighbor's backyard.

Neighbors said transients have been living among them on their suburban street, and authorities aren't able to help.

"I don't see kids playing outside no more. Even my mom, she doesn't walk outside anymore," neighbor Aram Guekguezian said.

Dozens of people on the block claim transients have been living at the home for more than one year.

"There's a constant flow of about six or seven and an untold number of bikes that come here and people through the middle of the night," said Eddie Hawkins, who lives next door to the home.

He claims the homeless who live here defecate in the backyard, party in the middle of the night and leave a mess behind.

"There's consistent drug use. Police show up. They can't do anything because (the people) say they're allowed to live there per the owner," he said.

That homeowner is a Vietnam veteran, who hadn't spoken to his neighbors until now. But when Eyewitness News knocked on the door, we were met with a homeowner who said he's helpless and in need.

"I've asked her to leave several times, but she keeps coming back with more stuff," said Jerry Kent.

He said he let a woman stay on his property this summer. She hasn't left and he said she's brought even more people to his home.

Neighbors said they're willing to help Kent get unwanted people off his property. For now, there's still a mess but it's one the community is willing to clean.