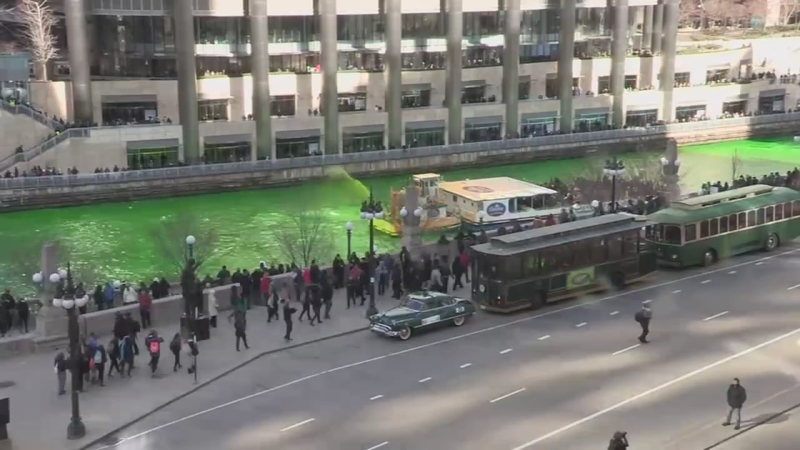 Thousands looked on as the Chicago Journeymen Plumbers Union poured in the dye to turn the river green at 9 a.m.

"One boat drops the dye into the water and it's an orange powdery substance and it's completely environmentally safe. Once the orange powder hits the water, it turns a vibrant green and the second boat follows and stirs it up to make sure that that dye spreads out," said St. Patrick's Day Parade Coordinator Pat McCarthy.

The tradition started back in 1961.

"The dye that we use is a leak detection dye that we use in plumbing pipes and apparently there were a couple guys doing it a lot one day, they came to the union hall and the business manager saw them covered in green...and he got the idea 'I wonder if we put it in the river, would the river stay green?'" McCarthy said.

Some vendors on the Chicago Riverwalk are open for the weekend and serve Irish-themed food and drinks.

The river dyeing was followed by the Chicago St. Patrick's Day Parade, which stepped off at noon with the Shannon Rovers Irish Pipe Band leading the way.

The parade began at Columbus Drive and Balbo before heading north on Columbus and ended at Monroe.

Organizers said more than 100 organizations took part. For crowd control, there were 120 parade marshals on hand to keep everyone safe. A blow-up Irish pub tent from Ireland was set up at the start of the parade for VIPs.