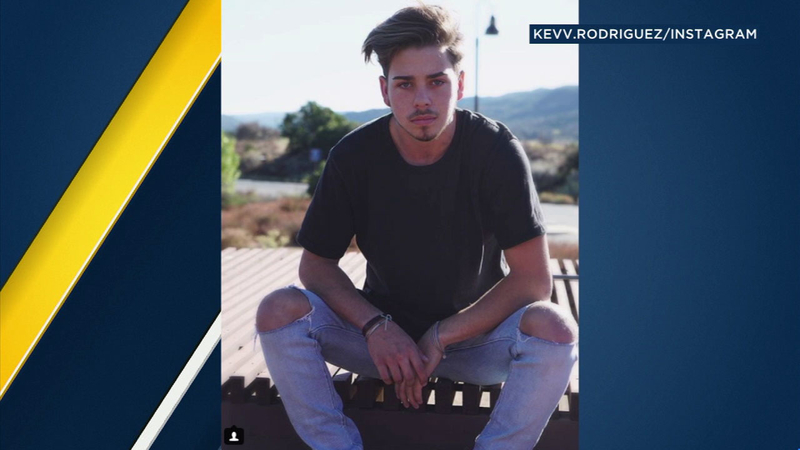 TEMECULA, (KABC) -- In an apparent case of road rage, a 19-year-old man was stabbed to death at a Walmart in Temecula and one person was detained at the scene, officials said.

Friends and family identified the victim as 19-year-old Kevin Rodriguez. He died in his girlfriend's arms, family members said.

"My son was a good boy," said Kevin's grieving mother, Traci Rodriguez. "He had lots of friends. I miss him so much."

The vicious choking and stabbing assault was caught on camera by the suspect, according to the victim's family.

"He got his phone like this, he started recording it. And with the other hand, first he choked him. Kevin was trying to get away and that's when he got stabbed," said Kevin's father, Atticus Rodriguez.

It began on the street as an apparent road rage incident and the suspect followed Rodriguez and his girlfriend into the parking lot, where a confrontation started, family members said.

Then after the stabbing, the suspect appeared to realize what he had done and had a change of heart.

"This guy was definitely in a rage for whatever reason," Atticus Rodriguez said. "When he realized what he did, he started helping him. Trying to bring him back to life. That was really weird. How do you do that to somebody, then realize what you did and try to help him? It makes no sense to me at all."

Kevin Rodriguez was described as a free spirit who loved life and lived it to the fullest. His Instagram account shows him performing daring flips from high elevations into water.

"I was always afraid and told him you're gonna get hurt," his mother said. "But I never thought he'd get hurt this way. This was a senseless act . This really was - over road rage. It took my boy away from me."

Riverside County Sheriff's Department deputies were called to the scene on a report of an assault around 12:15 p.m. in the 32200 block of Temecula Parkway. They found Rodriguez there with multiple stab wounds.

He was taken to a local hospital and pronounced dead.

Kevin Rodriguez was fatally stabbed at a Walmart in Temecula on Wednesday, Nov. 29, 2017.

Deputies detained another man at the scene who they described only as a "person of interest."

Investigators disputed reports on social media that said the fight was over a parking spot. They said that was not true.