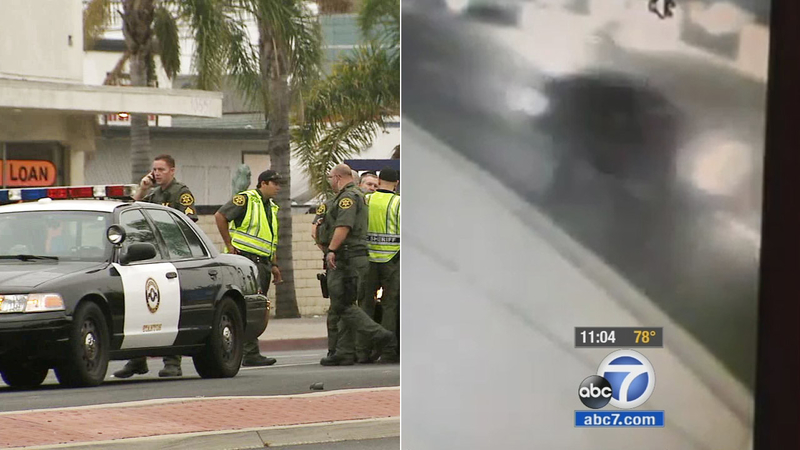 STANTON, Calif. (KABC) -- A cyclist who fell off his bike was struck and killed by a hit-and-run driver in Stanton early Tuesday morning.

The incident happened shortly before 4:45 a.m. on Beach Boulevard and Cerritos Avenue. Authorities said the victim was riding his bicycle on the sidewalk but fell off. He landed on the street and was struck.

Surveillance footage from a nearby business shows the victim lying in a lane on Beach Boulevard after falling off his bike. The video shows a witness running to help the man, but the victim is then struck by a dark colored SUV.

"The witness has indicated that the SUV ran over the victim, slowed down for a short time and then took off at a high rate of speed southbound on Beach Boulevard towards Katella Avenue," Lt. Jeff Hallock with the Orange County Sheriff's Department.

That victim died at the scene. Investigators believe he was coming out of an alley and was trying to turn when he fell.

Those who work and live nearby can't believe the driver didn't stop.

"It is still dark outside at 5 o'clock in the morning, so maybe they think they can get away with it, but I don't think it's the right way to do things," said Clark Taylor, a Stanton resident.

Orange County sheriff's deputies are asking any witnesses to come forward. They have a message for that driver who fled the scene

"We understand that situations like this happen very quickly and people tend to panic. If now, they are at home or somewhere and watching, we'd ask they call the sheriff's department," Hallock said.

The victim was not identified. Investigators were trying to enhance the surveillance video to get a better look at the suspect's vehicle.