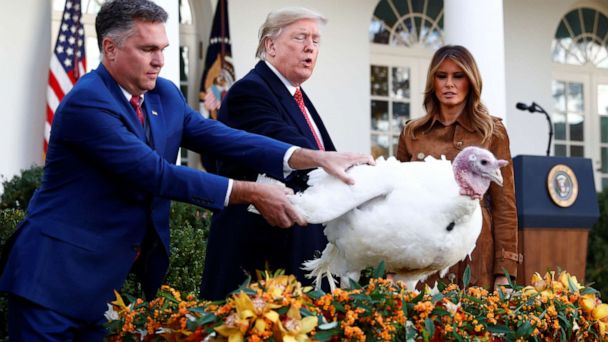 The House Judiciary Committee has scheduled its first public impeachment hearing, beginning a new phase of the inquiry on Dec. 4.

The hearing will look different from the House Intelligence Committee's open hearings with "fact witnesses" over the last two weeks, according to ABC News Senior National Correspondent Terry Moran, who calls this latest step a "decision-making point" for House Democrats.

"What would the articles of impeachment be? What would the indictment essentially against President Donald Trump be?" he says. "They're calling witnesses, constitutional scholars who can talk about impeachment. These are going to be witnesses that will advise them on what to make of it all."

The overall life expectancy in the U.S. has dropped for three straight years, according to a new study, as researchers point to opioid abuse, suicide and obesity as causes.

The study's author, Dr. Stephen Woolf, director emeritus of the Center on Society and Health at Virginia Commonwealth University, tells "Start Here" it's a problem unique to America, particularly in the Rust Belt: "It isn't lost on us that these are regions of the country that have been hit hard by the economy. ... That strain itself could affect health in ways that don't have to be limited to despair or unhealthy behaviors."

In the midst of war in Syria, doctors inside a hidden hospital known as "The Cave" fight to save lives underground.

'My home': President Donald Trump visited Florida for the first time since changing his place of residence for a rally Tuesday night. But he talked some of the same topics: impeachment, the Bidens, Nancy Pelosi and the "deep state."

Boo birds: First lady Melania Trump's visit to an opioid summit did not go well as she was greeted by loud boos when she took the stage.

'Absolutely brazen': Scary video shows a bus driver stop at a gas station, purchase beer and then drinking it as she transported 32 children.

'Angry that he was being ignored': A new police report details that the University of Illinois at Chicago student who was found dead in a school parking garage was apparently murdered after she ignored the suspect's catcalls.

Our Poll Shows That Buttigieg's Post-Debate Bump Is Still Just His Base: Pete Buttigieg saw the largest bump -- 6% -- of any candidate in a FiveThirtyEight/Ipsos poll. But where did that 6% increase come from?

There's no use in crying over spilled milk. But what about spilled donuts?

Well, the Brookhaven, Georgia, Police Department did just that on Tuesday and we couldn't be more empathetic. It turns out the officers were called to the scene where a Krispy Kreme truck had toppled over and the iced creations spilled all over the street.