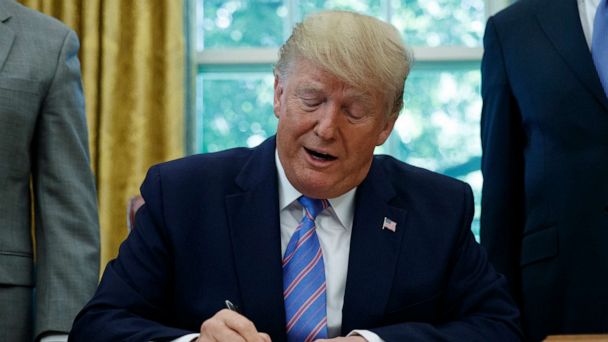 A day after President Donald Trump made history crossing into North Korea, Iran crossed a line of its own.

Iran breached the enriched uranium limits set in the nuclear agreement from which the U.S. withdrew a year ago.

Trump has continued to call for diplomatic talks, but Iran isn't budging. On Monday, the president said Tehran is "playing with fire," ramping up tensions in a similar approach to how he handled North Korea during the "fire and fury" phase, ABC News Chief Global Affairs Correspondent Martha Raddatz discusses on "Start Here."

"Let's remember," Raddatz adds, "that he is with Iran right now where he was with North Korea. The rhetoric is sort of the same, and that's what led them to that meeting, and that's clearly what President Trump thinks will lead him to a meeting with Iran."

Pro Publica published several of the posts from "I'm 10-15" on Monday, which included graphic images aimed at members of Congress and criticism over the widely circulated photo of a drowned man and his young daughter in the Rio Grande. One commenter suggested the photo was edited: "We've all seen the dems and liberal parties do some pretty sick things..."

Another group member encouraged agents to "throw a 10-15 burrito" at Reps. Alexandria Ocasio-Cortez, D-N.Y., and Veronica Escobar, D-Texas, ahead of the Congressional Hispanic Caucus' visit to a border patrol station under scrutiny in Clint, Texas. Ocasio-Cortez responded in a tweet on Monday: "They're threatening violence on members of Congress. How do you think they're treating caged children+families?"

U.S. Border Patrol Chief Carla Provost said in a statement the posts were "completely inappropriate" and "any employees found to have violated our standards of conduct will be held accountable."

Protesters demonstrating against an extradition bill in Hong Kong stormed the city's legislative building on Monday, smashing glass and spraying graffiti until riot police descended and launched tear gas at the crowd.

Discussion of the proposed bill, which would allow suspected criminals to be sent to China for prosecution, had been suspended as protests erupted over the last few weeks -- millions have flooded the streets of Hong Kong -- but this latest escalation went a step further, reports ABC News Foreign Correspondent James Longman.

"Protesters seem to be getting what they want, and in many respects that might be fueling this ... continued protest movement in Hong Kong," Longman says on the podcast.

Marshae Jones, 27, was five months pregnant when she was shot in the stomach during a fight in Alabama in December. Now her attorneys are fighting charges from the state that she intended to cause the death of her fetus by allegedly initiating the altercation.

A grand jury indicted Jones on one count of manslaughter, but declined to indict the woman accused of shooting Jones, 23-year-old Ebony Jemison, after determining she opened fire in self-defense, according to prosecutors.

Lawyers for Jones filed a motion seeking to get the charge tossed on Monday, calling the indictment "completely unreasonable and unjust."

If charges against Jones stick, it could set a new precedent, according to New York University School of Law professor Melissa Murray: "Not only can we have these laws prohibiting abortion in all of these cases as Alabama has done, we can actually use other laws that are just ordinary criminal laws and direct them against pregnant women who are not acting the way we expect or want pregnant women to act."

'Great sorrow': A 27-year-old pitcher for the Angels is found dead in his Texas hotel room.

NBA free agency diary: Did the Sixers lose Jimmy Butler and ... get better?: Redick is gone; Butler was traded. But Harris and Simmons signed new deals, Al Horford was added, and the Butler deal brought an intriguing package of talent headlined by ex-Heat guard Josh Richardson.

Today we honor Cori Gauff, a 15-year-old tennis player ranked 313th in the world who just upset her idol, Venus Williams, in straight sets at Wimbledon.

"It's the first time I have ever cried after winning a match," Gauff told the BBC. "My parents will be super happy, my dad was jumping up every time I won a point. I'm so happy they spent all their time on me and my brothers and making sure we're successful.