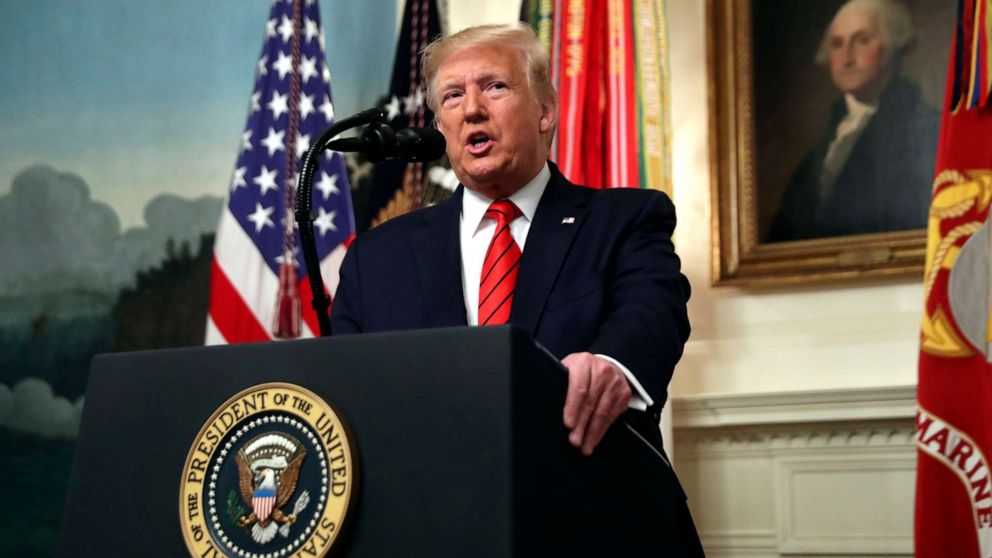 ISIS leader Abu Bakr al-Baghdadi was killed in a U.S. military operation over the weekend, President Donald Trump announced on Sunday, describing in detail what happened during the raid.

"He died after running into a dead-end tunnel, whimpering and crying and screaming all the way," the president told reporters at the White House.

"ISIS is not defeated and his death will not end it," she says. "You think of [Osama] bin Laden, his death did not end terrorism...so this is not over and you could see a resurgence."

"He has very relevant information and we do want him to come in and testify," Schiff said on ABC's "This Week."

ABC News Senior Editorial Producer John Santucci tells the podcast that testimony from Bolton, who was reportedly against the White House's efforts to pressure Ukraine into investigating former Vice President Joe Biden, could be very significant for the inquiry.

California Gov. Gavin Newsom has declared a statewide emergency as firefighters up and down the state battle massive wind-driven wildfires.

ABC News' Alex Stone joins "Start Here" from Sonoma County where the Kincade Fire has ravaged Wine Country, "There is, well was a home in front of me right now. All that remains is the chimney, nothing else."

'Lock him up!': President Donald Trump was showered with a chorus of boos followed by chants of "Lock him up!" at Game 5 of the World Series between the Washington Nationals and the Houston Astros when he was shown on the in-stadium video screen at Nationals Park.

'Our forever Congressman': Former Rep. John Conyers Jr., D-Mich., died at home while he was asleep, a family spokesperson confirmed. He was 90 years old.

'Hardest thing I have ever had to do': Following allegations of inappropriate sexual relations with a congressional staffer, Rep. Katie Hill, D-Calif., announced her resignation from Congress Sunday night.

'Look what just fell out of the sky': A Samsung pseudo space satellite parachuted from the sky and fell to the ground on a farm in Merrill, Michigan, on Saturday morning.

'Reese's Peanut Butter Cups come out huge here': The social contract of Halloween is simple: Provide adequate treats to costumed masses, or be prepared for late-night tricks from those dissatisfied with your offer. To help you avoid that type of vengeance, and to help you make good decisions at the supermarket this weekend, we wanted to figure out what Halloween candy people most prefer. So we devised an experiment.

A woman who underwent cancer treatment during pregnancy is celebrating the birth of her healthy baby boy. Jade Devis of Rancho Cucamonga, California, welcomed a son, Bradley, after two months of chemotherapy to fight Stage 2 triple-negative breast cancer--one of the rarest forms of breast cancer.

In January, Devis found a lump in her left breast. She said the pain was unbearable, but doctors at the time blamed the symptoms on her pregnancy. Devis had a biopsy in March and underwent surgery on April 9 to remove the lump. On April 29, she received a grade 3 breast cancer diagnosis.

"She received three cycles of chemo during the second and third trimesters of her pregnancy," Nagaraj said of Devis. "We took a full week break so she could safely deliver baby Bradley. Now she's completing the remainder of her chemo."

Bradley arrived on July 25 at 6 pounds,11 ounces. There were no complications with his birth.