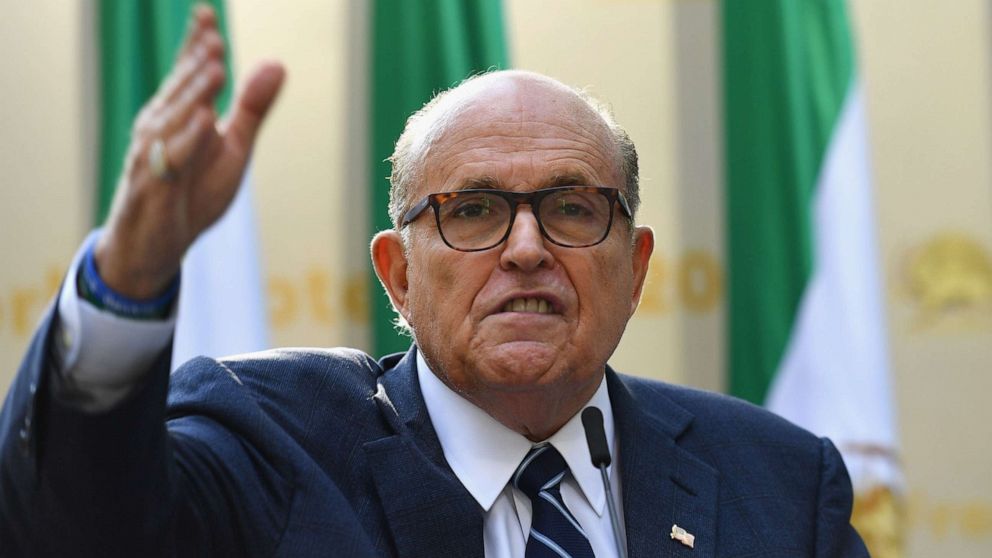 President Donald's Trump's personal lawyer Rudy Giuliani told ABC News on Tuesday he is not complying with a congressional subpoena.

Tuesday was the deadline three House committees had set for Giuliani to turn over documents related to the impeachment inquiry into President Trump.

ABC News Senior Editorial producer John Santucci tells the podcast that the ball is now in Congress' court: "they have to decide whether or not they are going to go to court and seek to enforce this subpoena of Rudy Giuliani."

12 Democratic candidates shared the stage last night in Westerville, Ohio for the 4th presidential debate, hosted by CNN and the New York Times.

ABC News Political Director Rick Klein joins the show from Ohio and says Elizabeth Warren was attacked like a frontrunner.

Gooding's attorney Mark Heller said "we are shocked, outraged, and absolutely dumbfounded that the district attorney's office has wasted the taxpayer's money, resources, and time in charging Cuba with these two incredulous cases."

Gooding Jr. pleaded not guilty in the original case, where he's accused of groping a woman at a bar.

ABC News' Adrienne Bankert tells "Start Here" that there could be more even more claims coming: "prosecutors are also citing twelve more instances where they say women they have talked to claim Gooding Junior inappropriately and unwittingly touched them as well."

"I don't want to get into a [verbal] feud with Daryl Morey, but I believe he wasn't educated on the situation at hand, and he spoke," James said before a game on Monday night.

And so many people could have been harmed not only financially, physically, emotionally, spiritually. So just be careful what we tweet and say and we do, even though, yes, we do have freedom of speech, but there can be a lot of negative that comes with that, too," James said.

Los Angeles Times columnist Bill Plaschke tells "Start Here" that many players and executives have been hesitant to speak out in favor of the protestors: "the Chinese government has proven it's the NBA's most influential owner."

'It just wasn't worth it': The Washington Nationals may have just booked their first trip to the World Series but the heated series taking place between the Houston Astros and the New York Yankees has caused some serious friction in the stands when an Astros season ticket holder attacked a Yankees fan in the stands.

'Terrible accident': The family of Harry Dunn, a British teenager killed when the wife of an American diplomat crashed into his motorcycle in August, visited the White House Tuesday for a meeting with President Donald Trump, according to the White House.

'Trapped in a hot vehicle': A 1-year-old girl died after being left inside a hot car for hours on Monday in Florida, marking the fifth hot-car death in the Sunshine State this year and the 50th nationwide.

'Door wide open': The U.S. delegation President Donald Trump is sending to try to negotiate a ceasefire and settlement between Turkey and U.S.-backed Syrian Kurdish forces will depart in the next 24 hours, a senior administration official said Tuesday.

'Most candidates ever on one stage': The night started out with the 2020 candidates' stances on impeachment, but we also saw some potentially big moments on health care, where Warren was grilled by some of the more moderate candidates on the stage. There was also a tense exchange between her and Biden in which Biden laid into Warren about his role in advancing one of her prize pieces of legislation through Congress.

The Salt Lake County Sheriff's search and rescue team headed up Grandeur Peak on Sunday evening as temperatures began to drop after several hikers had called police to report that a 190-pound mastiff named Floyd was on the trail with his owner and unable to move.

The sweet 3-year-old pup had been on a hike with his owner when he became too tired, authorities said.
Report a correction or typo
Related topics:
abc newsnational
Copyright © 2020 ABC News Internet Ventures.
More Videos
From CNN Newsource affiliates
TOP STORIES