Statue of Liberty climber speaks out after court appearance: 'I went as high as I could'

WABC
NEW YORK -- A woman was charged with trespassing, interference with government agency functions, and disorderly conduct for climbing the Statue of Liberty on the Fourth of July.

U.S. Parks Police evacuated Liberty Island after the woman, identified as 44-year-old Therese Patricia Okoumou, of Staten Island, climbed to the base of the statue in an apparent protest.

See the moment the NYPD apprehended the Statue of Liberty climber.

Okoumou pleaded not guilty to all charges in Manhattan Federal Court Thursday afternoon. Crowds cheered in front of the courthouse as she stepped up to a podium to speak publicly for the first time since the climb.

"Michelle Obama ... said when they go low, we go high. And I went as high as I could," Okoumou said.

Okoumou, who emigrated from the Democratic Republic of Congo in 1994, highlighted her opposition to the Trump administration and its immigration policies.

"Trump has ripped this country apart. It is depressing. It is outrageous," she said. "His Draconian zero-tolerance policy on immigration has to go.

Prosecutors, on the other hand, are calling the climb a "dangerous stunt."

"(This) alarmed the public and endangered her own life and the lives of the NYPD officers who responded to the scene," U.S. Attorney Geoffrey S. Berman said. "While we must and do respect the rights of the people to peaceable protest, that right does not extend to breaking the law in ways that put others at risk."

Reports of a person scaling the statue started came in around 3 p.m. Wednesday, shortly after a protest group calling itself Rise and Resist dropped a banner that read "Abolish ICE" from the base of the statue.

Officers responded to the scene with a helicopter and eventually scaled the statue to where Okoumou was located. At first, she put up a struggle with police officers.

Okoumou moved around occasionally and waved a T-shirt that read "Rise and Resist" and "Trump Care Makes Us Sick." She was also seen lying on her stomach and kicking her feet up behind her.

Meanwhile, officers tried to talk her down.

NYPD Detective Brian Glacken said Okoumou was talking about migrant children in Texas. At first, he said Okoumou was not friendly with police, but after some conversation, she began trusting the officers.

"The turning point was once we could safely go up. You know, I explained to her that we want you to come down, that would be the best way. I think the turning point was when we had a good rapport with her. And when we got her, she couldn't go any further, and I think she realized that her time was up there," Glacken said.

During the time of the standoff, visitors were taken off the island via ferry.

"We've had two unusual events occur back-to-back," National Park Service spokesman Jerry Willis told Eyewitness News. "So for the safety and security of our visitors, we decided to evacuate for the day."

"It's our busiest week of the year, historically," Willis continued. "The island at this time of the day is mostly near capacity, at 4,000 to 4,500 people. All boats have been tasked with moving people off the island. We have an evacuation plan. Given the heat of the day, the visitors complied with no issues."

"The person who climbed the Statue of Liberty was one of forty participants in our planned banner action, but her decision to climb the statue was made independently of the group, without consulting any other member of the group. We understand and share her desire to see the immediate release of children from detention and reunion with their parents. We hope that her legal representation will arrange for her release under her own recognizance."

Okoumou will return to court on August 3 for a status conference. Each count carries has a maximum penalty of six months in prison and a fine.
Report a correction or typo
Related topics:
new york citystatue of libertyprotestjuly fourthillegal climbingu.s. & world
Copyright © 2020 WABC-TV. All Rights Reserved.
RELATED 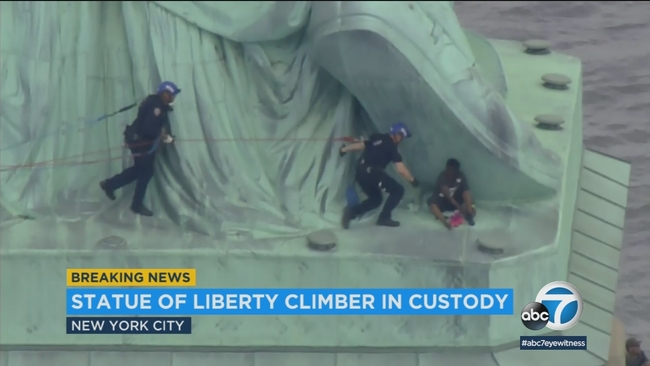