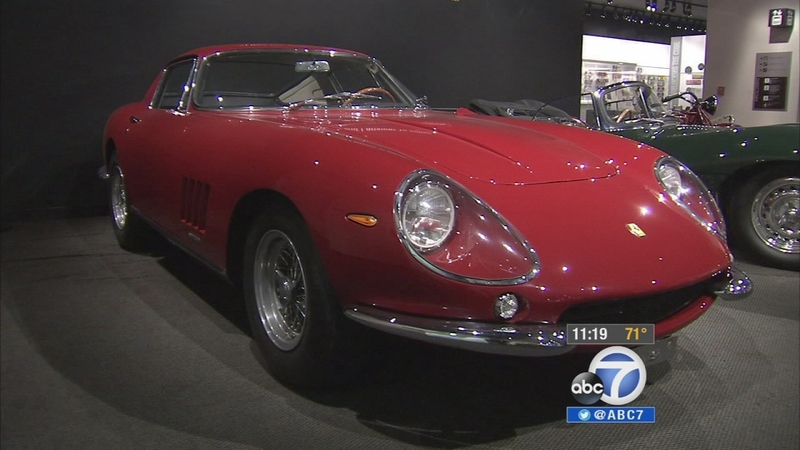 LOS ANGELES (KABC) -- Rare vintage sports cars on display at the Petersen Automotive Museum are not unusual. But two stand out as different.

They were both once owned by the late Steve McQueen.

His Jaguar XK-SS is in the museum's permanent collection. But his red Ferrari is paying a short visit before it heads to auction. And that is a big deal these days.

The actor was known for weaving fast cars into his movies and personal life. The ones that survive today are worth huge money thanks to the McQueen aura.

Matt Stone, author of "McQueen's Machines," has carefully tracked everything from cars to sunglasses - all bringing in big bucks.

"Two, three, sometimes ten times what a normal example would cost. That's some star power for sure," Stone said.

The strong prices for his cars became apparent seven years ago when another of his former Ferraris created a sensation.

"Two million dollars when the hammer fell," Stone said. "Nobody had ever seen such a phenomenon for a Hollywood car."

The Jaguar XK-SS was purchased by Bob Petersen, the benefactor of the museum, for its permanent collection in 2000. He paid $1 million at the time and its worth a lot more now.

"During the time Mr. and Mrs. Petersen owned the car, they received and declined one $20 million offer," Stone said.

But it's definitely staying put.

"There are certain cars that will never be for sale... The Jaguar XK-SS is definitely one of them," Kendall said.

Not the case for the McQueen Ferrari. It'll be an auction star in Monterey in a few weeks. And it is almost sure to fetch a record price from a new owner.