KABC
By Danny Clemens
HONOLULU -- Actor Daniel Dae Kim says he has COVID-19, the disease caused by the novel coronavirus, and is recovering in self-isolation at his home in Hawaii.

In an Instagram video posted Thursday, the "Lost" and "Hawaii Five-0" actor said he was shooting a television show in New York that stopped production as the new coronavirus began to spread. Stressing that he was asymptomatic at the time, Kim said he then traveled back to his family home in Hawaii.

"As the flight was landing, I started noticing some scratchiness in my throat which was unlike how I usually get sick," he explained.

Upon landing, he called his family doctor and later chose to self-quarantine. After he began to exhibit more symptoms, Kim went to a drive-thru testing facility in Honolulu, where he tested positive for COVID-19.

"The test itself was really awkward and a little painful because they shove a huge swab into your nose and into your throat, but it was worth it," Kim said, adding that he received it from "some incredibly professional and kind caregivers."

The test came back positive, and Kim remained isolated and on bedrest until his symptoms began to subside.

"Today, even though I'm not 100 percent, I'm pretty close," he said Thursday.

In his video, Kim addressed the reported instances of violence and prejudice against Asian Americans, slamming them as "cowardly" and "heartbreaking."

"Yes, I am Asian, and yes, I have coronavirus, but I did not get it from China. I got it in America -- in New York City. And despite what certain political leaders want to call it, I don't consider the place where it's from as important as the people who are sick and dying," he said. "If I did, I would call this thing the New York virus, but that would be silly."

He also implored young people to heed the advice of health authorities and practice social distancing to further prevent the spread of the virus: "If you treat this without care, you are potentially endangering the lives of millions of people including your loved ones. For the sake of everyone else, please follow the guidelines."

President Donald Trump was asked why he uses the phrase "Chinese virus" when discussing the novel coronavirus.

In response to concerns about celebrities and athletes seemingly getting tested more easily than others, he added that he did not "ask for or expect special treatment from anyone." He also apologized to those he came into contact with before he knew he was infected. 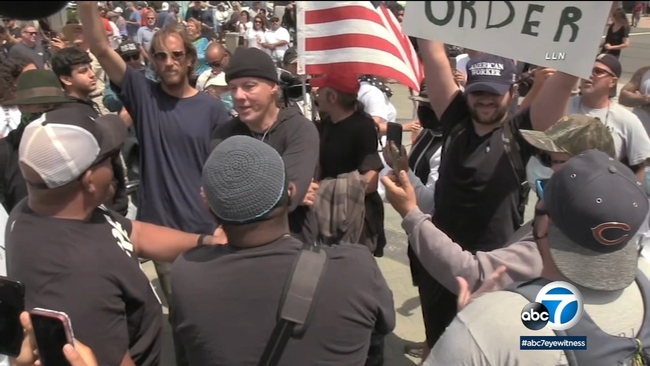 Cinema chain AMC warns it may not survive the pandemic