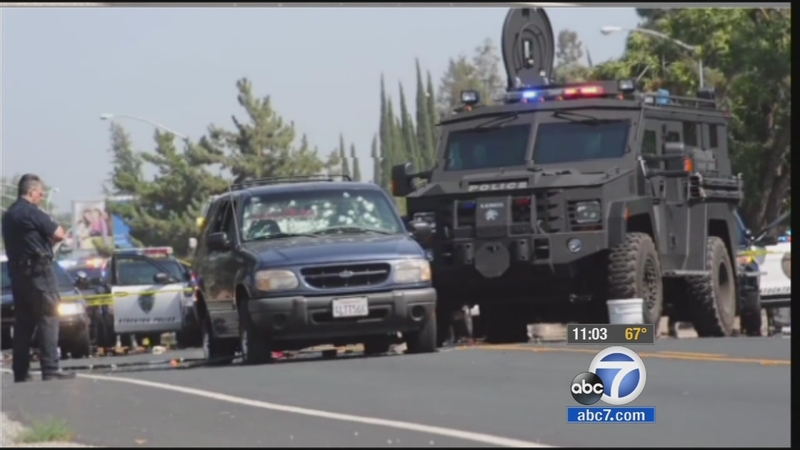 STOCKTON, Calif. (KABC) -- One hostage and two robbers are dead following a high-speed chase and chaotic bank robbery in north Stockton Wednesday. The incident involved the taking of hostages, a hail of bullets and a crime scene spanning two cities.

The incident began around 2 p.m. when three men armed with AK-47 style assault rifles held up a Bank of the West branch at Hammer Lane and Thornton Road. Police say the suspects had massive amounts of ammunition strapped to their bodies, and tied up a security guard.

Police say the suspects fired their guns at officers as they drove to Lodi and back to Stockton. Bullets from the suspects' weapons hit several police cars and homes that were in the line of fire.

"It was not just dangerous upon our police officers but they were shooting at other houses, other vehicles were shot that were not involved at all, so what I can say is they were trying to kill," Stockton police Chief Eric Jones said.

During the pursuit, two hostages were thrown from the vehicle; one suffered a gunshot wound and the other was treated for a grazing bullet wound. Both were transported to local hospitals and are expected to survive.

The SUV eventually came to a stop near Otto Road and Thornton Drive after police shot out the SUV's tires. That's when the suspects and police fired countless rounds of ammunition. All three suspects were wounded in the gunbattle; one was pronounced dead at the scene and the second suspect was transported to a local hospital, where he succumbed to his injuries. The third suspect remains hospitalized. His condition is unknown.

Witnesses say it sounded like five minutes of straight gunfire.

"In my 18 year of law enforcement, I've never seen anything like this in the city of Stockton," Stockton police Officer Joe Silva said.

Police say the remaining hostage was found shot to death inside the vehicle. The suspects allegedly used her a shield during the shootout. The victim's name has not been released.

"It was not clear and will not be for some time when the hostage was shot or by whom," Jones said.

Stockton police have offered their condolences to the victim's family. No officers were injured, despite the high number of shots fired during the pursuit.