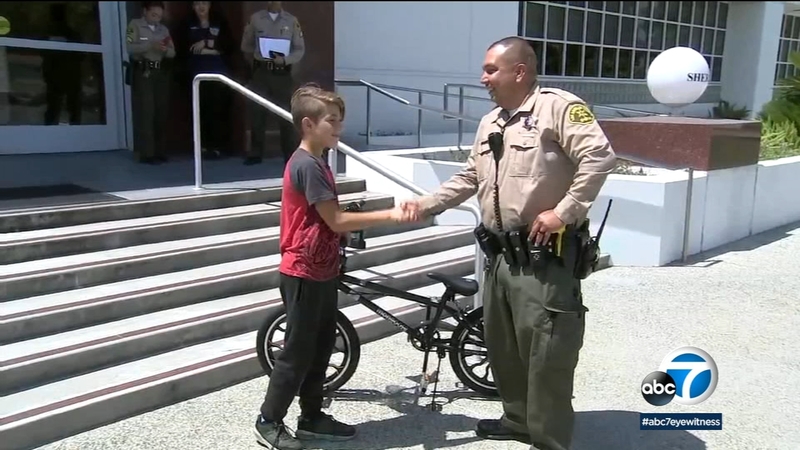 CERRITOS, Calif. (KABC) -- A 12-year-old boy in Cerritos had his bike stolen, so he googled, how do you report a stolen bike?

He not only got the answer and reported the theft himself, but ended up with a big surprise: a new bike courtesy of Walmart and Cerritos sheriff's deputies.

Brady Blair woke up to the bad news Monday morning. His orange Mongoose bike, his big gift for Christmas, was gone.

"They left a different one and Mom said it was just laying in the front yard and the bike that they left didn't work," Brady recalled. "The brakes were broken and there were other things wrong with it."

His mother, Kristen Blair, said her son was devastated by the theft.

"He was pretty shaken," she said. "He went out for a walk. I mean this is his love. It's what he does all day. So it's everything to him."

Brady decided he wasn't going to let the thieves off the hook. He googled the Cerritos Sheriff Station Neighborhood Watch number, and then called to report his stolen bike.

When Deputy Fernando Isaac showed up at the home, he says he was surprised to see Brady waiting outside - alone.

"I wasn't even home," said his mom. "He called me and told that he googled it up and called and the police came and took at report and I was like OK."

Deputy Isaac was impressed. He shared Brady's story with Sgt. Rene Garcia, and together they set out out to buy Brady a new bike.

But then Walmart stepped in, donating the bike instead.

"The officer really felt compelled," said Brianna Genoa with Walmart. "He wanted to do something for him, so when he told us the story we were happy to help."