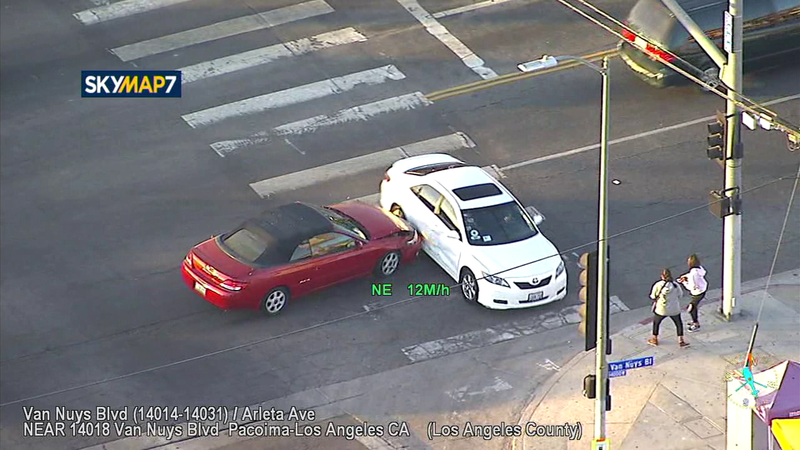 PACOIMA, LOS ANGELES (KABC) -- Police chased a stolen vehicle suspect in a red convertible through the San Fernando Valley before taking him into custody in Sylmar after he fled on foot.

The chase began in the Pacoima area. The driver flew down surface streets, hitting several cars and driving the wrong way at more than 90 mph at times.

The suspect ran through several red lights, including at Van Nuys and Arleta where he collided with a white sedan that had an Uber decal on it.

The Uber driver, Pablo Sanchez, said he was caught completely off guard. He had two passengers in his car when the collision occurred and said he feared hurting bystanders on the sidewalk.

The pursuit suspect pulled over in a Vons parking lot, fled on foot, jumped over a fence and into an apartment complex.

He changed his shirt at one point from a gray shirt to a black shirt.

A suspect was taken into custody after leading police through a high speed chase in the San Fernando Valley.

Los Angeles Police Department officers searched the area with guns drawn and told Eyewitness News they were able to locate him in part to AIR7 flying over the scene.