After 6-year legal battle, gates that restricted access to beach in Dana Point are removed 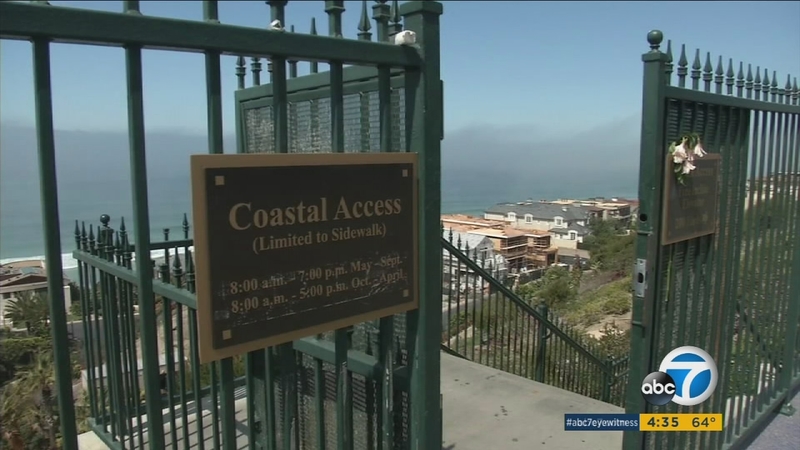 After legal battle, gates that restricted access to beach in Dana Point are removed

DANA POINT, Calif. (KABC) -- Gates that restricted public access to the popular Strand Beach in Dana Point have been taken down following a six-year legal battle.

The move comes as a victory for many residents, who often faced a locked gate long before the beach officially closed each day.

"The public has a right to the beach and have access to it, and so I'm really glad that this has happened," Dana Point resident Susan Whittaker said.

Stairs allow access from Strand Vista Park to the beach, but in between stands a private, multi-million dollar residential community.

In 2009, the city limited beach access at the urging of the oceanfront community developer, prompting the California Coastal Commission and the Surfrider Foundation to fight the decision.

"It was originally contracted to develop this with access and I think that they just thought over time they would able to change it," a resident named Jackie said.

Concern remained among certain homeowners who insist that access should be limited after dark.

"We've had people breaking into yards, not homes so much, going into people's private areas. (There's) actually YouTube video of kids jumping, hopping fences to swim in the community clubhouse," said a woman who lives in area.

A rope or chain will be used to prevent access when the beach is closed from 10 p.m. to 5 a.m., but some are skeptical it will keep people away.

"We don't mind the beach and the gates being open during the daytime when the beach is open," the homeowner added. "At night it just seems like, why are they going down there?"