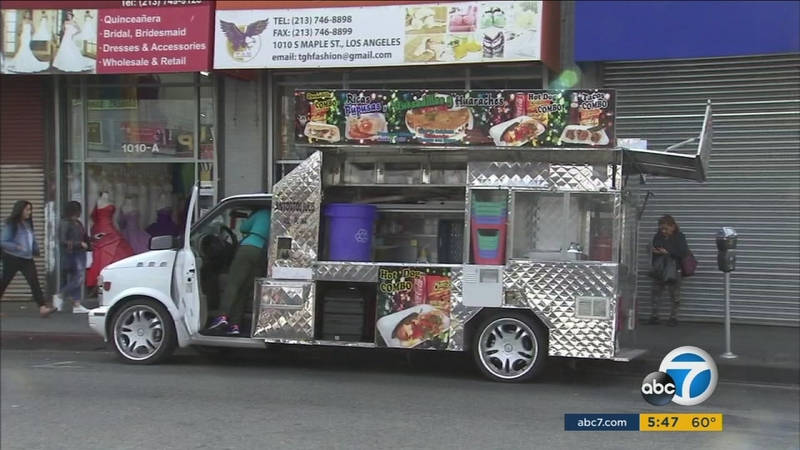 LOS ANGELES (KABC) -- A proposal to legalize and regulate street vending is one step closer to becoming a reality in Los Angeles after a City Council committee voted to move it forward Monday afternoon.

The Public Works and Gang Reduction Committee approved a regulated sidewalk-vending permit system with some requirements, which is the latest development of a three-year process.

The entire city council will still have to consider the permit system.

The sale of hot dogs, fruit, toys and other goods on sidewalks is currently a misdemeanor offense in the city, where some business-improvement districts have targeted cart-pushing vendors.

If the system is approved, it would replace criminal penalties with permits that are enforced through fines and property confiscation. It would allow vending in commercial and industrial areas in the city, as long as walkways are not obstructed and there are only two vendors per block.

Vending in residential areas would not be allowed, but there may be exceptions for smaller, mobile push-car vendors.

There has been an aggressive push to change some municipal laws in Los Angeles following President-elect Donald Trump's victory on Nov. 8, in light of his remarks on immigration during the campaign.

"A lot of our vendors are undocumented and they are the most vulnerable," Councilman Joe Buscaino said. "We feel that we want to do everything we can moving forward before Jan. 20 to decriminalize vending in the city of Los Angeles and remove all misdemeanor penalties."

Officials hope to remove the misdemeanor status of street vending by Jan. 18, which is the council meeting that takes place before Trump becomes president. The full ordinance may be done by the spring session for council members.

The L.A. Street Vendor Campaign, a coalition of 65 organizations and 400 local businesses, held a press conference Monday morning. One of the campaign members, Deborah Hyman, said that street vending has been criminalized in Los Angeles.

She added that the campaign has worked had to try and legalize street vending in the city. Another woman said she was able to pay for her car, bills and education thanks to the street-vending business.

Other cities have issued permits similar to the one proposed in Los Angeles.