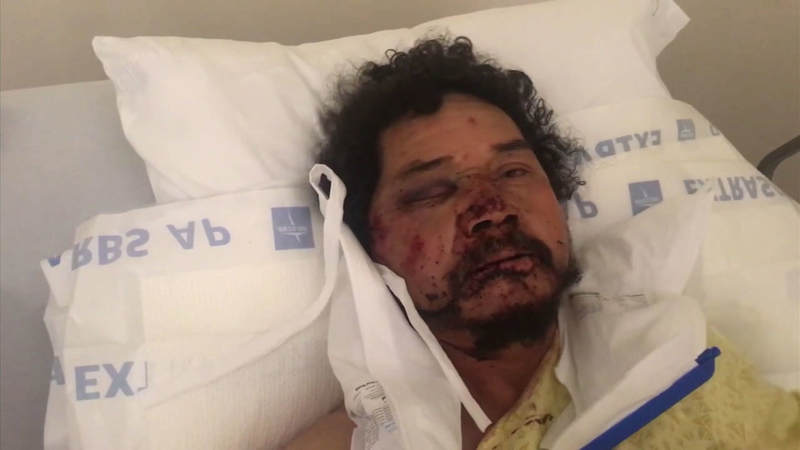 EXPOSITION PARK, LOS ANGELES (KABC) -- A group of street vendors were beaten near Exposition Park, with one of the men suffering severe head injuries that landed him in the hospital.

The 54-year-old is set to undergo surgery Monday at the hospital on his severely fractured face.

The search is now on for a group of five or six suspects - believed to be mostly men and one woman - responsible for the vicious attack.

Battered and bruised and barely able to speak, Pedro Reyes expressed his gratitude for the support after he was viciously attacked and robbed.

"It looks like they were out to kill him, from the extent of the injuries," said Reyes' stepson.

The injuries include severe facial fractures, missing teeth and lacerations.

The attack happened Sunday around 5 a.m. as Reyes and several other vendors were setting up their stands at 31st and San Pedro in South Los Angeles.

Investigators say two vehicles pulled up. A group of suspects - five or six men and one woman - got out and suddenly attacked.

They asked him for money. He threw money at them and tried to run away, but they chased him down and beat him even after getting the money.

Two other vendors suffered minor injuries, but Reyes bore the brunt of the attack.

"He has a very kind heart. That's what makes it so much more difficult. He's a very good man."

Reyes works six days a week as a roofer and on Sundays as a street vendor.

He came to the United States 10 years ago from Mexico to make a better life for himself.

With no health insurance and now no income he has no idea how he'll support his family.