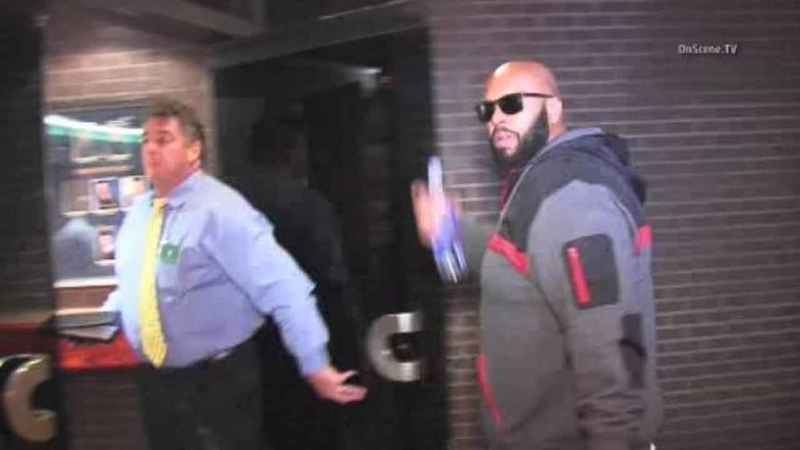 COMPTON, Calif. (KABC) -- Music mogul Marion "Suge" Knight has been arrested on suspicion of murder in connection with a deadly hit-and-run in Compton, the Los Angeles County Sheriff's Department confirmed on Friday.

The Death Row Records founder surrendered to authorities overnight in West Hollywood, wearing sunglasses and smoking a cigar. He was booked at the sheriff's West Hollywood station at around 3 a.m.

Lt. John Corina said Knight deliberately ran over two men at about 3 p.m. Thursday when he drove away from the parking lot of a Tam's Burgers fast food restaurant in the 1200 block of West Rosecrans Avenue.

His attorney James Blatt said Knight accidentally ran over and killed a friend named Terry Carter, 55, and injured another man, actor Cle Shaheed "Bone" Sloan while fleeing attackers in Compton on Thursday. Sloan was taken to a hospital but was not seriously hurt. The coroner's office confirmed Carter's identity on Friday.

Terry Carter is seen in a photo from the California DMV, left, and a photo provided by his family, right.

Knight's attorney claims the 49-year-old was attacked by at least four people while he was inside his car. Blatt said Knight was concerned for his safety because his assailants threatened to kill him. He tried to escape, which led to the hit-and-run. Blatt said Knight had no idea he struck anyone with his vehicle.

Blatt claims that Sloan was the one who instigated the altercation. The attorney said he hopes police will find surveillance footage that will prove this and exonerate his client.

According to authorities, Knight got into an argument on the set of a promotional shoot for the film, "Straight Outta Compton." Witnesses said they heard an argument before the incident and that the hit-and-run appeared intentional.

"All I hear is some arguing and something was going on, so I turn to look out and I seen Suge Knight turn around and go to his car. He backed his car up and put it in drive and then he hit Terry Carter. He ran him over twice," described Robert Smith, a witness.

While Blatt described Carter as Knight's friend, Carter's family released a statement on Friday saying the two were business associates who worked on several music projects together - not friends.

The statement also emphasized that Carter was not involved in any altercations in Compton and that Knight intentionally hit Carter twice with a car.

"Although Carter was present for the physical altercation, the family has asked that it be made CLEAR that he was NOT involved in any altercation. It was not an accident, it was murder," the statement read.

Prior to this incident, Knight was out on $500,000 bail in connection with an alleged theft of a paparazzi photographer's camera. He was scheduled for a court hearing on Tuesday.

Knight is being held in lieu of $2,025,000 bail. His attorney said Knight does not plan to make bail.