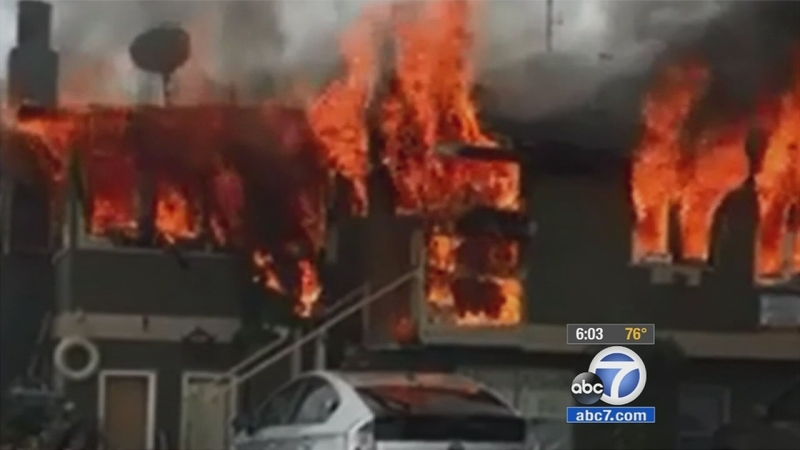 SUNSET BEACH, Calif. (KABC) -- A dramatic fire broke out at a two-story building in Sunset Beach Sunday morning. Two people caught inside had to race to safety.

The fire sparked just before 10 a.m. on Pacific Coast Highway and Broadway. Witnesses captured the roaring flames on video.

A man and woman inside an upstairs apartment smelled smoke and realized there was a fire, according to the Huntington Beach Fire Department.

The man escaped through the front door and went around to a side window to help his girlfriend, who had to jump to safety, fire officials said.

"It was extremely small, at first just a little bit of smoke," Gordon Stewart said. "In fact, we kind of joked and thought somebody was doing a smoke or barbecuing, and then the back room just completely burst into flames. The drapes were out, and then all of a sudden all the glass in the front part of the apartment completely blew out."

The man was transported to a hospital to be treated for minor burns. He was later released.

The woman was treated at the scene.

"I've lived here 22 years, and it's Adair Yachts. It's my business and my home," Nancy Adair said.

Adair was only able to save her goldfish; everything else is gone.

The building is made up of apartments in the upper level and two businesses -- a dry cleaners and a spa -- in the lower level. Officials said the apartments are a total loss, and the businesses suffered smoke and water damage.

Adair, who wasn't home at the time, says the blaze started in her office and says she has some suspicions about what may have happened.