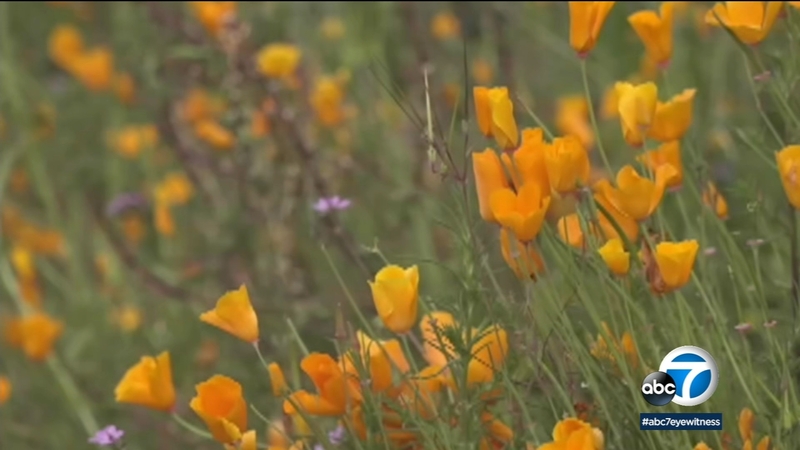 LAKE ELSINORE, Calif. (KABC) -- After shutting down access to the "super bloom" display because of large crowds descending to see the poppies, officials reopened Walker Canyon to visitors Monday.

Lake Street and Nichols Road have also been reopened, but officials warned parking is limited.

Following this season's heavy rainfall, the hillsides of Lake Elsinore were awash in a blaze of golden-orange poppies. The incredible sight attracted thousands of visitors.

The influx of people resulted in visitors flocking to the area, but flowers were being trampled and parking and traffic were getting choked up in the small community, leading to the city of Lake Elsinore closing Walker Canyon on Sunday.

The roads were so jammed that the city had to call in police officers from surrounding communities to help direct traffic.
"The City continues to evaluate all possible options to reduce the strain on our community, the freeway, and local roadways. At this time, it is not feasible for us to keep visitors away from #WalkerCanyon," a statement posted to the Lake Elsinore City Hall's Facebook page said.


The Facebook post stated the city is working on a "new plan and new options" for the coming weekend.

Visitors described the juxtaposition of the incredible sight of poppies brightening the hillsides against the backdrop of gridlocked traffic, full port-a-potties and trampled flowers.

One visitor said he was stuck in traffic for an hour and 45 minutes, leading to a strong feeling of irritation and road rage.

"One day it's 500 cars, the next thing you know it's thousands of them," he said. "It's like where do you even put all these people?"

Lake Elsinore Mayor Steve Manos said the city reopened Walker Canyon because it didn't have the enforcement resources to keep it closed. People were parking on the freeways and finding other entrances into the canyon, he said.

"We expended lots of resources over the last weekend," Manos said. "We have folks out there ticketing and towing cars once again."