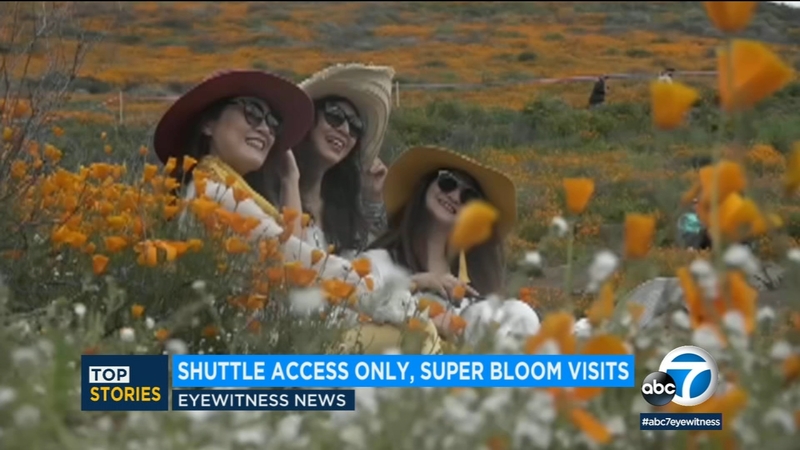 LAKE ELSINORE, Calif. (KABC) -- Lake Elsinore officials laid out a plan to control crowds and protect the golden-orange poppies that have attracted throngs of visitors to Walker Canyon, outlining certain road closures and procedures for the upcoming weekend.

As many as 40 deputies will be deployed starting Saturday to help with congestion in the area in a collaborative strategy involving Lake Elsinore sheriff's, California Highway Patrol, Caltrans and the city. To alleviate congestion, shuttle buses will be deployed to transport visitors to the poppies.

"This has been a crisis never experienced before, unlike anything we have faced in Lake Elsinore," said Michael Lujan, Police Chief of the Lake Elsinore Sheriff's Station during a Thursday press conference.

No parking will be available on Walker Canyon or Lake Street, and the only way to access Walker Canyon on weekends will be via shuttle service, Lujan said.

Visitors will have to pay $10 for the shuttle service, except for children younger than three. Shuttle service will start at 6:30 a.m. Saturday and last through Sunday.

Road closures affect parts of Lake Street and Nichols Road. Lake Street freeway exits on Interstate 15 near the super bloom will be closed in both directions, and designated lots will be available for parking near the Nichols Street exit.

"If we see any of these roads getting too congested, we will be forced to shut down the program again," Manos said. "Together, we can make this a much more manageable experience."

Residents were also asked to use alternate routes to ease congestion in the area.
The influx of visitors to Walker Canyon has overwhelmed the area, leading officials to close the poppy display Sunday before lifting the ban the following day.

Although the poppy fields are open, officials warned parking in the area is limited and said they were working on a "new plan and new options" for the coming weekend.

You think you've seen every angle of the super bloom in the Inland Empire? Think again.

Manos said the city reopened Walker Canyon because it didn't have the enforcement resources to keep it closed. People were parking on the freeways and finding other entrances into the canyon, he said.
Following this season's heavy rainfall, the hillsides of Lake Elsinore were awash in a blaze of golden-orange poppies. The incredible sight attracted thousands of visitors.

Cars have flooded the community and congestion has choked up the area, including on Interstate 15 and surrounding roadways. The roads were so jammed that the city had to call in police officers from surrounding communities to help direct traffic.