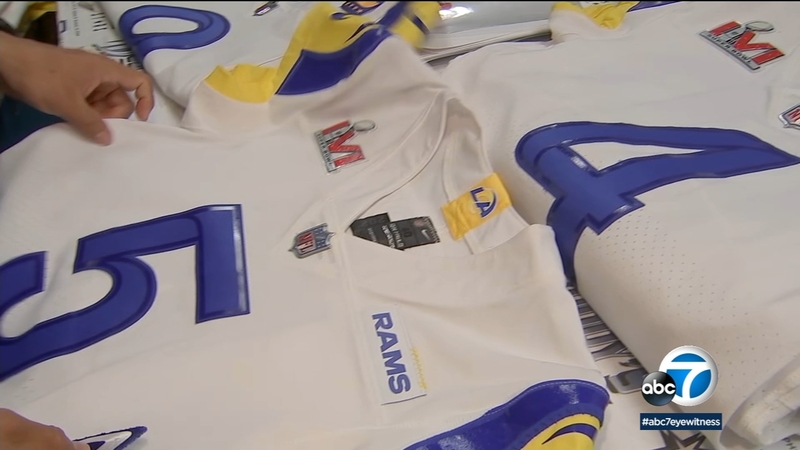 BURBANK, Calif. (KABC) -- It's not a Super Bowl jersey without an official Super Bowl patch.

Buddy's All-Stars in Burbank has tailored uniforms for the Rams since the team's return to Los Angeles and for the second time, their work is making an appearance at the big game.

There's a sense of pride for employees at the Burbank business.

"Being part of the biggest show on Earth is incredible," said Daniel Perez, the operations manager at Buddy's All-Stars.

By the time the Rams and Cincinnati Bengals step onto the field to play, Luis Fernandez will have sewn more than 500 Super Bowl patches on jerseys and sideline apparel.

"When he goes out and meets with these players it's incredible because they see this little man right here make all their dreams come true," Perez said about Fernandez.
Louis Talamantes started the business 41 years ago, and he admits it's been a wild and successful ride.

As the big game approaches, the Rams wanted to make sure an Inglewood beauty supply story continues to thrive.

So how did Buddy's land such an all-star client in the Rams? Like anything, connections - initially tipped off by their work with Division I colleges.

As for the game and the jerseys, Perez says Buddy's is more than prepared the second time around, but there's still nerves. But don't let that be confused for any lack of confidence.

"The outcome has to be our team winning for our city, knowing that we had our part in that winning uniform," Perez said. "It's everything to us."

As for the Bengals, they'll be wearing black jerseys with white pants.