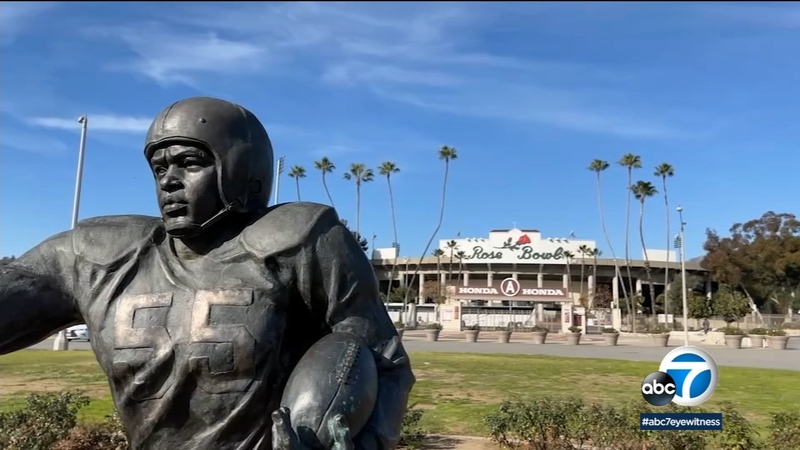 The Rose Bowl has a storied history hosting Super Bowls

PASADENA, Calif. (KABC) -- SoFi Stadium and its big date with the Super Bowl may be getting all the attention, but it follows in the footsteps of another Southern California stadium, one that was once a National Football League favorite.

"They love the Rose Bowl," said Rose Bowl General Manager and CEO Darryl Dunn, referring to the NFL. "We became, for a while, the most prominent Super Bowl stadium in America. We had five Super Bowls. One time, we had three in seven years."

The Los Angeles Coliseum hosted the first-ever Super Bowl when the Green Bay Packers defeated the Kansas City Chiefs in 1967. It also was the home to 1973's Super Bowl VII.

But then the NFL fell in love with the Rose Bowl. Its huge seating capacity, amazing surroundings and rich history drew the big game to the Rose Bowl for Super Bowl XI when the Oakland Raiders beat the Minnesota Vikings.

In 1980's Super Bowl XIV, LA's own Rams lost to the Pittsburgh Steelers in Pasadena. The Washington team, then named the Redskins, beat the Dolphins in Super Bowl XVII three years later.

"The first Jumbotron for an NFL game was here," Dunn told Eyewitness News. "The (first) NFL experience and of course the halftime show's first sort of mega-star was in 1993 when Michael Jackson performed."

"For a while, LA didn't have an NFL team," Dunn explained. "And the NFL had their own rule that you need to be an NFL stadium and have a team. It took a while, but SoFi came around, and the Super Bowl is back."

Brand-new SoFi has indeed lured the NFL's biggest game back to Southern California. But when you watch this year's Super Bowl, tip your hat to the long, rich history of the soon-to-be 100-year-old Rose Bowl.