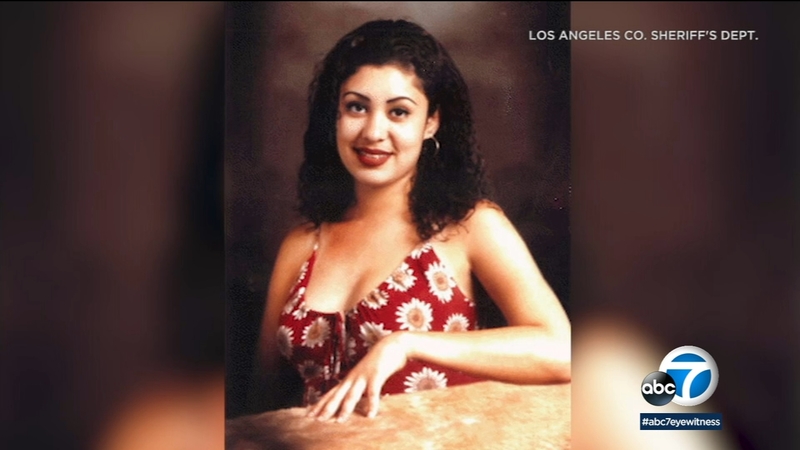 Jose Luis Garcia, 42, is under arrest for Arellano's murder after DNA evidence linked him to the crime.

Garcia, who was 18 at the time of the murder, lived a mile from the Arellano family in Boyle Heights.

Family members say it feels surreal to know that the suspected killer had been caught.

"Definitely felt anger, too that we have a face and name of the person who brutally murdered her," said the victim's sister Elizabeth Arellano.

Neither investigators nor Arellano's family know how the two met.

Arellano's partially clothed body was found dumped off Topanga Canyon Road in Malibu on Jan. 30, 1996. She had been sexually assaulted and strangled.

Investigators collected DNA samples in 1996 but there was never a match in the state database until late last year.

Garcia was arrested by LAPD Mission station detectives in November 2019 for domestic violence.

Until that time, Garcia had lived a quiet life as a roofer and only had minor crimes on his record.

"Those times were for misdemeanor offenses up until the 2019 arrest for the spousal abuse," said Det. Joe Purcell.

Purcell is one of 12 investigators who had retired from the sheriff's department but returned to work in the Unsolved Case unit.

Garcia was arrested in Dallas and is now jailed in Los Angeles with bail set at $1 million.

Detectives credit science and the persistence of the Los Angeles County District Attorney for enabling the arrest.

"It is an evil case but it is rewarding that we are able to seek justice and we are on the road to have that happen," says Purcell.
Report a correction or typo
Related topics:
boyle heightsmalibulos angeles countyarrestmurderdnacold case
Copyright © 2021 KABC-TV. All Rights Reserved.
More Videos
From CNN Newsource affiliates
TOP STORIES