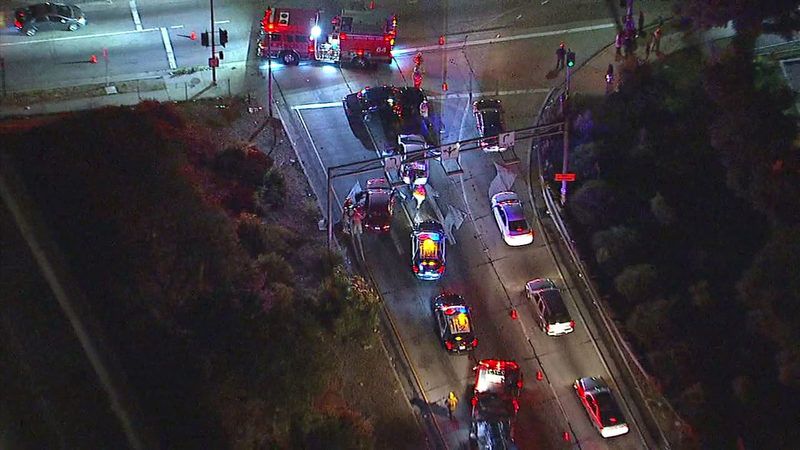 WATTS (KABC) -- A suspect fleeing police crashed into a car carrying five children and then ran onto the 105 Freeway in the Watts area, officials said.

The suspect crashed into the cars - a red vehicle and a white SUV - at the end of the pursuit.

"Everything was quick," said a father who only wanted to be identified as Beto.

Beto was in the white SUV along with his five children after a night of trick-or-treating.

"I just felt something bang me through the back," Beto said. "They crashed me, and all I hear is my kids crying."

His two-month-old son was taken to the hospital as a precaution.

The other victims in the red car included a young child. AIR7HD captured the child being cradled by his father.

The suspect was taken into custody, but the eastbound 105 was closed in the area as officials investigated. It was later reopened.

The suspect was seen taking off along the freeway, stopping to grab the door handle of one car, but the driver doesn't slow down and takes off.

The suspect continued on the freeway, approaching another vehicle and throwing himself on the hood. He laid down in front of the vehicle and blocked its path.

Shortly after, officers surrounded the suspect and took him into custody.

Police say only the two-month-old child was injured.