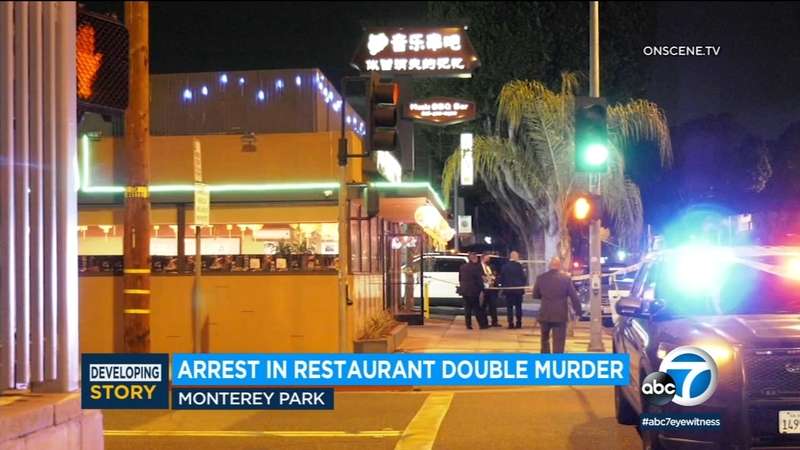 MONTEREY PARK, Calif. (KABC) -- The alleged killer of a man and woman gunned down at an Asian restaurant in Monterey Park was taken into custody Wednesday, authorities said.

Jing Yixin, 38, of Monterey Park, was detained by a task force of investigators at the Mexican border on Tuesday, according to the Los Angeles County Sheriff's Department.

Yixin, also known as Yixin Jing, is believed to have been the husband of the woman killed in Monday's attack, who was identified as Ling Ling Wang, 36, the sheriff's department reported.

The male victim was identified by the Los Angeles County coroner's office as Zhaiming Li, 37, of Pomona.

A man and woman were killed in a shooting at an Asian restaurant in Monterey Park, and the suspected gunman was on the loose Tuesday morning, police said.

The shooting occurred around 6:30 p.m. Monday at a restaurant in the 500 block of West Garvey Avenue, east of Atlantic Boulevard, said Deputy Tracy Koerner of the sheriff's department.

The victims suffered multiple gunshot wounds to the upper body and were pronounced dead at the scene, Koerner said.

"During the course of the investigation, detectives identified the suspect and attempted to locate him,'' a sheriff's department statement said. "Homicide detectives, with the assistance of the U.S. Customs and Border Protection officers, and the FBI/LAPD Fugitive Task Force, detained the suspect at the Mexican border Tuesday.

"The suspect was transported to (the) Monterey Park Police Department, where he was arrested for the murders ... (on) Wednesday,'' the statement continued. "Detectives believe suspect Yixin is the husband of victim Ling Ling Wang, and the father of two children they share -- daughters age 9 and 12. The motive is unknown at this time and the search for the weapon continues.''

Earlier, sheriff's Lt. Charles Calderaro said he did not believe the killings were a hate crime.

"Based on the preliminary information, it does not appear to be any random act or hate crime,'' Calderaro said. "It appears that this individual targeted these individuals.''

The shooting occurred at the Music BBQ Bar.

The sheriff's department was assisting the Monterey Park Police Department with the investigation. Anyone with information on the crime was urged to call the Sheriff's Homicide Bureau at 323-890-5500.