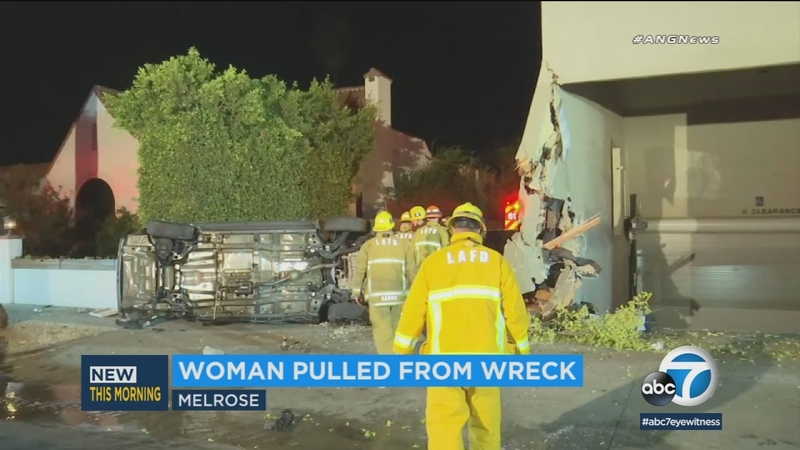 FAIRFAX DISTRICT, LOS ANGELES (KABC) -- A woman is being investigated on suspicion of a hit-and-run crash Wednesday morning, after she was rescued from a violent wreck that sent her car rolling on Melrose Avenue.

Police said the incident all started as a hit-and-run, and the woman, driving an SUV, was being followed by the vehicle that she allegedly hit near Highland Avenue and Santa Monica Boulevard.

Officials said it appears the driver in that vehicle was following the woman in an attempt to exchange information.

The woman was then involved in a second, more violent crash with a white BMW on Melrose Avenue and Alta Vista Boulevard, where the SUV flipped over before slamming into a building. The wreck occurred around 1:30 a.m.

News video shows the bloodied woman being removed through the vehicle's windshield by firefighters. The woman appeared OK, but officials did not immediately release details on the extent of her injuries.

Officials at the scene would not immediately confirm whether drugs or alcohol were a factor in the crashes, but they said the woman will be investigated for suspicion of being involved in a hit-and-run.