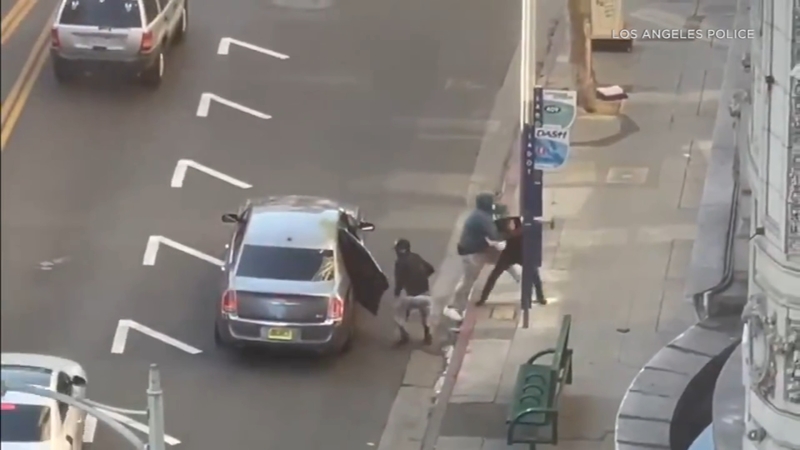 Suspects sought in armed robbery of family in DTLA

DOWNTOWN LOS ANGELES (KABC) -- Police are seeking the public's help in identifying four suspects accused in an armed robbery that was caught on surveillance video in downtown Los Angeles.

Shortly after 3 p.m. Thursday near 7th and Hill streets, a man, woman and their 2-year-old child were shopping when two people jumped out of a car and pointed guns at them, according to the Los Angeles Police Department.

The suspects stole the family's property, pistol-whipped the 26-year-old father on the head and shot him in the arm, according to police. The mother, 28, "ran to safety with her son and was not harmed."

The father was taken to the hospital for treatment for a gunshot wound and laceration to his head.

Footage from the scene shows the father in a physical struggle with the suspects before they got back into the gray Chrysler 300 and drove off westbound on 7th Street.

Police describe the suspects as three men in their 20s who were all wearing different colored hoodies, as well as a female driver.

The Chrysler had dealership paper license plates that read: "KEYES."