KABC
By Leanne Suter
PACOIMA, LOS ANGELES (KABC) -- Raymond Torres, a youth coach who faces deportation, spoke publicly for the first time Monday after being detained by ICE agents in front of his 7-year-old son's school in Pacoima.

"I'm very scared. I've never been to Mexico. I have no family in Mexico. That's like throwing me to the rats to become homeless," he said.

He was released Friday on a $15,000 bond. Torres' attorney, Erika Roman-Maury, said ICE violated its own arrest guidelines.

"My client's constitutional rights were violated. This was a seizure, plain and simple. They had no right to pull him over and take him into custody the way they did," she said.

She also said the popular 30-year-old youth football coach was mistreated and abused while in federal detention, and that he was taken to a medical unit twice for dehydration.

But ICE said Torres is in the U.S. illegally and has a criminal record for a DUI, drugs and domestic violence.

Torres and his attorney said they were all misdemeanors that were resolved years ago and that he has turned his life around. He's now a father of two and manager at a solar installation company.

He was brought to the states when he was 3 years old. Torres' fiancee said she fears he will be ripped from the family.

"The way he was treated was...it's unfortunate and it's sad because he's not an animal. He's a human being," Araceli Galvez said.

Torres is awaiting his next detention hearing. His attorney said she plans to file a complaint with ICE about her client's treatment as well as other legal remedies in the case.
Report a correction or typo
Related topics:
sylmarpacoimalos angelessan fernando valleylos angeles countyimmigration reformfamilydeportationiceimmigration
Copyright © 2021 KABC-TV. All Rights Reserved.
RELATED 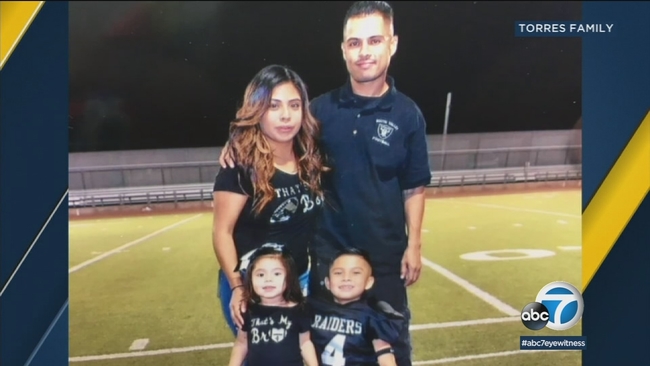