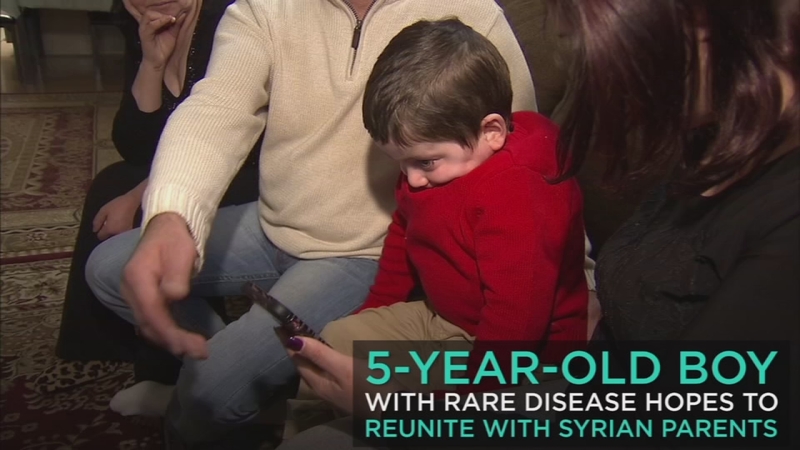 CANYON COUNTRY, SANTA CLARITA (KABC) -- The family of a 5-year-old boy who suffers from a rare disease are begging for help to get his Syrian parents into the states to be with him.

Tony Alsabaa hasn't had an easy life. He suffers from juvenile idiopathic arthritis, which is complicated by infections and a secondary syndrome. He also has several fractures on his spine and will need years of treatment.

Tony is a U.S. citizen, but his parents are not and are from Syria. The only way he can see his parents is on the phone.

It has been six months since he left his parents and seeing them is always overwhelming.
EMBED More News Videos

The family of a 5-year-old boy who suffers from a rare disease are begging for help to get his Syrian parents into the states to be with him.

Tony was born here while his parents were visiting from Syria, which is how he became a citizen. Once he became ill in Syria and doctors couldn't find a cause or cure out there, he was allowed to come to the U.S. - but his parents weren't.

They were barred from getting a visa by the embassy for fear they would never return. That, in addition to President Donald Trump's travel ban has meant there is little hope for a family reunion.

"(His mother) pray for the God to help her to come to see Tony because she don't know when she can see Tony," his aunt, Fadaa Assaff, said.

But his family here in the states contacted a lawyer. They are also asking anyone and everyone for help.