What is Sarahah, the app beating Instagram in the app store? 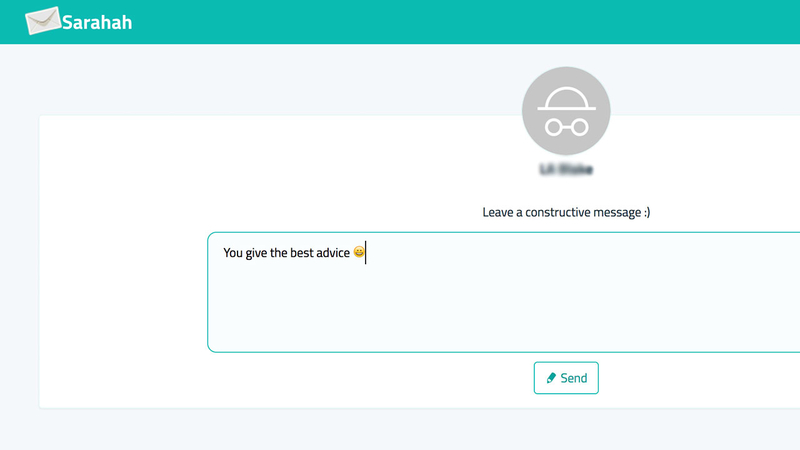 It's at the top of the app store's charts, beating out YouTube, Instagram and other social media platforms. But what is Sarahah and why is everyone talking about it?

Here are common questions about the viral new app.

Sarahah is the latest popular anonymous messaging app. Its creator, Zain al-Abidin Tawfiq, told Mashable that he originally intended it as a way for employees to give their bosses constructive feedback to help encourage honesty in the workplace. He later decided to make it available for anyone to send messages.

Tawfiq said that he wants to create a more positive environment than other anonymous apps.

Why is everyone talking about it?

The app has exploded in popularity since it was made available in the app store in June. The app store said last week it's currently the top app in 30 countries.

#Sarahah in a month:

Sarahah began in Saudi Arabia, where Tawfiq is from, and spread to other Arab countries, eventually getting an English version.

The app received a bump in popularity, according to Mashable, when SnapChat released an update which allowed users to share a link in a snap. This means you can share a link to your Sarahah account in SnapChat.

How does it work?

Creating an account generates a link to an individual's comment page. Users share links to that page on their SnapChats accounts, Facebook pages and elsewhere so their friends know where they can leave comments.

Once comments are left, they appear without attribution when you open the app.

Do I have to create an account to use it?

You have to create an account in order to receive messages but not necessarily to leave them.

If someone's account is public, anyone can leave a comment. However users can turn this option off by making the account private so that only users they have added can leave messages.

What does the name mean?

It is an Arabic word which has been translated by various media outlets as "candor," "frankness" and "honesty."

Is it really anonymous?

Yes, according to Tawfiq. There were rumors circulating earlier this month that Sarahah would be revealing who wrote what, but the app insists that this will not happen.

What are the dangers?

No matter Tawfiq's intentions, parents have raised concerns about the potential for bullying, as with any anonymous messaging app. Experts advise parents to have a conversation about bullying and online safety with their children and teenagers.

Tawfiq told the Financial Times he is taking steps to combat bullying and negativity.

"Because it is the actual goal of the website, I really want Sarahah to improve communication," he said.

Unlike some other anonymous messaging apps, photos cannot be included in messages. Also, messages go directly to the person they are intended for and are not public. Certain words are automatically filtered out, according to the Financial Times, and there is a process for blocking an IP address if someone becomes a problem.
Related topics:
technologyyoutubebullyingsocial mediatrendingtechnologyu.s. & worldmobile appappinstagramanti bullyingappssnapchat
Copyright © 2021 KABC-TV. All Rights Reserved.
More Videos
From CNN Newsource affiliates
TOP STORIES