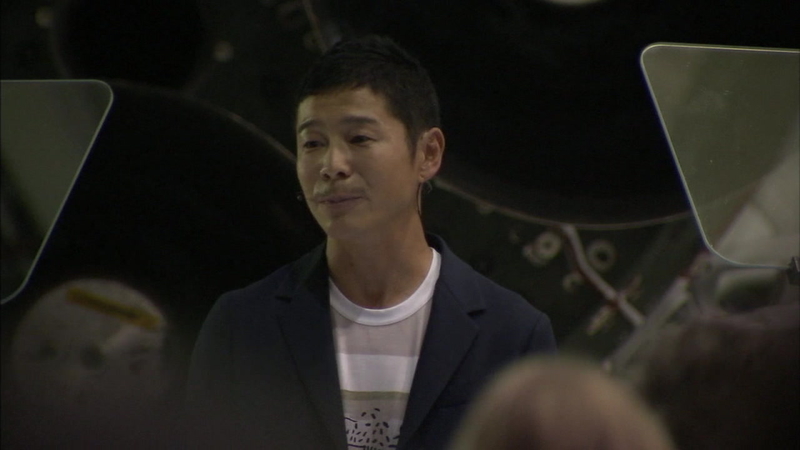 LOS ANGELES (KABC) -- SpaceX founder Elon Musk announced that the first private passenger to fly on a trip around the moon will be Japanese billionaire Yusaku Maezawa.

Maezawa said he wants to bring six to eight artists with him on the Hawthorne-based company's Big Falcon Rocket. He plans to speak with artists from various fields including painting, sculpture, music, film and fashion about going on the trip.

"Ever since I was a kid, I loved the moon...I choose to go to the moon," Maezawa said during a press conference at company headquarters.

He asked people to imagine what artists such as Picasso or John Lennon would have produced if they had the chance to see the moon up close.

Maezawa has established a website, dearMoon, to outline his plans.

The amount of money Maezawa is paying for the 2023 trip was not disclosed. Musk described it as a significant amount of money that is helping to pay for the BFR program.

Musk said the overall BFR system - a reusable rocket used for more than just this mission - could cost around $5 billion. Musk said the BFR is designed to land on any surface in the solar system.

During the press conference, Musk did say there is a chance the rocket could fail.

Both men know it could be a dangerous journey. Musk added that the person who is attempting this feat has to be a "very brave person."

Maezawa made his fortune in online fashion retailing and has also established a reputation as a collector of high-end art and a supporter of art-related causes.

Before getting into fashion, he was a drummer in a rock band and at age 18 he moved to Southern California to skateboard, staying for about a year before returning to Japan and getting into the business side of the music industry.