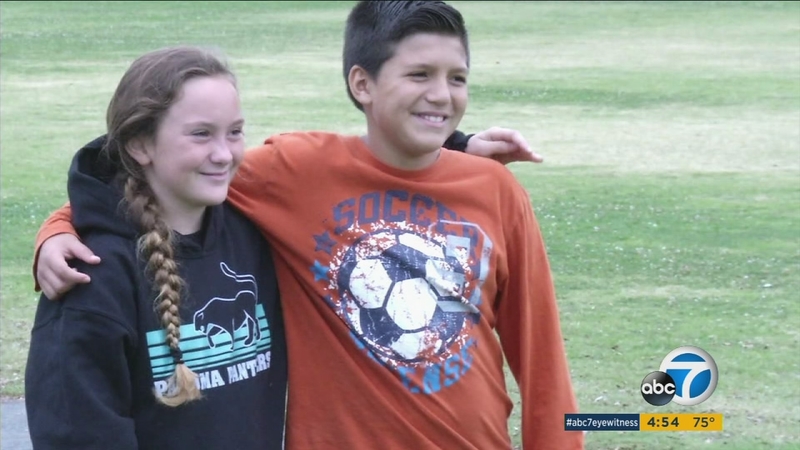 TEMECULA, Calif. (KABC) -- A young Temecula girl captured the hearts of ABC7 viewers after she didn't allow a language barrier to keep her from inviting a new student to join her for lunch.

The story of Rafael and Amanda was first brought to ABC7's attention using #abc7eyewitness.

The 10-year-old boy had recently moved to Temecula from Mexico and is now attending Paloma Elementary School.

He said his biggest challenge is not speaking English.

"When the teacher speaks to me and sometimes I don't understand," Rafael said.

Rafael's classmate Amanda noticed he was having trouble making friends and used the smart phone app to reach out.

"Since I don't speak Spanish and that Google Translate can I thought I would write it instead," Amanda explained.

Amanda's letter read, "Would you like to sit with me today? Look for me and I will show you where I sit. We can color or simply tell scary stories. Thank you for your time, signed Amanda."

Rafael said the letter made him feel very happy because he said Amanda wanted to be his friend.

He also said that no one had given him a letter before.

Rafael said Amanda would be his friend forever.

Paloma Elementary school awarded Amanda for her act of kindness, naming her the student of the month on Friday.

The families of the children also got the chance to meet.

Rafael's mother said her son felt nervous because he couldn't understand his classmates. She said she thinks what Amanda did was wonderful.