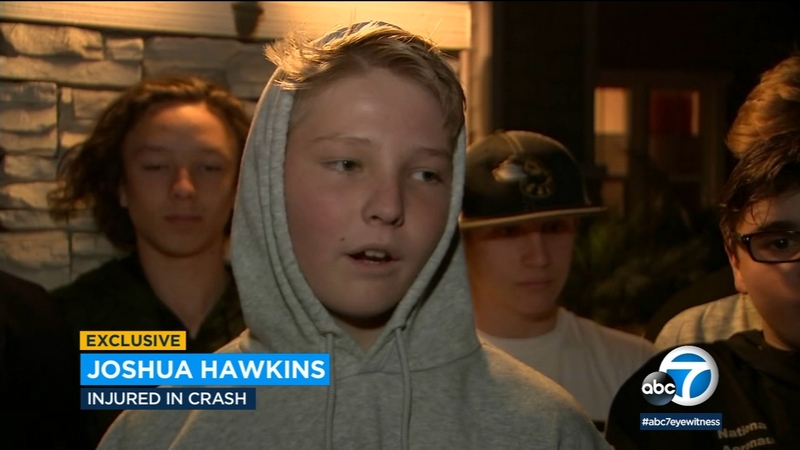 CORONA, Calif. (KABC) -- Joshua Hawkins, 13, got a surprise and heartwarming welcome home from the hospital after surviving a horrifying car crash.

Joshua was one of six teens who were involved in a disturbing incident in Temescal Valley, in which a man is accused of intentionally ramming a vehicle that held Joshua and his friends.

The resulting crash left three dead and three injured. Among the three killed were Joshua's 16-year-old brother Daniel, along with their friends Drake Ruiz and Jacob Ivascu.

Joshua was left with fractured ribs and a cracked pelvis. He is using a walker as he recovers.

"Having them all there meant a lot to me," Joshua said.

Prosecutors allege the 42 year old driver of the other car - Anurag Chandra - intentionally rammed the teens' Prius-causing it to lose control and slam into a tree.

Investigators allege Chandra was chasing them down after they played a trick on him-by ringing his doorbell and running away. He's now charged with three counts of murder and three counts of attempted murder.

Daniel Hawkins was a gifted athlete - in rugby, karate and football.

"I was Daniel's biggest fan on the football field," said his mother, Janet Hawkins. "We just had that bond."

"It is overwhelming," said his father, Craig Hawkins. "We can't hide that."

Joshua did not want to talk about the crash. His family says he does not recall the impact-but he remembers what led up to it.

"He said he was scared," Janet Hawkins said. "They all got scared because the man kept pursuing them and they just couldn't get away."

In addition to the murder chargers, prosecutors filed a special circumstance allegation which could make Chandra eligible for the death penalty.

Joshua's family says their strength comes from their community and their church.

"We're not out for vengeance," said Craig Hawkins. "We're Christians. We're not out to get this guy even though what he did was horrific.

"We just want him to own it, say I'm responsible, and I own my actions."

"Without our faith I would be lost, with no hope," said his sister, Sarah Hawkins.

A Celebration of Life is being held in memory of the three teens who died in the crash. The public is welcome. The event is being held at Crossroads Church, 2331 Kellogg Ave., Corona, at 4 p.m. on Tuesday, Jan. 28.
Report a correction or typo
Related topics:
coronariverside countytraffic fatalitieshit and run
Copyright © 2021 KABC-TV. All Rights Reserved.
More Videos
From CNN Newsource affiliates
TOP STORIES