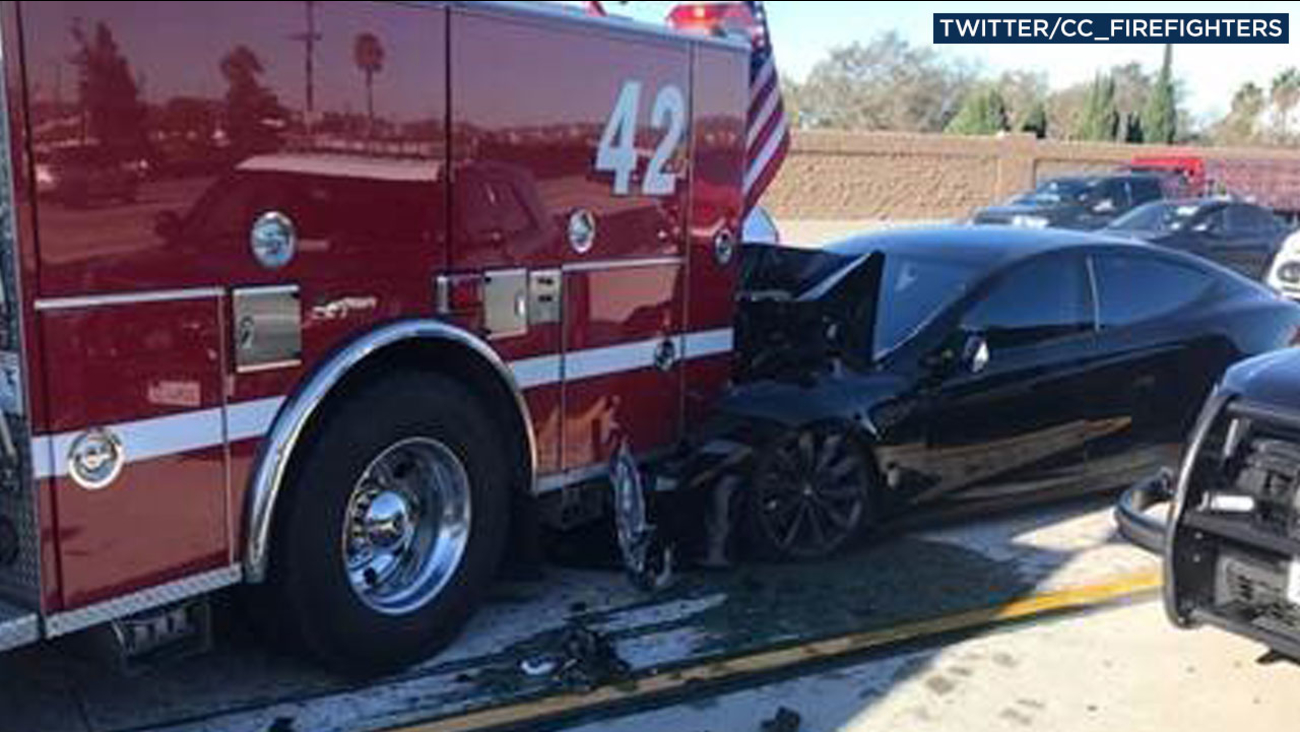 A mangled Tesla Model S is shown on the 405 Freeway after it crashed into the back of a Culver City fire truck in Culver City on Monday, Jan. 22, 2018. (Culver City Firefighters' Union)

CULVER CITY, Calif. (KABC) -- Federal agencies are investigating a crash that involved a Tesla Model S that may have been on its Autopilot system on the 405 Freeway in Culver City.

The vehicle crashed into the back of a fire truck on the freeway Monday, but the driver wasn't injured, authorities said. The National Transportation Safety Board and National Highway Traffic Safety Administration will investigate the driver and vehicle factors.

The Autopilot feature keeps a vehicle centered in its lane at a set distance from cars in front of it and also changes lanes and brakes automatically. Tesla released a statement following the news of the investigation.

"Autopilot is intended for use only with a fully attentive driver," the statement said.

While working a freeway accident this morning, Engine 42 was struck by a #Tesla traveling at 65 mph. The driver reports the vehicle was on autopilot. Amazingly there were no injuries! Please stay alert while driving! #abc7eyewitness #ktla #CulverCity #distracteddriving pic.twitter.com/RgEmd43tNe

Two investigators from NTSB were sent to Culver City Tuesday, while the NHTSA said Wednesday it would be sending out a special team.

In Monday's crash, the highway patrol said the southbound Tesla hit the rear of the Culver City firetruck, which was parked at an angle in the carpool lane while firefighters tended to a crash on the opposite side of the freeway. The truck was unoccupied at the time, and no injuries were claimed by anyone at the crash scene, according to the CHP.

The Model S Autopilot is a level 2 on a self-driving scale of 0 to 5. Level 5 vehicles can operate autonomously in nearly all circumstances. Level 2 automation systems are generally limited to use on interstate highways, which don't have intersections. With level 2 systems, drivers are supposed to continuously monitor vehicle performance and be ready to take control if necessary.

Tesla has taken steps to prevent drivers from using Autopilot improperly, including measuring the amount of torque applied to the steering wheel and sending visual and audio warnings. If the warnings are ignored, drivers would be prevented from using Autopilot, the company has said.

NHTSA, which regulates auto safety, declined last year to issue a recall or fine Tesla as a result of the crash, but it warned automakers they aren't to treat semi-autonomous cars as if they were fully self-driving.