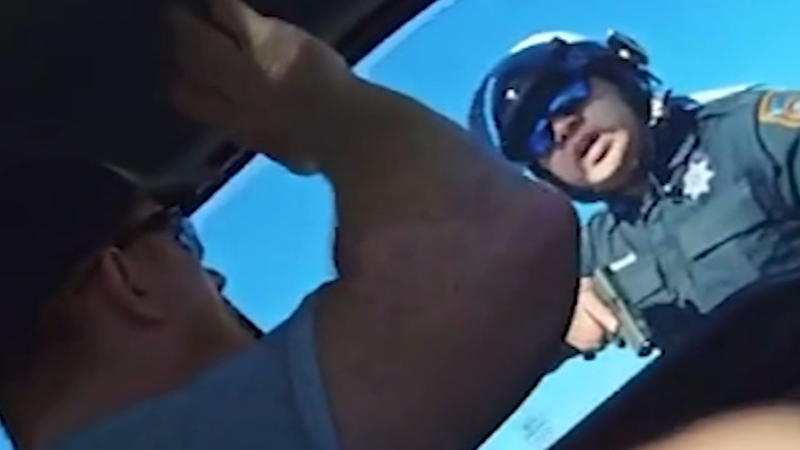 Deputy caught on video pulling gun on man in traffic

HOUSTON -- An investigation is underway after a video surfaced showing a Texas deputy pulling a gun on a driver in Houston Monday afternoon.

George Dickerson said he and his work partner merged onto the freeway and got caught in a funeral procession.

"I really just wanted to get in front of that car, so I did that," Dickerson recalled. "The cop in the front slowed down, so I couldn't go around. Then, the other one came around and I was like 'What? What's going on?' He was like 'Stop.'"

Dickerson told ABC13, ABC7's sister station in Houston, that before he could stop, the officer in front of him slammed on the brakes, so he did the same, as well as the deputy behind him.

"He went around the truck, stopped and parked in front of us," Dickerson said. "I'm in the left lane in the middle of the freeway and he gets off his bike with his gun drawn and comes at me and as soon as I see his gun drawn I put my hands in the air and said, 'I don't want any trouble.'"

Dickerson's co-worker, riding in the passenger seat, captured what happened next on video. The video shows the deputy with a gun in his hand and the driver with his hands up.

The deputy, who has not been named, can be heard saying "I'll [expletive] kill you."

Dickerson said he was driving his work truck at the time and was not armed. Both he and his colleague said they thought about the encounter into the night and Tuesday morning.

"He's trained to handle himself, as well as people on the street," Dickerson said. "You would think his training would help him to not have that road rage. That's not something you do every day - is threatening to kill somebody. If I threatened to kill somebody, I would go to jail. If I held a gun to whomever and said 'I'm going to kill you,' that's a terroristic threat."

The Harris County Sheriff's Office posted a tweet Monday evening stating they were aware of the video circulating online and an investigation was taking place. They also confirmed the deputy seen in the video has been relieved of law enforcement duties and placed on administrative duties pending the outcome of the internal investigation.

Dickerson said he has not heard from the sheriff's office since the incident.